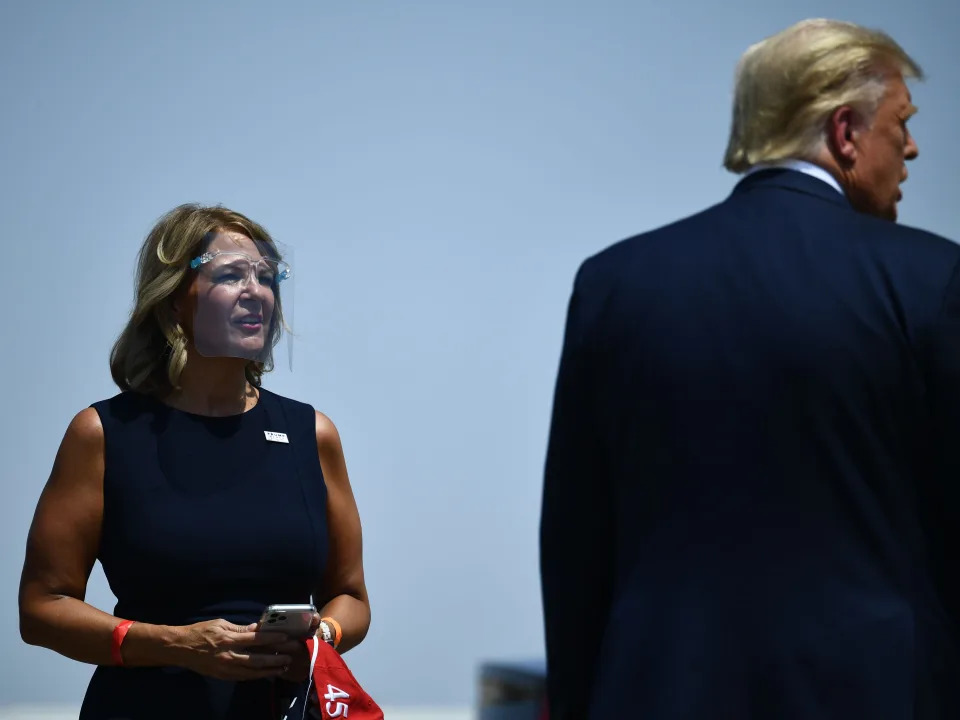 Kelli Ward (L), the chair of the Arizona Republican Party, greets President Donald Trump as he arrives to deliver remarks on immigration and border security at the international airport in Yuma, Arizona on August 18, 2020. BRENDAN SMIALOWSKI/AFP via Getty Images

The officials planned to install an alternate set of electors to vote in favor of Donald Trump after a vote count had determined Joe Biden had won the presidential election. A   similar plan   was in place in Georgia, where some of the would-be electors   could face charges   for election interference, conspiracy, and racketeering.

Kelli Ward, the chair of the Arizona Republican Party, and Kelly Townsend, a state senator, both raised concerns about the plan that Trump's legal team circulated, according to emails published by   The New York Times .

"Ward and Townsend are concerned it could appear treasonous   for the AZ electors to vote on Monday if there is no pending court proceeding that might, eventually, lead to the electors being ratified as the legitimate ones," Kenneth Chesebro, a lawyer working for Mr. Trump's campaign, wrote in a 2020 email published by   The New York Times .

The word "treasonous" appeared in bold.

The email was sent to a group that included Trump's personal lawyer, Rudolph Giuliani.

Ward, despite her concerns, ultimately supported the plan and signed a document that falsely claimed to be a "certificate of the votes of the 2020 electors from Arizona" and falsely asserted that Trump won the state's 11 Electoral College votes.

Representatives for Ward and Townsend did not immediately respond to Insider's requests for comment.

That's exactly what it is, it doesn't appear treasonous, IT IS.  Every single one involved needs to be behind bars.

Every single one involved needs to be behind bars.

"Ward, despite her concerns, ultimately supported the plan and signed a document that falsely claimed to be a "certificate of the votes of the 2020 electors from Arizona" and falsely asserted that Trump won the state's 11 Electoral College votes."

Seems pretty cut and dry, she needs to go to jail along with those who pressured her to commit election fraud.

Republicans were declaring election fraud was happening, they just didn't want anyone to know they were the ones actually doing it.

As of today, the Arizona GOP is culpable of putting up CORRUPT candidates for a U.S. election. If the federal government allows it unchallenged: Will the nation be complicit through commission or omission of election tampering?

That is, has a crime occurred already in Arizona?

I have family in that state. my uncle is totally teabagged, my aunt drank herself to death, and my cousins are all traumatized victims of conservative induced insanity.

Goons all over the world SAY that elections they lose are stolen from them.  It happens everyday some where on the planet. Meathead Donald is a contagion. And Arizona's GOP has caught a bad case of Trump. This is serious.

It may behoove the Independent Party to make moves on the Arizona State GOP by questioning its legitimacy to be a political party. In that, it is bringing discredit upon the state, mocking and skirting the rule of law, and giving liberty and freedom a "f-up" reputation! This among many other things!!

Az is the land of heat-calcified brains and half baked rwnj's.

they went past treason 2 years ago...

Arizona is so full of 'hit. How the "h" do you in 2022  primary vote as a valid party for a slate of people who have already explained that in 2022 they plan to cheat, be vindictive, and flout rule of law? In other words, accomplish the treasonous activity/ites they failed in 2020-2021?

HOW STUPID ARE SOME PEOPLE?!  The whole world is watching CORRUPT ARIZONA voting to rig elections and then out of the other sides of their mouths, this country wants to lecture third world countries about election integrity?!

ARIZONA GOP YOU ARE THE DEFINITION OF CORRUPT.

that state has been iffy since before the last civil war...