"[Aleksandr] Dugin is on the U.S. sanctions list against persons guilty of aggression against Ukraine," media reported.

The daughter of a Russian "propagandist" with close ties to President Vladimir Putin was reportedly killed in a car explosion Saturday night in Moscow that could have been meant for her father. Several international media outlets and the Washington Post have reported the incident, in which videos show a vehicle completely engulfed in flames.

Daria Dugin, who's the daughter of Aleksandr Dugin, was reportedly in the vehicle when the vehicle exploded Saturday evening.

"A Toyota Land Cruiser Prado exploded near the village of Velyki Vyazomy in the suburbs of Moscow, as a result of which the driver died, law enforcement agencies informed us," Russian state media TASS reported, also cited by the Washington Post .

"The daughter of key Putin adviser Aleksandr Dugin was killed in a car explosion in the Moscow region, according to Russia's state-run media outlet Tass. Daria Dugina was reportedly driving her father's car from a festival they attended when the detonation occurred, engulfing the car in flames, a friend of Dugin's told Tass." 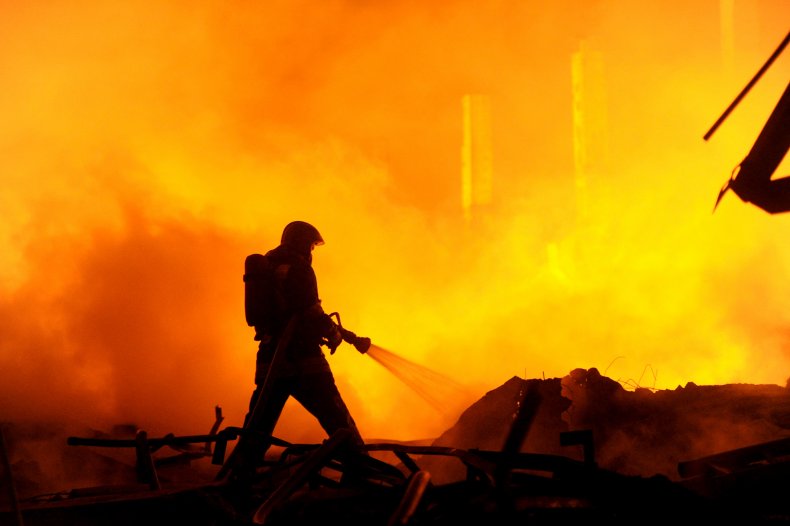 A firefighter works to extinguish a fire at a warehouse of car spare parts in St. Petersburg on October 17, 2015. A car explosion in Moscow on August 20, 2022, reportedly took the life of Daria Dugin, the daughter of a Putin "propagandist."Photo by OLGA MALTSEVA/AFP via Getty Images

Ukrainian media outlet Pravda said that Aleksandr Dugin has been a driving force of Russian propaganda since the Crimean invasion in 2014 and one of the architects of the 2022 invasion of Ukraine.

"Dugin is on the U.S. sanctions list against persons guilty of aggression against Ukraine. Dugin is the founder of the ideological movement "Neo-Eurasianism" and his political activity is aimed at creating a Eurasian superpower through the integration of Russia with the former Soviet republics into the new Eurasian Union," Pravda reported. "Dugin is considered an ideologue of "racism," called for the murder of Ukrainians. The international press calls Dugin "Putin's Rasputin" or "Putin's brain," who helped shape Putin's view of Russia. Dugin was also the editor-in-chief of the propaganda Russian TV channel Tsargrad TV."

Aleksandr Dugin in late April said that any country providing weapons to aid Ukraine in the fight against Russia should be prepared for Russia to, in turn, supply weapons to any of their aggressors.

"If the United States and European countries are calmly supplying weapons to Ukraine, why shouldn't Russia also supply various weapons systems to its partners and proxies," Dugin wrote at the time.

That meant Russia supplying any weaponry to Cuba, Venezuela or any other country within striking distance to the U.S.

The Russia-Ukraine war is entering its half-year mark this week, with Wednesday being the midpoint.

Russia began building troops along Ukraine's northern and western borders in late January, and they began attacking Ukraine on February 24, 2022. Since then, there have been heavy casualties on both sides. That includes Ukrainian civilians, foreign fighters, Ukrainian military and more than 44,000 Russians.

Russia failed to overtake Kyiv, Lviv and Odesa, but they occupied many regions in the eastern portion of Ukraine. Russia has occupied most of the Donbas Oblast, which includes Luhansk, Severodonetsk, Donetsk and Mariupol. They occupied the Crimea peninsula in 2014.

Russia has also occupied the major southern cities of Kherson and Melitopol, inching their way toward Odesa and the southwestern Transnistria area near the Moldova border.

Ukraine is on particularly high alert next week as it sets to celebrate its Independence Day. President Volodymyr Zelensky said Russia could do something "particularly nasty" during its celebration of freedom.

What did she do?

She died! Got blown to smitherines! She went boom. Vaporized!

Everyone close to Putin or his cronies will pay for Putin's Follies.

Why was she attacked?

What did she do?

Maybe Trump did it because she was aware of the dozens of  "clandestine Russian spies" that he had ties to.

It was likely her father who was the target, but she was also a Russian propagandist.

Dugina expressed similar views and had appeared as a commentator on the nationalist TV channel Tsargrad.

"Dasha, like her father, has always been at the forefront of confrontation with the West," Tsargrad said on Sunday, using the familiar form of her name.

The explosion took place as Dugina was returning from a cultural festival she had attended with her father.

So media are fair targets?

What am I saying? BLM/Antifa have attack countless media and have never suffered repercussions.

She didn't deserve to die. Neither does her father. Don't like what they are saying, don't listen to them or read anything they write.

Please quote where I said she deserved to die.

I provided a reason someone else might have attacked her or her father.

Russia is in a war of their own choosing, you know.  One in which they certainly have not refrained from targeting civilians.  It would hardly be surprising for one or two of their own civilians to be targeted.  One or two, moreover, who have much more blame in this war than laboring mothers or children in the maternity hospital Russia chose to bomb.

BLM/Antifa are not in Russia and not in this article. You should take your Mr. Squirrel and stick to the frickin subject.

Professor Principal
1.2  devangelical  replied to  JBB @1    one month ago

oh dear, an autocrat stuck to the headliner of a luxury vehicle. too bad.

I would suggest that the bomb was meant for her father. She was driving his car and he took another vehicle.

Assassinations are a way of life in Russia. Putin is quite good at it.

Putin is quite good at it.

Yes, I have also seen hints that he and Dugin are on the outs, and that this may have been carried out on Putin's orders.  It wouldn't be the first time somebody he disliked met an untimely end, or the first time their family was caught in the crossfire.

I would suggest that the bomb was meant for her father.

That would be the most likely scenario, but there are probably a thousand things we don't know. Putin is a cagey beast. At least it was quick and not some slow acting radiation poisoning like the KGB used on defectors in the past. Perhaps it was Putin ordered or Ukrainian agents or anti-war Russian agents? We'll likely never know for sure.

Maybe Putin is unhappy with the advice he has gotten and blames Dugin?

What comes around goes around.

Or maybe it was an inside job?