How to apply for Biden's student loan forgiveness - The Washington Post

The White House said Friday that student loan borrowers will be able to apply for debt cancellation this fall and receive relief within four to six weeks.

Speaking to reporters, White House National Economic Council deputy director Bharat Ramamurti said the Education Department will release the application for President Biden's loan forgiveness program in early October. After making successful applications, borrowers should expect to have their loan balances reduced or in some cases fully erased in a month or so.

The announcement arrives days after Biden said he would cancel up to $10,000 in federal student loan debt for borrowers who earn less than $125,000 per year, or less than $250,000 for married couples. Those who received Pell Grants, federal aid for lower-income students, could see up to $20,000 in forgiveness.

In the wake of the news, borrowers have been clamoring for more information, peppering student loan servicers with questions and crashing the Education Department's website. Details of the plan continue to emerge from the Biden administration, giving borrowers a clearer understanding of how relief will work.

Once the application is out, Ramamurti said borrowers should apply by Nov. 15 to have their balances lowered or eliminated before the student loan payment pause ends on Dec. 31. The Education Department, he said, will process applications on an ongoing basis even after payments resume.

Roughly 8 million borrowers, whose income is already on file at the department, will have their loans automatically forgiven without having to apply. Everyone else can sign up onStudentaid.gov tobe notified when the form goes live.

The White House estimates that nearly 90 percent of relief will go to people earning less than $75,000 and that roughly 20 million borrowers could have their debt completely canceled.

In all, about 43 million people could see some level of forgiveness, officials said.

Calculate how much of your student loan debt can be forgiven

"This plan will lift a large weight from tens of millions of Americans, people who came, by and large, from working families and who are working class now," Ramamurti said. "By lifting this weight, we are not only benefiting them and their families, we are benefiting the communities that they live in and the economy as a whole."

Opponents of the plan continue to assail its fairness and the potential costs. On Friday, Ramamurti provided the first official cost estimate for the program. He said it would reduce average annual revenue in the student loan program by $24 billion a year over the next decade. That would effectively cut in half the amount of money the White House estimates it will collect once student loan payments resume in January.

"Because we are providing debt relief, reducing the outstanding balance for some people, eliminating it for other people, that means we're not going to be collecting a certain amount of payments that we would have," Ramamurti said. "That represents 1.5 percent of the deficit reduction that we are projecting for this fiscal year before the announcement. And it is far less than the $350 billion-plus that we've already done in PPP loan forgiveness since last July." 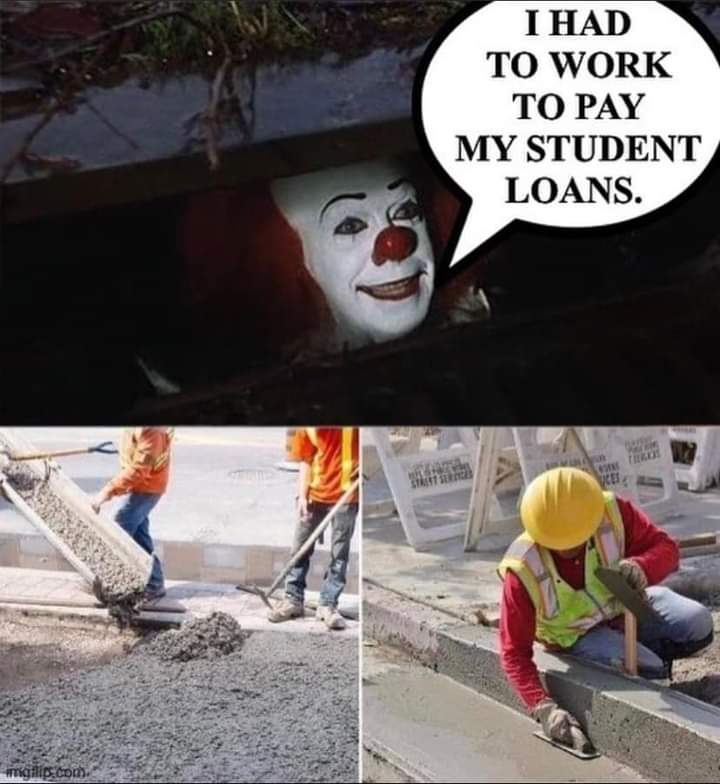 As opposed to "I went to college to get a good education so that I could make a decent living, but now I don't want to pay my legal debts"? 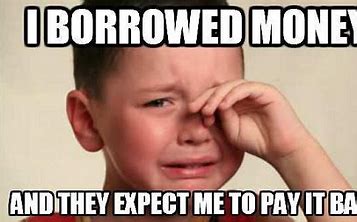 When I said that yesterday, never did I really believe some asshat would actually laugh at those who work to pay the loans of the privileged/lucky.

Seems like college established a sense of entitlement and holier than thou in some folks.

An amazing coincidence there's an election in that frame!

A  coincidence that will cost taxpayers up to a trillion dollars. .

An amazing coincidence there's an election in that frame!

Sure. JUST a coincidence that the midterms are fast approaching and Democrats are worried about them.

Blatant attempt at vote-buying is all this is.

Professor Principal
3  Sparty On    one month ago

Pigs get fed, hogs get slaughtered

Professor Expert
4  Tacos!    one month ago

I put my own money into my education. Where do I apply for my refund - with interest?

Good luck collecting but in case hell actually freezes over, let me know so I can collect as well.

We deserve it just as much as those who Biden was so generous to.

Freshman Guide
5  Revillug    one month ago

First, go to college. Second, choose a school you can't afford. Third, major in something that you are passionate about but have no real talent for. Four, whine about your student debt on Twitter for twenty years until Elizabeth Warren picks it up as pet project. Five, copy what AOC does.

Freshman Principal
6  Drinker of the Wry    one month ago

In my civics class many years ago, I was taught that only Congress has the power of the purse.  The executive branch cannot spend money that has not been appropriated by Congress, guess my teacher was wrong.

Professor Principal
6.1  Sparty On  replied to  Drinker of the Wry @6    one month ago

Civics is not taught in school anymore, at least not the Civics we learned.

This seed has value to some people.

They paid dearly for a tuition.