The Justice Department laid out a detailed timeline of events and revealed a photo of some documents recovered at Mar-a-Lago.

FBI agents searched Trump’s tennis and social club in Palm Beach on Aug. 8 and took away boxes of material, including 11 packets of classified documents. Among that set was a batch labeled with the highest classification markings, meant for review only in secure government facilities. 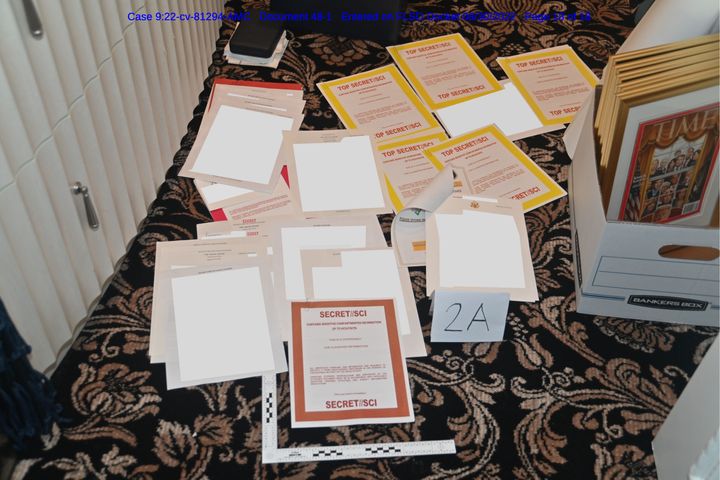 Prosecutors told a federal judge late Tuesday that former President Donald Trump and his team repeatedly failed to hand over classified documents, and that efforts to keep them at his Mar-a-Lago home constituted obstruction of its criminal investigation.

Prosecutors went into a detailed chronology of the archivists' — and, subsequently, FBI investigators' — efforts to get the documents back, which led to a grand jury subpoena demanding them. At a June meeting with Department of Justice officials, a Trump representative certified in writing that all the responsive documents were contained in a single sealed envelope that was handed over.

The 36-page brief, filed by the department's head of counterintelligence Jay Bratt and the U.S. Attorney for South Florida Juan Gonazalez, stated that Trump's people showed officials the storage room where they claimed the remaining documents were kept, but refused to let prosecutors see them.

"The former president's counsel explicitly prohibited government personnel from opening or looking inside any of the boxes that remained in the storage room, giving no opportunity for the government to confirm that no documents with classification markings remained," Bratt and Gonzalez wrote.

When officials reviewed the envelope, they found 38 different classified documents, including some marked "top secret" that contained the most sensitive type of information.

"Counsel for the former president offered no explanation as to why boxes of government records, including 38 documents with classification markings, remained at the premises nearly five months after the production of the fifteen boxes and nearly one-and-a-half years after the end of the administration," the filing stated.

Further FBI investigation, they added, found that classified documents remained at Mar-a-Lago even after the search, suggesting that Trump's people were obstructing the grand jury subpoena and the ongoing investigation.

That information led to the search warrant and, three days later, the Aug. 8 raid, which resulted in the seizure of 33 "items of evidence," mainly boxes, which contained "over 100 classified records, including information classified at the highest levels," the filing stated. Some of the material was not in boxes at all, but in desks located in Trump's office.

"Thirteen boxes or containers contained documents with classification markings, and in all, over one hundred unique documents with classification markings — that is, more than twice the amount produced on June 3, 2022, in response to the grand jury subpoena — were seized. Certain of the documents had colored cover sheets indicating their classification status," Bratt and Gonzalez wrote. "Notwithstanding counsel's representation on June 3, 2022, that materials from the White House were only located in the storage room, classified documents were found in both the storage room and in the former president's office. Moreover, the search cast serious doubt on the claim in the certification (and now in the Motion) that there had been 'a diligent search' for records responsive to the grand jury subpoena."

Prosecutors also explained in a footnote that Trump's passports were returned to him, even though they could have been retained as evidence.

"The government seized the contents of a desk drawer that contained classified documents and governmental records commingled with other documents. The other documents included two official passports, one of which was expired, and one personal passport, which was expired. The location of the passports is relevant evidence in an investigation of unauthorized retention and mishandling of national defense information; nonetheless, the government decided to return those passports in its discretion," Bratt and Gonzalez wrote.

Trump's staff did not immediately respond to a HuffPost request for comment early Wednesday. However, Trump himself has been posting and sharing a near-constant stream of wild comments on his Twitter-like social media platform, including one demand that he be reinstated to the presidency at once.

Tuesday's filing was in response to Trump's attempt to get U.S. District Court Judge Aileen Cannon to appoint a "special master" to review documents taken from the Palm Beach, Florida tennis and croquet social club to see if they should not be released because of "executive privilege."

Prosecutors argued that Trump had no business asking for any of those documents back because they're not his.

"The former President lacks standing to seek judicial relief or oversight as to Presidential records because those records do not belong to him," Bratt and Gonzalez wrote.

Prosecutors said that Cannon lacks the jurisdiction to that, but that even if she did, doing so would hurt the investigation and jeopardize the nation.

"Appointment of a special master is unnecessary and would significantly harm important governmental interests, including national security interests," Bratt and Gonzalez wrote. "Appointment of a special master would impede the government's ongoing criminal investigation and — if the special master were tasked with reviewing classified documents — would impede the Intelligence Community from conducting its ongoing review of the national security risk that improper storage of these highly sensitive materials may have caused and from identifying measures to rectify or mitigate any damage that improper storage caused."

They added that Trump's claims of "executive privilege" had no merit because, in this case, it is the executive branch ― both the National Archives and the Department of Justice ― that is seeking the classified documents.

An FBI agent's redacted affidavit released last week showed that investigators are looking at whether Trump violated a number of federal laws dealing with official and classified records.

FBI agents searched Trump's tennis and social club in Palm Beach on Aug. 8 and took away boxes of material, including 11 packets of classified documents. Among that set was a batch labeled with the highest classification markings, meant for review only in secure government facilities.

Trump, who had already been attacking the FBI and prosecutors for investigating his actions on and leading up to his Jan. 6, 2021, coup attempt, has ramped up criticism of law enforcement since then.

His followers have responded by threatening FBI agents and the Department of Justice, and one Trump supporter was already killed in a shootout with police after he tried to attack the FBI field office in Cincinnati.

In addition to the federal criminal investigations, a Georgia prosecutor is separately investigating Trump and his allies' attempts to coerce state officials into falsely declaring him the winner in that state.

Trump, despite losing the election by 7 million votes nationally and 306-232 in the Electoral College, became the first president in more than two centuries of elections to refuse to hand over power peacefully. His incitement of the Jan. 6 assault on the Capitol — his last-ditch attempt to remain in office ― killed five, including one police officer, injured another 140 officers and led to four police suicides.

Nevertheless, Trump remains the dominant figure in the Republican Party and is openly speaking about running for the presidency again in 2024.

In statements on his personal social media platform, Trump has continued to lie about the election and the Jan. 6 committee's work, calling it a "hoax" similar to previous investigations into his 2016 campaign's acceptance of Russian assistance and his attempted extortion of Ukraine into helping his 2020 campaign.