The search inventory released showed that classified documents had been mixed in with personal items and other materials in the boxes in which they were stored.Federal investigators also retrieved more than 11,000 non-classified government documents.

US District Judge Aileen Cannon on Friday released a detailed inventory from the Mar-a-Lago search that the Justice Department previously filed under seal in court.

The search inventory released showed that classified documents had been mixed in with personal items and other materials in the boxes in which they were stored.

Several other boxes detailed in the inventory contained documents marked as classified stored with press clippings, as well as with articles of clothing and gifts.

In addition, federal investigators collected more than 48 empty folders with a "classified banner" and 42 empty folders marked to return to the staff secretary or military aide.

The judge also released a status report the department filed under seal about its investigative team's review of the evidence so far.

Cannon at a hearing on Thursday indicated she intended to release the documents. She did so after giving both the prosecutors and former President Donald Trump's lawyers the opportunity to lodge any objections to the documents' release. They did not.

Prosecutors wrote in the investigative team status report that was unsealed that "all evidence pertaining to the seized items - including, but not limited to, the nature and manner in which they were stored, as well as any evidence with respect to particular documents or items of interest - will inform the government's investigation."

"The investigative team has reviewed the seized materials in furtherance of its ongoing investigation, evaluating the relevance and character of each item seized, and making preliminary determinations about investigative avenues suggested or warranted by the character and nature of the seized items," the status report said.

This story is breaking and will be updated.

It's a circus. Amend that. It is a fucking freak show!

It's a circus. Amend that. It is a fucking freak show!

More like Show And Tell with our national secret!

More like Show And Tell with our national secret!

It's the "Show" of trying to "Show" that's what they "Say" is happening.

"...classified documents had been mixed in with personal items and other materials..."

A real picture from Trump's office at Mar-A-Lardo... 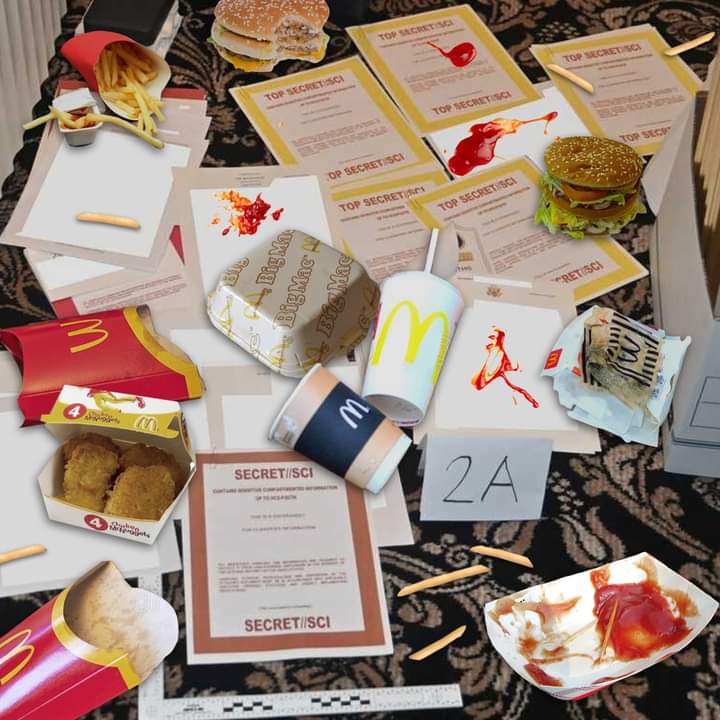