Russian Soldiers Riot, Refuse To Fight Over Lack of Supplies—Kyiv

A U.S. think tank has said it is likely that Russian forces are reinforcing frontline positions with inexperienced and forcibly mobilized elements that lack the will to fight.

A Russian military unit deployed in Ukraine's south has refused to fight over a lack of vital supplies such as water, Ukraine said Sunday.

Ukraine's Operational Command South reported in a Facebook post that soldiers with the 127th Regiment of the 1st Army Corps rioted, and refused to further participate in Russian President Vladimir Putin's war against Ukraine.

According to the command, the soldiers lacked support, while personnel in advanced positions didn't have water.

The servicemen were reportedly removed from their unit as punishment. 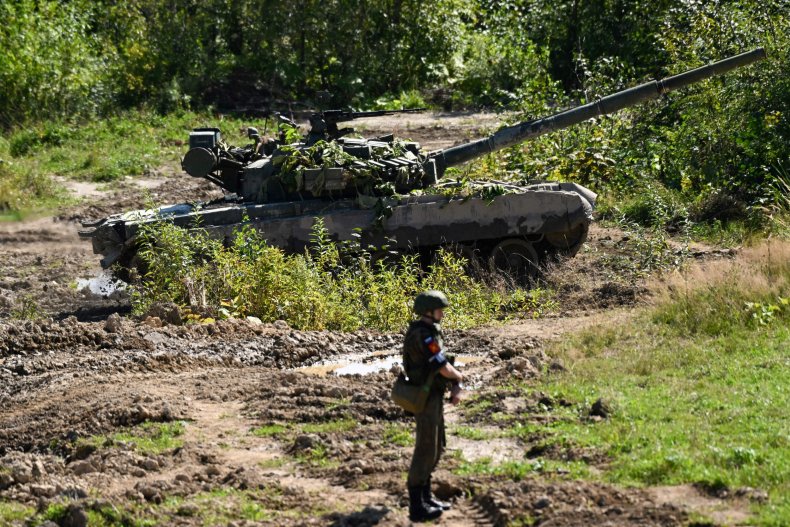 A serviceman looks on as a tank passes while taking part in military exercises at the Uspenovskyi training ground outside the city of Yuzhno-Sakhalinsk in the Russian Far East on September 4, 2022. A Russian military unit deployed in Ukraine has refused to fight over a lack of vital supplies such as water, Kyiv said. KIRILL KUDRYAVTSEV/AFP/Getty Images

Newsweek has been unable to independently verify the claims, but has reached out to Russia's foreign ministry for comment.

The Institute for the Study of War (ISW), a U.S. think tank, noted that Russian forces formed the 127th Regiment of forcibly mobilized personnel in Donetsk and Luhansk Oblast in early April, alongside four other DNR regiments: the 103rd, 109th, 113th, and 125th.

ISW previously reported that the DNR redeployed the 109th, 113th, and 125th regiments to northwestern Kherson in late July, and the 109th regiment reportedly surrendered on the first day of the Ukrainian counteroffensive.

The think tank assessed it is likely that Russian forces are reinforcing their front-line positions with inexperienced and forcefully mobilized elements that lack the will to fight.

It would not be the first time Russian soldiers have been accused of refusing to take up arms Ukraine.

Rinchino said the men entered into short-term contracts with Russia's defense ministry and were locked up after they refused to continue to participate in the war and attempted to terminate their contracts.

Relatives of the soldiers told the news outlet that the men also received death threats for refusing to fight.

Some were also reportedly threatened with being deployed to "combat assault squadrons" for asking to return home. Such squadrons are typically created to lead an attack and are expected to sustain heavy casualties in operations.

The latest developments come more than six months into the conflict, and as Ukraine is waging a counteroffensive in the currently occupied Kherson region, targeting key bridges that have been used by Russian troops as supply routes.

Ukrainian President Volodymyr Zelensky said in a video address Sunday night that as part of the counteroffensive a settlement in the Donetsk region had been liberated along with two more in the south of the country.

He did not specify which settlements had been recaptured by Ukrainian forces.

This is likely to spread. Putin wasted his best troops and equipment for nothing. Soon more of the conscripted reserves will rebel. I give him 6 more months at most

Morning...wait till the Winter arrives!!...