This "mass desertion" is occurring among a group of Russian troops in a Russian-backed region of Moldova, according to Ukrainian military intelligence.

A group of Russian troops in a Russian-backed region of Moldova is experiencing "mass desertion" during a push to recruit contract workers in the area, according to Ukrainian military intelligence.

The Main Intelligence Directorate of Ukraine's Defense Ministry wrote in a new report Thursday that residents of Transnistria are refusing to sign contracts with the Russian army despite promises of "high cash payments, social packages, and likely housing." The report also said that there had been an increase in the number of desertion cases among what it described as the "operational group of Russian troops in Transnistria."

"And due to the limited number of military contingents, the Russians cannot attract the necessary resources to search for and return the missing," it added.

It was not immediately clear how the Ukrainian agency was able to obtain the information. Newsweek was not able to verify the report and reached out to Russia's Defense Ministry for confirmation and comment. 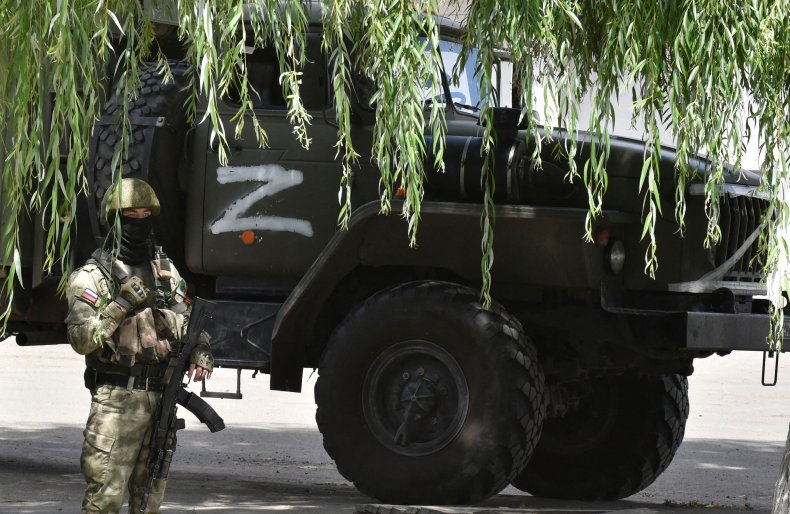 A Russian serviceman guards a grain elevator in Melitopol, Zaporizhzhia region, on July 14, 2022, amid the ongoing Russia-Ukraine war. A group of Russian troops in a Russian-backed region of Moldova is experiencing "mass desertion" during a push to recruit contract workers in the area, according to Ukrainian military intelligence. Olga Maltseva/AFP via Getty Images

If true, the Ukrainian intelligence is one of the newest indications that Russia has been struggling with its troops amid the war in Ukraine. In its Sunday intelligence update, the U.K. Defense Ministry wrote that Russian forces were suffering from "morale and discipline issues" in Ukraine, with issues like combat fatigue, high casualties and payment problems being among the main grievances.

In late August, an unnamed U.S. official told the Associated Press on condition of anonymity that Russia was facing "severe manpower shortages" and was looking to address the deficits by asking previously wounded soldiers to return to the Ukraine conflict, as well as recruiting from private security companies and prisons.

While Russian President Vladimir Putin or other officials have not publicly admitted facing manpower shortages, the longtime Russian president did order his military last month to add 137,000 troops to bring its total to 1.15 million.

Transnistria is a breakaway territory in Moldova that has hosted Russian soldiers for decades, CNN reported. For the recruitment push, the "main reason" that locals will not agree to join the Russian army is their aversion to taking part in the conflict in Ukraine, according to the Ukrainian report.

"Currently, the 'operational group' has intensified the training of personnel," the report said. "Taking into account the experience of hostilities in Ukraine, significant adjustments were made to the training program. In particular, the number of classes with units of rear support and military medical aid has been increased."

It added that the "outdated rear material and technical base does not allow to qualitatively improve the level of readiness of logistics units."

A mess that he can't get out of.