The two sides had sharply diverging views of who could serve as a special master and what that person would do.

The two sides had sharply diverging views of who could serve as a special master and what that person would do. 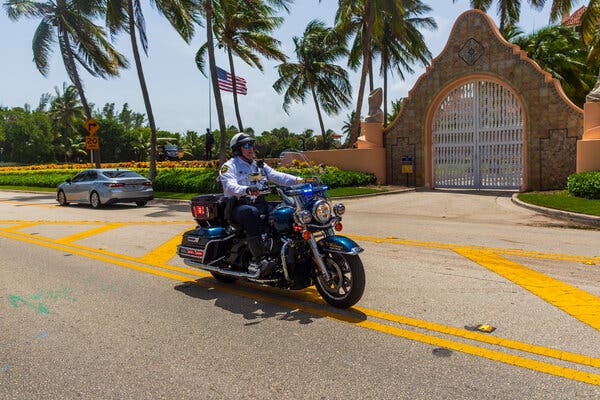 WASHINGTON — The Justice Department and lawyers for former President Donald J. Trump failed to agree on Friday on who could serve as an independent arbiter to sift through documents the F.B.I. seized from Mr. Trump's Florida club and residence last month.

In an eight-page joint filing that listed far more points of disagreement than of consensus, the two sides exhibited sharply divergent visions for what the arbiter, known as a special master, would do, and put forth different candidates.

The Justice Department proposed two former Federal District Court judges for the position: Barbara S. Jones, a Clinton appointee to the Southern District of New York who performed a similar role in cases involving two personal lawyers of Mr. Trump, Michael S. Cohen in 2017 and Rudolph W. Giuliani in 2021; and Thomas B. Griffith, a George W. Bush appointee who retired from the bench in the District of Columbia in 2020.

Mr. Trump's legal team countered with two suggestions of its own: a retired Federal District Court judge, Raymond J. Dearie, a Reagan appointee who sat in the Eastern District of New York and once served as the top federal prosecutor there; and Paul Huck Jr., a former deputy attorney general in Florida who also served as general counsel to Charlie Crist, who was its Republican governor at the time.

Mr. Huck is married to Judge Barbara Lagoa, whom Mr. Trump appointed to the Court of Appeals for the 11th Circuit in Atlanta, which oversees federal courts in Florida. Such an appointment would appear to create a conflict of interest that could require Judge Lagoa to recuse herself from litigation involving the case.

Judge Aileen M. Cannon, who ordered the parties to produce a list of qualified candidates by midnight Friday, will ultimately decide who will be tapped for the job. She will also set the parameters of the review.

The Justice Department, seeking to quickly finish its investigation into Mr. Trump's handling of sensitive government documents, proposed setting a deadline of Oct. 17 for completion of the arbiter's work; Mr. Trump's team suggested taking 90 days — or about three times as long.

The department also said Mr. Trump should pay for the master since he had asked for it; Mr. Trump's team proposed that taxpayers split the cost.

The two sides also clashed substantially over the duties of the special master. Mr. Trump's lawyers argued that the arbiter should look at all the documents seized in the search and filter out anything potentially subject to attorney-client or executive privilege.

More on the Trump Documents Inquiry

By contrast, the government argued that the master should look only at unclassified documents and should not adjudicate whether anything was subject to executive privilege.

Mr. Trump's lawyers are also asking the court to exclude National Archives officials from the process of reviewing the materials; the department believes their involvement is essential.

The dispute over the special master's purview was reflected in an appeal the Justice Department filed on Thursday seeking to lift part of Judge Cannon's order temporarily barring it from using the documents in its investigation.

The department asked an appeals court to overturn the portion of that order that applied to about 100 documents marked as classified, and asked Judge Cannon to hold off on enforcing that part as the appeal unfolded.If she did, the investigation could resume using only those documents.

Judge Cannon has not yet decided whether to comply with the government's request, which the Justice Department argued was necessary for separate national security assessments to continue.

The Office of the Director of National Intelligence, which is conducting those national security reviews, said Friday that both, a classification review and an assessment of the potential risks to national security caused by the insecure storage of documents at Mar-a-Lago, Mr. Trump's residence in Palm Beach, Fla., had been "temporarily paused" after consultation with the Justice Department.

While Mr. Trump and his allies have repeatedly claimed that the former president had a standing order to declassify all materials he took from the White House, his lawyers have not made that assertion in court. In fact, they have said that any special master in the case would need a high-level security clearance.

But Mr. Trump's lawyers have gestured toward his claim of declassification by declining to concede that the documents were classified. They did so again in the filing on Friday night, writing that the Justice Department had wrongly assumed "that if a document has a classification marking, it remains classified in perpetuity."

The dispute over the special master was the latest twist in the criminal investigation into Mr. Trump's hoarding of government documents — including some marked as highly classified — and his refusal to return them despite repeated entreaties by the National Archives and a subpoena from a grand jury.

The matter traces back to Mr. Trump's chaotic exit from office in January 2021, when boxes of materials from the residential part of the White House were taken to Mar-a-Lago. They contained thousands of government records — some marked as classified, some not — apparently mixed in with news clippings, articles of clothing, gifts and other items.

By May 2021, the National Archives realized that Mr. Trump had taken numerous government files with him and began asking for their return. In January, after months of delay, Mr. Trump returned 15 boxes. When the agency discovered sensitive documents mixed in, it referred the matter to the Justice Department.

In May, the department obtained a grand jury subpoena requiring Mr. Trump to return any other documents marked as classified in his possession. The next month, two of his lawyers turned over a small number of such files and told the government that there had been a "diligent search" and no others remained.

But investigators acquired evidence that Mr. Trump was still holding onto more government property, including files with classification markings, leading to the search last month.

Materials related to the search show the Justice Department is investigating crimes that include unauthorized retention of national security secrets and obstruction.

The DOJ is trying to turn the Special Master into another government lackey; one with very limited power.

No surprises at all from the most partisan AG ever.

He has to protect himself and the Democrat lackeys in the DOJ and FBI at all costs.

The ruling surprised experts and could slow the investigation.

Didn’t surprise me, although, I’m no “expert.” I’m curious who the experts are. Who are the experts in cases involving DOJ investigations and prosecutions of former presidents accused of making off with classified documents? Why would there even be an “expert” on that kind of thing?

I’m not surprised because judge shopping is a thing and it shouldn’t be too difficult to find a judge willing to at least give the accused the benefit of the doubt (Constitutionally, he should get that benefit), and a special master doesn’t actually hurt the investigation. It just slows it down.

Does it help if the judge is appointed by Trump? Mayyyyybe. Maybe not, though. Like I said, it won’t change much. It’s not as if the Special Master is likely to decide that everything the FBI took from Mar-a-lago is Trump’s private property, and thus kill the investigation.

The case in inherently political and there’s nothing wrong with having an independent arbiter examine the evidence seized. If anything, it will lend greater credibility to any prosecution that follows.

It’s a solid delay tactic, but I doubt it will achieve much more than that for Trump. If you’re Trump’s lawyer, though, it’s sort of your job to make this as difficult as possible for investigators.