Republican Rep. Louie Gohmert of Texas presented an honorary American flag recently flown above the US Capitol to a convicted January 6 rioter after she was released from prison Friday.

(CNN)Republican Rep. Louie Gohmert of Texas presented an honorary American flag recently flown above the US Capitol to a convicted January 6 rioter after she was released from prison Friday.

Gohmert, a Trump ally who has previously promoted debunked conspiracies about the January 6, 2021, insurrection, met Dr. Simone Gold upon her release from federal prison in Miami on Friday and gifted her a flag flown over the Capitol along with an official certificate. In a statement released Friday, Gohmert falsely claimed that Gold was "a political prisoner," a term many supporters of former President Donald Trump have used to inaccurately describe the prosecution and incarceration of January 6 defendants. Republicans' Jan. 6 counterprogramming filled with falsehoods "Dr. Gold is the definition of what a political prisoner looks like -- something I never thought I'd see here in the United States of America," Gohmert said. Gold is a well-known Covid-19 conspiracy theorist who was sentenced to 60 days in prison in June for her involvement in the January 6 riot. She is the founder of America's Frontline Doctors, a group that received national attention for spreading false claims about Covid-19, pushing unproven treatments like hydroxychloroquine and later lying about the FDA-authorized vaccines. The day before January 6, Gold spoke at a "Stop the Steal" rally in Washington, DC, where she further promoted vaccine misinformation. The next day, she joined a group of rioters who forced their way past officers and breached the US Capitol. She later spoke through a megaphone to fellow rioters gathered in Statuary Hall. Read More At her sentencing hearing in June, US District Judge Christopher Cooper chastised Gold for "leaving people with the misimpression that this is a political prosecution." Cooper gave her the 60-day jail sentence after she pleaded guilty to entering restricted Capitol grounds, a low-level misdemeanor with a maximum potential sentence of one year behind bars. The statement released by Gohmert's office Friday said he presented Gold with the flag "to celebrate her invaluable work and contributions to public health, medical freedom and our God-given constitutional rights." The certificate presented with the flag said it was given "in honor of the beginning of the rest of (Gold's) invaluable life ... with great appreciation, admiration and awe," according to photos of the flag presentation released on Gold's Twitter account. Gohmert, who is leaving Congress when his term ends next year following an unsuccessful run for Texas attorney general, is one of the most vocal promoters of January 6 conspiracies. He is also part of a group of House Republicans that have rallied to the defense of some of the people charged in connection with the insurrection. "I am honored to receive this recognition from Congressman Gohmert, a true believer in freedom and a fierce defender of our constitutional rights," Gold said via Twitter.

The Architect of the Capitol, the office responsible for maintaining the grounds of the US Capitol, provides official flags flown over the Capitol to members of Congress upon request. The office "fulfills on average more than 100,000 flag requests" from lawmakers annually, according to its website. Gold is one of more than 125 Capitol rioters who have been sentenced to jail or prison after being convicted of crimes related to January 6. Nearly 875 people from across the country have been charged by the Justice Department.

crown jewel of the maga brain trust in congress.

Cooper gave her the 60-day jail sentence after she pleaded guilty to entering restricted Capitol grounds, a low-level misdemeanor with a maximum potential sentence of one year behind bars.

I think 60 days is reasonable for a low level misdemeanor. Many rioters in 2020 didn't even get that. On the other hand, I fail to see what her positions on Covid have to do with anything especially after the CDC Director publicly admitted to the agency's missteps during the pandemic.

I think 60 days is reasonable for a low level misdemeanor.

me too, she'll be more easily accessible on the outside.

And yet thousands of wounded vets, those who actually volunteered and sacrificed for this country, don't get shit from him. As usual.

Or other politicians for that matter.

Virtue signaling is what all politicians do.

Great, she can wipe her ass with it after shitting in the halls of Congress.

It's what the insurrectionist assholes did, but you knew that.

Yes, the first thing most liberals think of,

nah, they probably think my,. just how freakin stupid can the GOP BE ???

What does our flag stand for? The stripes represent the original 13 Colonies and the stars represent the 50 states of the Union. The colors of the flag are symbolic as well; red symbolizes hardiness and valor, white symbolizes purity and innocence, and blue represents vigilance, perseverance and justice.

So a convicted rioter science denier and deviant douche guilty of desecrating our Capitol and spreading LIES as the peoples did up and DIES due to False info spread is awarded our Symbol of "purity and innocence".... Repubs sure are DENSE !

It's what the insurrectionist assholes did, but you knew that.

I'm sure you have proof of this, correct. 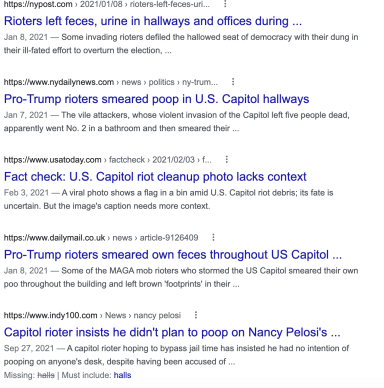 It's not difficult to find. These are all coherent to those that have reasonably good reading comprehension.

Google "insurrectionists shit in the halls of Congress" . This is just the first five hits, there are pages and pages of articles from sources left, right and in between.

My comment clearly covered the accusation that most leftists use the American flag to wipe their assess with.

You failed to provide any proof of that.

BTW...I would rather mop up a little shit and piss than have to rebuild my business after leftists burned and looted it in the summer riots of 2020.

me:  It's what the insurrectionist assholes did, but you knew that.

I'm sure you have proof of this, correct.

Tell me again what proof you wanted...I gave you plenty.

I gave you plenty

Of something well known.

I asked you for proof of your accusation that that broke into the Capitol use the American flag to wipe their assess with.

Google any Democrat run shit hole like San Fran; NY, LA, Chicago, etc and you will get much worse. Throw in used drug needs, and trash.

Not since Rush received the medal of freedom have I been this disgusted.