Oz has launched an "Inmates for Fetterman" initiative that focuses on the Republican's criticism of his opponent's views on crime.

Oz, a celebrity heart surgeon endorsed by former President Donald Trump, has strongly criticized Fetterman for his stance on crime and in particular the fact he wants to end mandatory life sentences for second-degree murder.

Images of people portraying convicted felons and holding signs saying "Inmates for Fetterman" were shared to Twitter on Tuesday morning by PatriotTakes, a Twitter account that describes itself as "dedicated researchers monitoring and exposing right-wing extremism and other threats to democracy."

The individuals are shown wearing orange jumpsuits and one can be seen holding a sign that says: "Another convicted felon for Fetterman." 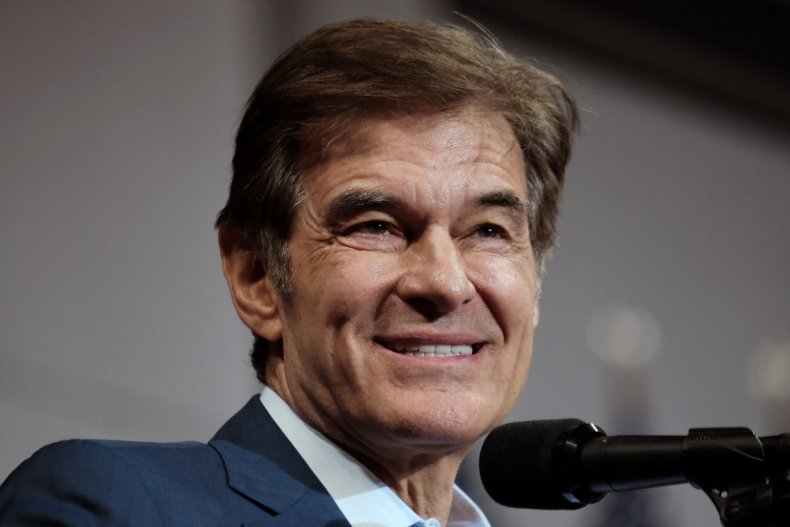 One of the people depicted is Colin Matthews, who originally shared the photos of himself with Oz, as well as with others dressed in the jumpsuits, to his Instagram page. He also discussed dressing as a convicted felon.

The photos shows Oz autographing one of the signs in question with Matthews standing next to him.

"Last night might've been the greatest things I've ever done in politics yet. I was hired by the Oz campaign to play the role of a felon supporting Fetterman… I can't believe how many idiots thought I was legit out of jail," Matthews wrote.

The photos were shared to Twitter on Tuesday but the Oz campaign announced its "Inmates for Fetterman" initiative on September 2 and has set up a dedicated website on the issue.

Oz's communications director Brittany Yanick previously shared a tweet from journalist Justin Sweitzer about the Inmates for Fetterman initiative. That tweet featured the campaign's press release and a photo that included Matthews and others in orange jumpsuits.

Oz has taken aim at Fetterman over his stance on convicted felons with the Republican accusing Fetterman of wanting to "eliminate life sentences for murderers."

However, Fact Check.org has found that claim to be inaccurate. In fact, Fetterman is opposed to mandatory life sentences for those convicted of second-degree murder.

The Oz campaign also recently said that two members of Fetterman's campaign staff were convicted murderers and should be fired.

"If John Fetterman cared about Pennsylvania's crime problem, he'd prove it by firing the convicted murderers he employs on his campaign," Yanick said in a statement on Thursday.

Fetterman's campaign responded by saying the accusation was a "gross smear" and the campaign workers, Dennis Horton and Lee Horton, were wrongly convicted and spent 30 years in prison before their sentences were commuted in 2021.

His campaign said that Fetterman "led the charge for the Board of Pardons to commute their sentences to time served."

Fetterman has been in front of Oz in a slew of recent polls in a race that could decide control of the Senate and poll tracker FiveThirtyEight currently rates the Democrat as favorite to win.

Newsweek has asked the Oz and Fetterman campaigns for comment.

Is everybody in the gop a goddamn lying troll now?

Is everybody in the gop a goddamn lying troll now?

Did Fetterman pay Nicole “Snooki” Polizzi for her political assessment?

You leave us no options except to take that as a BIG YES!

Imagine that, paid a Reality TV actor to troll the campaign.

Who is Snooki? What is a Snooki? Why should anyone care?

Apparently the Fetterman campaigned cared.  Maybe Fetterman's base like Snooki.

Nobody believes Fetterman is a softy on crime after he took a shotgun to a Black jogger.

It would have been more authentic if they had hired real inmates but PA law and/or prison regulations may not allow for that.

Oz would be more authentic if he was running in New Jersey.

Oz would be more authentic if he was running in New Jersey.

I don't disagree, I don't know why he wants to run at all beyond vanity maybe.  I never saw what Oprah sees in him.

Certainly, I love crudités with a light, olive oil vinaigrette dressing or lemon garlic aioli or my favorite, a Greek dip of roasted peppers, onions and whipped tangy cheese called tirokafteri.  It's especially wonderful with their cherry tomatoes, pickled peppers and other vegetables with some pia bread and a bottle or two of Moschifilero.  Especially enjoyable after a long day of graffiti admiring in Athens.

Politicians hire actors for political ads all the time....Fetterman is another soft on crime lib. 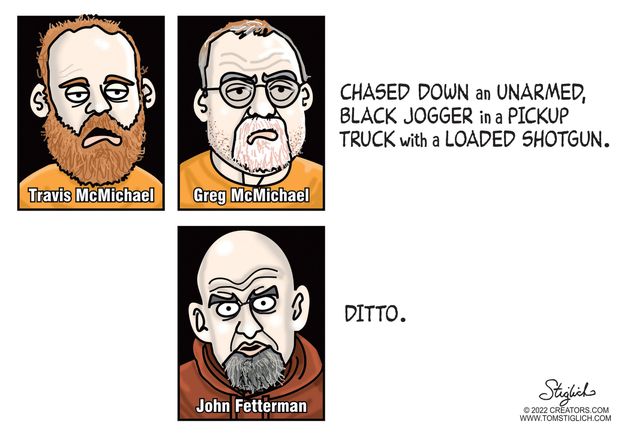 Oz is going to lose and lose, YUGE..

Lol. You are just learning politicians use actors in commercials?

I guess when you support a candidate who chases innocent black joggers with a shotgun, you have to talk about anything than your candidate.

It must  have been a tough day for the Democrats in Georgia when the murderers of  Ahmaud Arbery  were convicted and unavailable to be elected as a Senator.   You got the next best thing though!

The Good News is that Mitch McConnell will never ever be The United States Senate's Majority Leader ever again. Never! Ever...

That may be true but, he is the one responsible for the Conservative Supreme Court we currently have.