Pence has previously stated that a vice president has no authority to overrule election results under the Constitution. 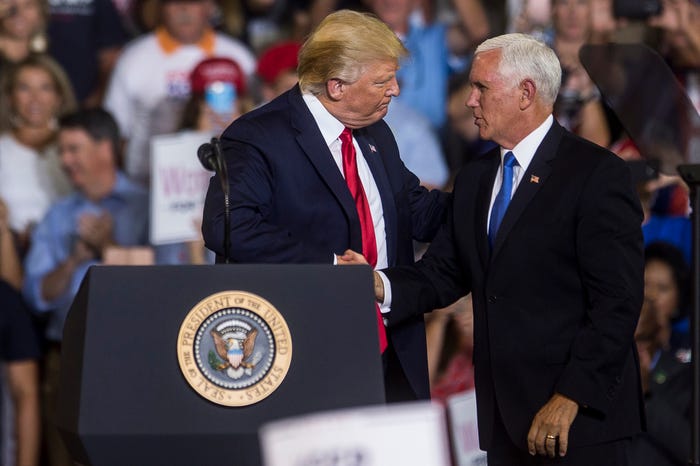 Former President Donald Trump wouldn't pick Mike Pence to be his running mate if he were to run for president again in 2024, according to an upcoming new book.

Trump has yet to announce a 2024 run but he's been teasing one since leaving the White House.

"It would be totally inappropriate" to pick Pence as his running mate, Trump said, according to a report from The Guardian, which obtained an advance copy of the upcoming book from journalists Susan Glasser and Peter Baker.

"Mike committed political suicide" when he refused to intervene in the election certification process as the former president had pressed him to do, Trump told Glasser and Baker.

Numerous reports have noted an apparent rift between Pence and Trump during the final days of his presidency, which reached its apex during the Capitol riot.

In January 2021, Pence ignored Trump's request to intervene in the process, and he later said that Trump was incorrect to say the vice president had the power to overturn the results of a presidential election.

Though the two are no longer on speaking terms, Pence's remarks drew outrage from Trump, who, in response, plainly called Pence "wrong."

"The reason they want [the law] changed is because they now say they don't want the Vice President to have the right to ensure an honest vote. In other words, I was right and everyone knows it," Trump said at the time, adding "Dems and RINOs" want to block the vice president from ensuring an "honest vote."

"A great opportunity lost, but not forever, in the meantime our Country is going to hell!" Trump said.

The Electoral Count Act spells out how Congress counts presidential electors and resolves disputes over results. Lawmakers are seeking to update the bill and clarify language that "leaves a door open for overt partisan manipulation of presidential election results at both the state and federal levels," Insider's Grace Panetta reported.

As vice president, Pence's job was to preside over the certification of the Electoral College in what is largely a ceremonial role. He did not have the power to overrule the results under the Constitution.

Since the insurrection, Pence has spoken out about his role in the Capitol riot, saying that January 6 was "difficult" to get through and calling it "a tragic day in the life of the nation."

"I know I did my duty under the Constitution of the United States," Pence said in a Fox News interview this past January. "But the president and I sat down in the days that followed that, we spoke about it, talked through it, we parted amicably."

Sign up for notifications from Insider! Stay up to date with what you want to know. Subscribe to push notifications Deal iconAn icon in the shape of a lightning bolt.

But Trump is so loyal...

Professor Principal
2  devangelical    one week ago

pence's political career is over.

2 years is a long time into the political future. every time trump gets on the news now, the republican party sheds voters. by the time the 2024 campaign season rolls around, nobody but the most delusional wack jobs will want to be on his losing ticket. if trump manages to stay out of jail, a third party run will probably be his only option and he will then split the party. the only people that will vote for him in 2024 are Q-nuts, white supremacists, and the mentally defective.

Trump won't be nominated. DeSantis has made his intentions clear

I sure hope you're right.  I was hoping that he would decide to not run again, but the longer this mid-term goes on the more I believe that Trump will run just to prove that he was right all along (which is something that his ego demands he do).

in the meantime our Country is going to hell!" Trump said.

Because of him and his jackass followers.