Historical data suggests that there is a correlation between presidential approval and congressional seat gain in the midterms.

After a troubling year in the polls, President Joe Biden's approval rating is finally on an upswing, reaching an 11-month high just seven weeks before the midterm elections. At the same time, former President Donald Trump, who had held onto a favorable rating since leaving office, is seeing one of his lowest post-presidency marks.

An NBC poll released on Sunday found that 45 percent of registered voters approved of Biden's overall job—a figure up 3 points from last month and the highest since last October. The margin of error for the 1,000 registered voters who were surveyed is 3.1 percent. The NBC News survey was conducted on September 9 to September 13.

While Biden is not up for reelection this year, historical data suggests that there is a correlation between presidential approval and congressional seat gain in the midterms.

The president's approval rating, which has finally bounced back after being underwater for an entire year, had reached new lows this year after many Americans grew increasingly concerned about inflation and the possibility of a recession. But as economic fears have subsided, Biden's favorability has risen. 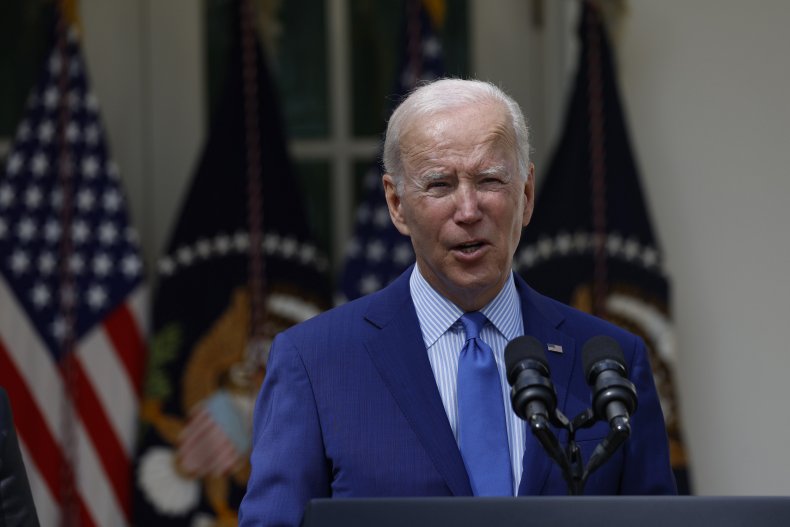 Above, President Joe Biden speaks at the White House on September 15 in Washington, D.C. Biden's approval rating has risen to its highest since last October, according to a poll released on Sunday. Meanwhile, former President Donald Trump, who had held onto a favorable rating since leaving office, is seeing one of his lowest post-presidency marks.Anna Moneymaker/Getty Images

The economy had been recurrently ranked as the key voting issue for the majority of Americans in various polls this year, but Sunday's survey found that the top issue to be "threats to democracy," with 20 percent of voters picking it as their number one issue. Comparably, 18 percent of voters picked the cost of living, 16 percent chose jobs and the economy, and another 12 percent said immigration and border security.

While Biden's rating has gone up, Trump's has fallen to one of his lowest since he left the White House last year.

Trump has been the subject of several investigations that have ramped up in recent months, including a federal probe investigating whether he mishandled presidential records after leaving office. The majority of voters, 56 percent, say they want the various probes to continue, while 41 percent say they should stop.

However, the sentiment that Trump should be investigated is largely believed by Democrats, while resisted by the bulk of Republicans. More than 90 percent of Democrats want the probes to continue, compared to 56 percent of independents and just 19 percent of Republicans.

The poll also found that voters are split on which party they think should control Congress, with 46 percent for each. Last month's poll had Republicans ahead by just 2 points.

Newsweek reached out to the White House and Trump's office for comment.