"Biden's 42 percent rating is generally in line with five of his seven predecessors' ratings [just before the midterms] in their presidencies," said a poll rep.

Joe Biden's approval rating is at the same level as Ronald Reagan's in the run-up to the Republican president's first midterm election.

A Gallup survey published Tuesday found that 42 percent of U.S. adults approve of Biden's job as president, down slightly from the 44 percent he recorded in August's poll, but up from his all-time low of 38 percent in July. 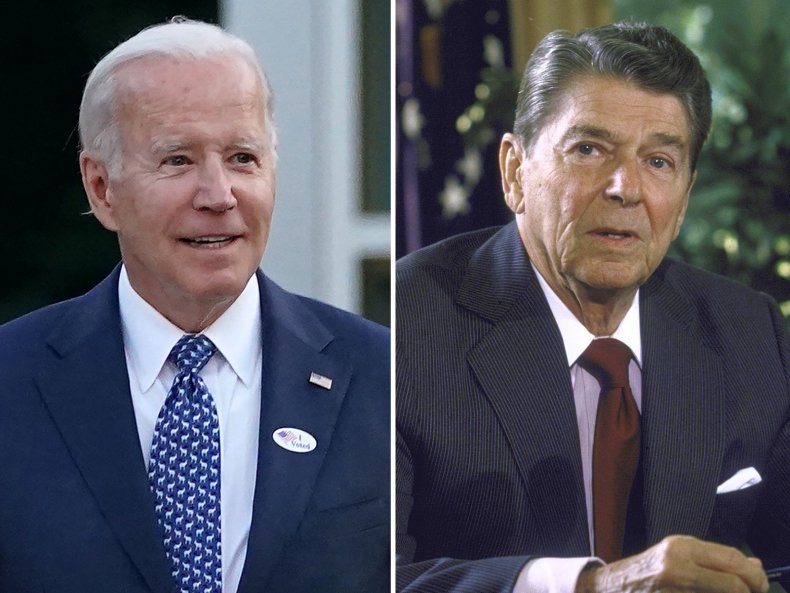 In this combination image, US President Joe Biden is pictured at a polling station at Tatnall School in Wilmington, Delaware on September 13, 2022 and a file photo shows Ronald Reagan in the Oval Office, 1985. The current White House occupant is polling at the same level as his Republican predecessor did in 1982 before victory in the midterms that year.Getty

Biden's 42 percent approval rating in the September of a midterm election year is the same as Reagan's was in 1982, as well as Bill Clinton's in 1994.

Biden is two points ahead of Donald Trump's approval rating ahead of his first midterm election, but three points behind Barack Obama's 45 percent approval rating in September 2010 and Jimmy Carter's in 1978.

The two-time president Reagan's approval rating would fall to as low as 35 percent in the months after his first midterm election, before climbing to around mid-50s in late 1983 and hitting the 60s by 1986.

Biden's rating is more or less in line with recent presidents around the same period, with two notable examples recording much-higher approval ratings.

In 1990, George Bush Sr. had an approval rating of 73 percent following the U.S. response to Iraq's invasion of Kuwait.

His son George W. Bush— whose approval ratings were as high as 90 percent in Gallup polling in the wake of the 9/11 terror attacks—recorded 67 percent in September 2002.

While Biden's approval ratings have slightly improved in recent weeks, he is still way behind the low- to mid-50s that he was enjoying in his first few months in office, with a majority of Americans continuing to disapprove of his job as president.

It remains to be seen if Biden's approval rating can continue to rise enough so the Democrats can hold onto Congress and Senate come November. Typically, the party in the White House suffers heavy losses in the midterms, with the elections seen as a referendum on the sitting president.

"Biden's current 42 percent rating is generally in line with five of his seven predecessors' ratings at the same point in their presidencies," Megan Brenan, research consultant at Gallup, said in a statement.

"In those midterm elections, the president's party lost between 15 and 63 congressional seats. The presidents whose parties suffered greater losses generally had much-larger seat majorities in the House of Representatives than Democrats do now."

At this rate Joe will finish his second term as beloved as Reagan...

At this rate Joe will finish his second term as beloved as Reagan..

I wonder what kind of odds Vegas would give you on Biden being on the 60s when he has never polled that high?

I'm pretty sure they would consider that a sucker bet and give you some pretty big odds.

Professor Principal
2  Sparty On    6 days ago

Biden is hated just as much as Reagan was.

Which implies Biden would be reelected overwhelmingly as Reagan...

Which implies Biden would be reelected overwhelmingly as Reagan.

Only to the triggered.

Reagans approval rating was near 60% when he was re-elected in 84.

We are not the triggered ones here.

Such hive minded drones some are.

You display denial and projection in the same post.

Sad, really sad but what we’ve come to expect

It depends on who the GoP nominates.   But hopefully Biden will not even run.   I do not think he will.

Also, the Biden Administration is warning of probable higher gas prices this winter.

Thank God Biden is such a whiz, eh?

Americans are a fickle bunch.

Biden's ratings have been in the tank for some time now, and his actions only are responsible for that decline.