Hobbs pitched herself as a moderate alternative to an extreme candidate who, she argued, could sow chaos if elected. The Democrat oversaw the 2020 election in Arizona and defended it against the baseless claims of malfeasance that Lake, a former TV anchor, made central to her campaign.

Shortly after the Associated Press and major networks called the race, six days after voting ended in the state, Hobbs issued a tweet declaring victory. "Democracy is worth the wait," she wrote. "Thank you, Arizona. I am so honored and so proud to be your next governor."

Lake appeared not to accept defeat, casting doubt on the results an hour later in a tweet that read, "Arizonans know BS when they see it."

On the campaign trail, Hobbs said she would protect abortion rights in Arizona, where new restrictions took effect after Roe v. Wade was overturned. She also sought to appeal to Arizona's independent and moderate Republican voters and won some support from prominent conservatives uncomfortable with the GOP's direction. A fundraiser for Hobbs featured family members of the late Republican senator John McCain, while the political action committee of Rep. Liz Cheney (R), Trump's loudest GOP critic in Congress, ran ads against Lake.

But Hobbs's race with Lake was tight to the end, as Lake fired up the GOP base and capitalized on broader factors working in her party's favor, such as high inflation and a backlash to federal border policy. When Hobbs declined to debate Lake — saying Lake wanted a "spectacle" rather than a discussion — she drew criticism from both sides of the aisle.

Much of the Republican establishment in Arizona worked against Lake in the GOP primary, backing a more traditional candidate, Karrin Taylor Robson, who did not fully embraceTrump's false election claims. And many worried Lake, a Trump loyalist, would lose a purple state known for electing moderates such as McCain — whom Lake derided. "We drove a stake through the heart of the McCain machine," she declared at the Conservative Political Action Conference this year, making a stabbing motion for emphasis.

But even critics acknowledged Lake's charisma, and onetime opponents including Gov. Doug Ducey (R), the co-chair of the Republican Governors Association, ultimately coalesced behind her.

A former social worker and state legislator, Hobbs became Arizona's secretary of state in 2018, flipping the seat blue for the first time in more than 20 years. That put her next-in-line if the governor were to leave office — and placed her on the front lines of election officials facing threats and false accusations of wrongdoing in the aftermath of the 2020 election. Americans came to know Hobbs, who became a fixture on national television after that election, as a counterbalance to election denialism in a state that bred unproven theories surrounding Trump's loss.

As governor, Lake would have played a role in certifying the vote in a key battleground for 2024. And if she won, Lake was prepared to call a special legislative session at the state Capitol to try to advance sweeping changes to Arizona's voting systems, which she has derided. She campaigned with other GOP nominees who also denied the 2020 election results, including far-right secretary of state candidate Mark Finchem, who along with Lake sought to ban voting machines in the state. Finchem was projected to lose last Friday along with Trump-backed GOP Senate nominee Blake Masters, who challenged Sen. Mark Kelly (D).

"We know my opponent and her allies have been sowing doubt and confusion throughout this campaign," Hobbs said in a speech on election night, reminding people that the votes would take time to count.

Hobbs's victory means that Democrats have gained a net of two governorships, with victories in Arizona, Maryland and Massachusetts offset by a GOP gain in Nevada. In swing-state Nevada, Republican sheriff Joe Lombardo ousted Gov. Steve Sisolak (D) while criticizing his handling of crime, the coronavirus pandemic and the economy. But despite high GOP hopes for even blue states such as New York and Oregon, Democratic incumbents held on in other places — including in toss-up races in Wisconsin, Michigan and Kansas.

Hobbs's win surprised many Republicans and even some Democrats. Operatives who expected a narrow victory by Kelly were nonetheless predicting that Hobbs — who was not a commanding presence on the campaign trail — would fall to the former news anchor known widely around metro Phoenix, home to most of the state's voters.

Even as incomplete results posted in the middle of last week began to point to a victory for Kelly in the Senate, GOP modeling still put Lake ahead of her Democratic opponent, according to people familiar with the numbers. By the weekend, however, the dynamic had shifted, with one Lake adviser calling the governor's race a "coin toss."

Republican angst intensified after results showed Lake did not perform as well as anticipated, particularly among independent voters, according to one person familiar with the conversations who spoke on the condition of anonymity because they were not authorized to discuss them publicly.

Lake spent the closing days of the campaign catering to the GOP base rather than courting independents, a move that baffled some strategists and donors. More than a third of voters in Arizona are unaffiliated, according to state data, just below the share who identify as Republicans and just over the share of Democrats.

She continued to attack McCain, asking a crowd, "We don't have any McCain Republicans in here, do we? Get the hell out!" She brought Stephen K. Bannon, the former White House chief strategist and executive chairman of Breitbart News, onstage with her and enthused about his far-right radio show, "War Room."

She also baselessly insinuated that Hillary Clinton was trying to kill her and asked her audiences to applaud for Wendy Rogers, a far-right state lawmaker who has promoted white nationalists as "patriots" and called for executing her political adversaries, once remarking, "We need to build more gallows."

The approach enthralled crowds of die-hard supporters, but the enthusiasm appears not to have translated into a broad enough coalition to win.

With ballot counting still underway, some Republicans acknowledged that messaging by Trump, Lake, state GOP party chair Kelli Ward, and others, to vote in person or to drop off early ballots at polling locations on Election Day, may have affected GOP turnout. The instructions ran counter to the popularity of early voting in the state and in the final days of the election, GOP early-ballot performance decreased in Maricopa County.

The GOP strategy relied on a smooth administration of the election. Instead, about a third of polling locations throughout the county had problems with printers that produce ballots on-demand, setting off a cascade of unproven accusations from Lake, Trump and other Republicans that the problems disproportionately targeted GOP areas. County officials forcefully pushed back and a Washington Post analysis of data found that GOP areas in the county were not disproportionately affected by the problems.

Yvonne Wingett Sanchez in Phoenix and Amy B Wang in Washington contributed to this report.

Do you ever get out the rightwing bubble?

Do you ever get out the rightwing bubble?

I don't think that I ever got into the right wing bubble, but I'll admit that somehow I missed the big news that a popular Arizona drag queen blasted Kari Lake as a "hypocrite" for targeting drag performers.

I don't live in Arizona and didn't follow their governors race closely.  Thanks for staying on top of this JBB.  It's important for drag fans to get a win. 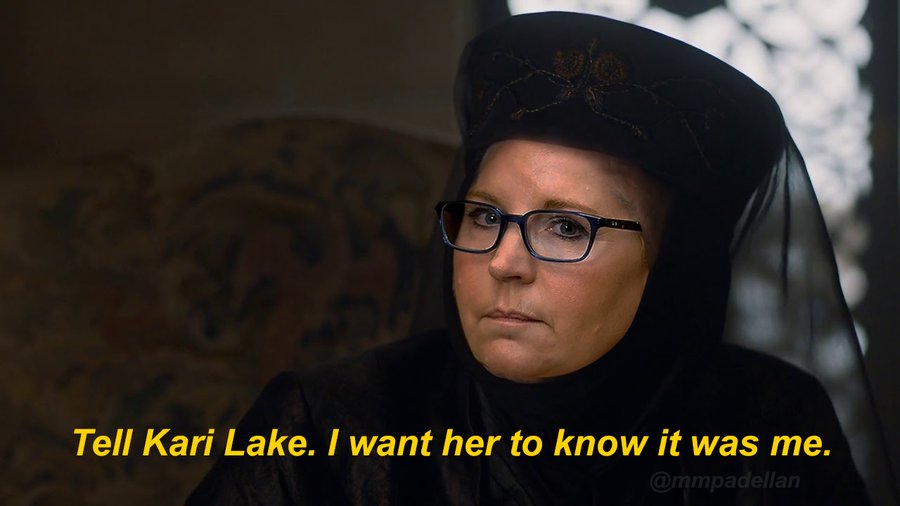 Thank goodness an election denier has been defeated.  Has Boebert won or lost yet?

no results until thursday at the earliest.

Boebert won but only by like 1122 votes so we head to the recount booth LOL.

Why isn't the media calling some of these late races?

hopefully enough to keep her on her knees and back for another decade in asspen...

As many as needed.

If the final tally ends up being within half of a percentage point, a recount may be triggered under Arizona state law.

Remember a couple of weeks ago when Lake tweeted out a "Thank you" to Liz Cheney after her PAC spent $500,000 on an anti-Lake commercial? Liz finally tweeted back last night, "You're welcome"

Nice to see ignorant/bigoted Lake lose, it's going to hard on her to try to keep RWers convinced she was cheated out of the governorship. Oh wait, they are Trumpettes reality doesn't matter to them.

kari should focus on the positive aspects, like taking home no rug burns from mar-a-lardo...

Well there has been talk of Trump having Ivanka as his running mate, but based on historical comments by Trump, Ivanka may still have to deal with rug burned knees.

Isn't that how Biden picked his?

Well there has been talk of Trump having Ivanka as his running mate,

Ivanka is too busy cropping Kimberly out of her sister's wedding pics.

That was funny but I can't blame Ivanka, Kimberly looked like the angel of death in that pic.

Ivanka is too busy cropping Kimberly out of her sister's wedding pics.

So you're saying that Trump would forego her as VP, and instead use her to head his cybersecurity task force?