The Trump Organization will license its name for a planned golf course in Oman, renewing questions about the former president's mixing of politics and business as he appears poised for another run.

The Trump Organization will license its name for a planned golf course in Oman, renewing questions about the former president's mixing of politics and business as he appears poised for another run. 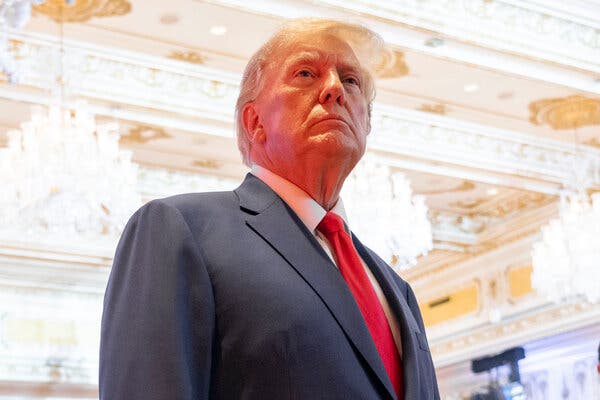 The Trump family is teaming up on the project with Dar Al Arkan, one of Saudi Arabia's largest real estate companies.Credit...Josh Ritchie for The New York Times

WASHINGTON — The Trump family has struck a deal with a Saudi-based real estate company to license its name to a housing and golf complex that will be built in Oman, renewing a swirl of questions about former President Donald J. Trump's mixing of politics and business just as he appears poised to announce a third presidential candidacy.

News of the deal, the first such international marketing agreement the Trump Organization has negotiated since Mr. Trump left the White House, emerged as the former president already faces a string of investigations into his business.

The project is slated to be built in Muscat, Oman, on a hillside adjacent to the Gulf of Oman, and will include a golf resort, villas and two hotels, a company executive said.

The Trump family is teaming up with Dar Al Arkan, one of Saudi Arabia's largest real estate companies, for the project.

Deals like this — in which the Trump family gets a cut of condo sales or golf course revenue in exchange for allowing its name to be used — used to be a major source of revenue for the Trump Organization before Mr. Trump was elected president.

But the family agreed to not sign any new international deals while Mr. Trump was in the White House, and it has been slow to negotiate any new ones since he left office as civil and criminal investigations have distracted the Trumps and put a crimp in the company's growth.

The new deal comes as the Trump Organization is inundated with legal problems. It is on trial in State Supreme Court in Manhattan for criminal tax fraud charges, and it is fighting a lawsuit from the New York attorney general, Letitia James, who accused Mr. Trump, his company and three of his children of fraud.

The financial terms of the deal with Dar Al Arkan were not disclosed.

But a spokesman for the Trump Organization confirmed the paperwork had been signed to have the Trump brand be a part of the $1.6 billion project, which goes by the name Aida and will include an estimated 3,500 residential units, luxury retail and 450 rooms at the hotels.

"It is an honor to work with Dar Al Arkan, who share our vision for superior quality and excellence," the Trump Organization said in the statement. "This will be a truly magnificent project that integrates luxury living and world-class hospitality at the highest levels."

ImageWorkers preparing for the opening of Trump International Golf Club, Dubai, in the United Arab Emirates in 2017.Credit...Bryan Denton for The New York Times

The disclosure of the deal — which came after a reporter for The New York Times asked the Trump company about the project — occurred on the eve of an expected announcement by Mr. Trump of a campaign for president in 2024, once again raising questions about his business dealings with foreign nations.

"The Trump corruption complex is back in business," said Robert Weissman, the president of Public Citizen, a liberal government watchdog group. "It is a remarkable revelation on the expected eve of his presidential candidacy announcement. Even without that, it would be stunning as another in a series of sweetheart deals from the Saudi government to the Trump family."

Mr. Trump had close ties with the Saudi government during his tenure in the White House, authorizing billions of dollars in weapons sales and defending the government there after the murder of the journalist Jamal Khashoggi. His son-in-law, Jared Kushner, secured a $2 billion investment from a fund led by the Saudi crown prince six months after leaving the White House.

Executives involved in the project include Ziad El Chaar, the chief executive of Quara Holding, the conglomerate whose holdings include Dar Al Arkan. Mr. El Chaar used to work at a real estate company that teamed up with the Trump family for a golf project in Dubai.

The Oman project is expected to be built over the coming decade, with design work still underway. A spokesman for the Trump family said it was not yet clear if one of the hotels would be branded in the Trump name, but the golf course will be, making it the 17th golf complex in the company's collection.

Dar Al Arkan, which says it has $8.5 billion in assets, has real estate projects in spots around the world, including in Dubai, Bosnia and China, where the company recently opened a new office.

Mr. Trump has also forged a relationship with the Saudi-backed LIV golf network, which recently held an event at his Doral course in Florida. At that event, Mr. Trump defended the Saudis over questions about human rights abuses there.

"We have human rights issues in this country, too," Mr. Trump told The Times during a brief interview there.

The Trump family has previously announced certain international deals — including a plan to build two golf courses in Indonesia — that so far have not materialized.

As investigations into the The Trump Organization mounted in recent years, the company shelved plans to expand and focused on running its existing properties, including a handful of hotels and commercial properties.

One of the biggest setbacks came in July 2021, when the Manhattan district attorney unveiled tax fraud charges against the company and its long-serving chief financial officer, Allen H. Weisselberg. The charges, which center on off-the-books luxury perks the company doled out to a few executives, led Mr. Weisselberg to plead guilty.

He is scheduled to testify against the Trump Organization at its trial as soon as Tuesday. If the company is convicted, it will face fines and potential blowback from lenders and business partners that might shy away from doing business with a felon. (Mr. Trump was not accused of any wrongdoing in the tax case.)

The New York attorney general's civil case against Mr. Trump — as well as the Trump Organization, Donald Trump Jr., Eric Trump and Ivanka Trump — possibly poses an even greater threat to the company.

Ms. James is essentially seeking to oust the Trumps from control of their company, while restricting its operations. On Monday, at Ms. James's request, the judge overseeing the case appointed an independent monitor to oversee certain aspects of the company.