Elon Musk Polls Twitter Users, Asking Whether He Should Step Down

Elon Musk asked Twitter users to vote Sunday on whether he should step down as head of the social-media platform and pledged to abide by the results, the latest twist in what has been a tumultuous period for the company since his takeover in October.

"Should I step down as head of Twitter? I will abide by the results of this poll," Mr. Musk said in the tweet, posted to his own account. He gave users two options for a response: "Yes" or "No," according to the tweet.

In another tweet shortly after, Mr. Musk added: “As the saying goes, be careful what you wish, as you might get it.”

Mr. Musk has led Twitter Inc. for a little over seven weeks, taking the helm after  buying the social-media platform  in a deal valued at $44 billion in October.

His ownership of the San Francisco-based firm has gotten off to  a turbulent start , with many advertisers having paused spending, as well as  mass layoffs and resignations , and content-moderation actions that have been abrupt and controversial among many users, including  reinstating former President Donald Trump’s account  and disbanding  Twitter’s Trust and Safety Council . Mr. Trump hasn’t tweeted since being reinstated.

The past week has been another one full of twists. Twitter  suspended the accounts  of several journalists, prompting criticism from some lawmakers and officials before Mr. Musk said Saturday that Twitter  would begin reinstating the accounts .

Mr. Musk, who has said he intends to make the platform  a bastion of free speech , appeared to acknowledge some concerns about the recent, abrupt content policy changes. “Going forward, there will be a vote for major policy changes. My apologies. Won’t happen again,” he tweeted shortly before posting the poll about his leadership Sunday.

Late Sunday, the tweets from @TwitterSupport and a note on the company’s website announcing the policy against promoting other social-media platforms appeared to have been deleted. Twitter didn’t immediately respond to a request for comment about the disappearance of the policy note and the tweets.

Mr. Musk has warned about Twitter’s financial condition, saying this past month that the company had suffered “a massive drop in revenue” and was losing over $4 million a day. He later  raised the possibility of bankruptcy .

Mr. Musk’s team this past week reached out for potential fresh investment for Twitter at the same price as the original $44 billion deal, a Twitter investor said.

Mr. Musk also is contending with investor questions about electric-car maker  Tesla  Inc., which he runs in addition to Twitter and rocket company SpaceX. Tesla’s stock is down more than 57% this year.

Mr. Musk this past month said he had  too much work on his plate .

“I expect to reduce my time at Twitter and find somebody else to run Twitter over time,” he testified at a trial about his Tesla pay package this past month. He also said he has been spending most of his time of late focusing on Twitter.

It isn’t clear  who would take over leading Twitter  if Mr. Musk were to step aside. Most of its prior top leaders either were fired or left after he took over.

“No one wants the job who can actually keep Twitter alive. There is no successor,” Mr. Musk tweeted Sunday.

Some Tesla  shareholders have complained  that Mr. Musk’s recent focus on Twitter is hurting the auto maker. This month he sold more than $3.5 billion of  Tesla  stock in  his second round of sales  since buying Twitter. It wasn’t clear what prompted Mr. Musk to sell additional Tesla stock, and the company didn’t respond to a request for comment.

Mr. Musk had previously tweeted, “At risk of stating obvious, beware of debt in turbulent macroeconomic conditions, especially when Fed keeps raising rates.” Twitter, as part of the acquisition by Mr. Musk, took on around $13 billion in debt.

This past month, Mr. Musk reinstated Mr. Trump’s Twitter account after polling users about whether the platform should do so. Nearly 52% of users voted in favor of reinstating Mr. Trump’s account. Mr. Musk has also  polled users about other decisions  around account suspensions.

It is unclear how much the poll results influence Mr. Musk’s decisions.  Last year he asked on Twitter  whether he should sell Tesla stock at a time he had already committed to a share-sell program that wasn’t yet public.

Mr. Musk has been trying  to boost user engagement  in Twitter after lamenting even before closing the deal for the platform that it had lost its attraction to some big name users. He has also tried to make Twitter less dependent on digital advertising, which accounted for about 90% of its revenue. An effort to bolster Twitter’s paid-for subscription service suffered several false starts and  was finally relaunched last week .

The policy change announced on Sunday took aim at the ability of users to link to rival platforms. Twitter said the ban on tweets and accounts engaging in “free promotion” affected platforms including Facebook and Instagram, both owned by  Meta Platforms  Inc., Mastodon, Truth Social—the platform set up by Mr. Trump—and others.

After the new rule was announced, Mr. Musk  tweeted later Sunday that it would be modified : “Policy will be adjusted to suspending accounts only when that account’s *primary* purpose is promotion of competitors, which essentially falls under the no spam rule.”


It isn’t clear   who would take over leading Twitter   if Mr. Musk were to step aside. Most of its prior top leaders either were fired or left after he took over.

Elon, I'll be glad to run it for a while.

So will he step down? 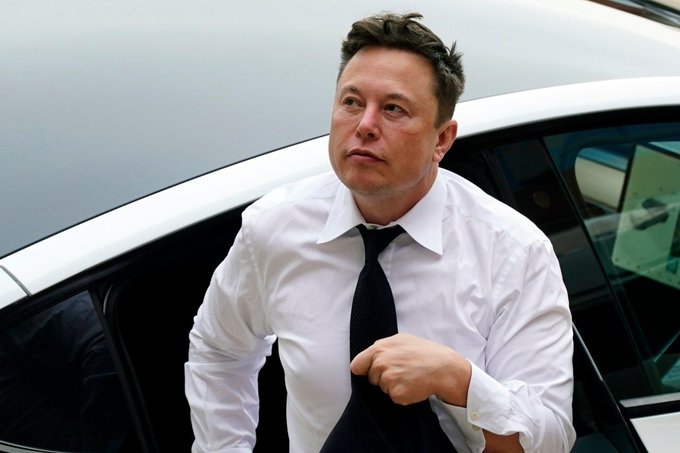 Good morning Elon, some of your stockholders are getting nervous over the slide in Tesla stock.

You should have sold out when I told you.

Twitter is a different matter. It has nothing to do with business.

You should have sold out when I told you.

Twitter is a different matter. It has nothing to do with business.

Yet, Musk has sold billions of dollars worth of Tesla stock to purchase and support Twitter. Some of the biggest stockholders in Tesla see it quite differently than your comment.

"Elon abandoned Tesla and Tesla has no working CEO," KoGuan Leo, the third Largest individual shareholder of Tesla, who describes himself of Musk's "fanboy," tweeted on Wednesday. "Are we merely Elon’s foolish bag holders?" he said. "An executioner, Tim Cook-like is needed, not Elon."

I guess we have that in common.


Some of the biggest stockholders in Tesla see it quite differently than your comment.

Tell them that saving free speech will be his legacy. You may also want to remind them that electric cars becoming the norm is still a few decades away.


BTW: I may not be around much, so lest I forget:

Tell them that saving free speech will be his legacy.

Have you learned nothing after 6+ years of flagrant narcissism?

Tell them that saving free speech will be his legacy. You may also want to remind them that electric cars becoming the norm is still a few decades away.

I'm none of the above, but you have a good holiday season.

Professor Expert
5  Jeremy Retired in NC    one month ago