The Washington Post wants you to believe that Ukraine's oligarchs are going to give up their sinful ways and become serious businessmen like Elon Musk or Sam Bankman-Fried. 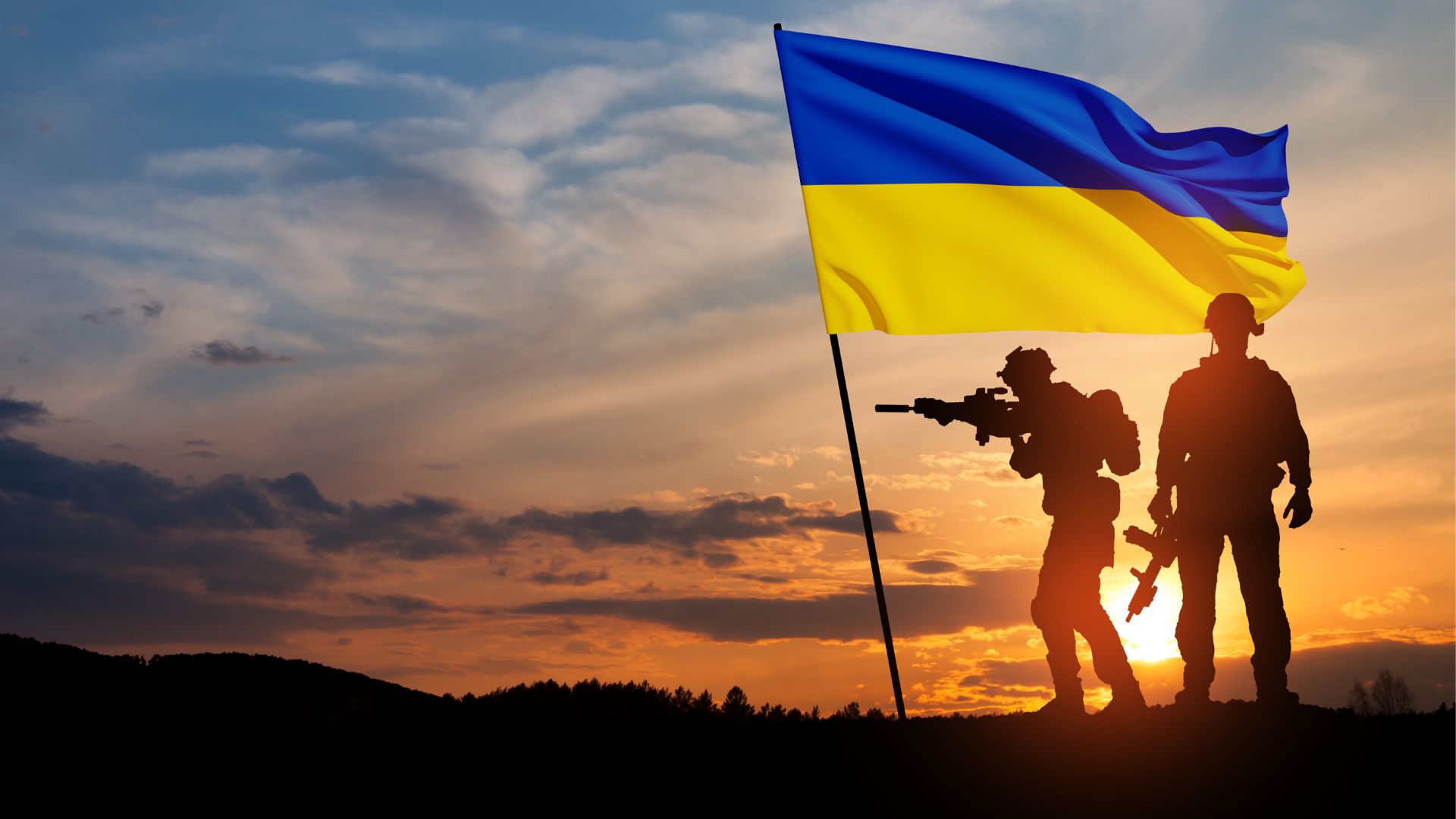 Flag of Ukraine with silhouette of soldiers against the sunrise or sunset. © Hamara / shutterstock.com

As the world awaits the glorious moment forecast by Western media of a total Ukrainian victory over Russia, the final act of a war that has been raging for the past 10 months, The Washington Post reassures its loyal readers that a Slavic neoliberal Utopia is just around the corner. Hyper-billionaire Jeff Bezos's newspaper is not alone in its optimism, but it has consistently been at the forefront of institutions that have contributed — short of supplying arms — to feeding the propaganda mill to make sure the belief in the ultimate success of a noble cause never falters.

Having suffered an egregious and unjust assault from its powerful eastern neighbor, Ukraine is not only standing up to defend its territorial integrity, it has embarked on a process of change that will transform a theater of war into what already resembles a theater of the absurd. Theatrical it will be, just as President Volodymyr Zelenskyy's visit to the US Congress turned out to be an example of choreographed performance art. The Washington Post and US media are doing their damnedest to present the current tragedy as the prelude to a joyous comedy.

The script for what sounds like a double bill goes something like this. As a Ukrainian victory approaches, the reigning oligarchs who have dominated public life in Ukraine for three decades will gracefully leave the stage and return to their dressing rooms. After a quick wardrobe change, they will reappear as modern business executives dedicated — not to greed, as in the previous script — but to the efficient running of a modern European economy functioning inside a shining democracy from which political corruption has been banished and public service enshrined for the benefit of the entire population.

The Washington Post 's writing team, consisting of Kevin Sullivan, David L. Stern and Kostiantyn Khudov, appears to be working on the second script. Earlier this month, they penned an article whose subtitle announces the theme of the drama:"Ukraine may have the opportunity to rebuild a post-war society that is more democratic, less corrupt and more economically diversified."

As creative fiction this reads well. But apparently the writers see themselves not as creative writers but as earnest analysts of future reality. They want us to believe in the likelihood of the scenario they delineate. This is where readers of the news expecting to gain some serious perspective on how the future will play out should remember a simple rule: to be wary of sentences that insert "may" before the verbs they use to define a political or economic future. "May" is a very convenient auxiliary when predicting the future. It's the perfect tool for hedging one's bets. Their forecast that there "may" be a democratic, corruption-free future is equally as truthful as saying "Ukraine may not even exist in two years time." Both are possible. Neither can be classified misinformation.

The news that founds the state of affairs that "may" exist is based on a theme that has been discussed since the adoption last year of a law passed by the Ukrainian government. The law's title bore the word "de-oliharkhizatsia." The Washington Post journalists explain: "The word of the moment in Ukrainian politics is 'de-oliharkhizatsia' or de-oligarchization: a renewal of the long-held goal — and sometimes only faint hope — to free the country's political system of domination by the ultrarich."

In an earlier article for The Washington Post , David Stern quoted the assessment of an official who admitted that the system of corruption was "so strong and well institutionalized that it was quite difficult to break" while promising to "do everything we can to make sure it never recovers." Stern describes the official, Rostyslav Shurma, as "a close economic aide to Zelensky who previously worked for many years as a top executive in Akhmetov's steel company, Metinvest." Who could doubt that the same team that has so successfully resisted Putin's army will do an equally good job making sure Ukraine's corrupt oligarchy "never recovers"?

In one of the articles, the authors cite another official, Viktor Andrusiv, who appreciates the difficulty of the task that consists of removing or at least seriously diminishing the power of oligarchs. "They are not disappearing," he asserts. "The key thing is to end their monopolies, which were produced by their political connections. Now they will have to act more like big businessmen."

The language here gives the game away. This is the world not of business but of political theater. It's all about "acting" a role one is not used to. The oligarchs, unlike the proverbial leopard, will change their spots. It may not be as far-fetched as it sounds. After all, Ukraine's Actor-in-Chief, Volodymyr Zelenskyy — who also happens to be the nation's president — learned to act like a president as the star of the TV series, Servant of the People . Following his lead and perhaps thanks to his coaching, the oligarchs, who will neither be exiled nor dismissed, will learn "to act more like big businessmen."

The two articles in The Washington Post demonstrate the nature of this ambitious project: recasting the old troupe of oligarchs - literally bad guys - in the role of modern executives. In other words, good guys. They are expected to leave behind them the costumes they donned and the manners they cultivated while playing the oligarch. Their histrionics that were more appropriate to tragedy - or rather bad melodrama - will give way to sophisticated comedic banter aimed at promoting the general welfare. That supposes, of course, that yesterday's oligarchs can equal in performance the part played by their obviously talented president.

Readers should note that the authors call the effort at de-oligarchization "a renewal of the long-held goal — and sometimes only faint hope — to free the country's political system of domination by the ultrarich." Why has the goal been held for so long with no result? And how long has it been held? Why should we believe this time around that the hope is no longer faint?

Perhaps they want us to believe that the popular uprising in 2014 that resulted in a successful coup - ably assisted by the likes of Victoria Nuland, John Kerry and Joe Biden -entertained the goal of rooting out corruption? Apparently not, if we are to judge by the performance of the new president, Petro Poroshenko. Mike Eckel writing for Radio Free Europe complained, days before the Russian invasion, that "Poroshenko was seen by critics as being slow to make fundamental changes, or go after powerful officials seen as corrupt." Most people classify Poroshenko himself as an oligarch.

Eckel recalled that "Zelenskiy won the presidency by a landslide over Poroshenko after campaigning on pledges to end the conflict with Russia and to tackle the corruption and bureaucracy that has hamstrung the economy and hurt living standards." Like Obama in the US in 2008, for the people, the new president represented hope and change. And as with Obama, hope waned as change faltered. "Results have been mixed at best," Eckel recounts, "and there is growing suspicion that Zelenskiy administration officials may be undermining those efforts themselves."

Decades after achieving independence from the Soviet Union, the long-held hope of fighting corruption has gone nowhere. Corruption has become a way of life. Zelenskyy himself was propelled forward in his acting and political career by a prominent oligarch, Ihor Kolomoisky, a man Anthony Blinken's State Department banned from entry to the US last March. Four months later Zelenskyy stripped his former promoter of Ukrainian nationality. Some have suggested that this might have been designed to shield the oligarch from the wrath of the de-oligarchization law. Kolomoisky is for the moment safe in Israel, whose nationality he holds.

As of now no one can say where the Billions of aid to Ukraine have gone. Zelensky's personal wealth has exploded since the war. One thing is certain, if they lose the war he will flee and live a lavish life many of us could not imagine.

I know many of you won't like the article or my comment. That's ok, we all want to be accepted and loved by our tribes, Happy Holidays. Our government spent a fortune on social media and coerced social media to censor healthy debate. Most of your opinions formed naturally of course as the outcome was inevitable. We are a violent people and if we can't justify war, we massage ourselves with proxy wars.

Professor Principal
1.1  Tessylo  replied to  independent Liberal @1    one month ago

Sources/citation needed for your allegations?

Sources/citation needed for your allegations?

Professor Principal
1.2  Tessylo  replied to  independent Liberal @1    one month ago

You 'article' is garbage right wing propaganda like your comment/allegation

The source is a left leaning source, nice try. Liberals don't particularly favor proxy wars or wars. Most of what you believe and the people you associate with are establishment democrats who aspire to be neocons on the world stage and corporatist leaches domestically.

If they tell you to jump, please please decide for yourself.

So you are telling me what I know/believe?

The source may be left leaning.  This is one mans' opinion

This is how you lose credibility, this particular news site has a 3rd party that rates our sources.

I checked out the bias.  It is still just one mans' opinion

Is Zelensky an oligarch?

I get it, we all want to belong. All my friends have a cute Ukrainian flag in their social media bios. It's almost is like you are a brave soldier fighting on the front against Putin isn't it?

Never mind that our politicians democrat and republican alike have made a fortune in the last twenty years selling foreign aid for cozy jobs on the boards of Ukrainian companies. It's not like that is common knowledge.

I don't give a shit what you think of me.  I agree the source turns out to be left leaning but it's still just his opinion.

You didn't back up your lies against Zelensky

You deflect.  Answer my question

This is left leaning?

Allegedly.  Maybe I checked out the wrong source for this garbage

I guess anyone can create a website and call it news...

Interesting seeing how the fascists try to spin Russia’s humiliating war in Ukraine.