While ASU said Rittenhouse is not currently enrolled in ASU classes, the 18-year-old said in interviews last week he plans to continue studying there.

The 18-year-old, who was recently acquitted by a Wisconsin jury of all charges in his shooting and killing of two men and wounding of a third in the aftermath of Kenosha protests, was taking online classes at ASU, he said during his testimony.

In recent media interviews, he said he wants to study on campus at ASU.

After Rittenhouse said on the witness stand on Nov. 10 that he was a college student at ASU, the university confirmed he enrolled as a non-degree-seeking online student for the session that started in mid-October, although he hadn't gone through the admissions process and wasn't enrolled in the nursing school. But according to the university, he's not a student anymore.

"Our records show that he is not currently enrolled," ASU spokesperson Jay Thorne wrote in an email. "There was no action taken by the university."

Thorne would not provide more information about whether Rittenhouse withdrew from classes or why his enrollment status changed.

Recent days have seen protests online from ASU student groups and others demanding the university remove Rittenhouse from classes.

Four left-leaning student organizations were expected to hold a rally and protest on the Tempe campus Wednesday in support of getting him off campus — even though he was an online student — and urging ASU to meet other demands including making a statement against white supremacy and further supporting multicultural spaces on campus. There's also an online petition stating ASU should not let Rittenhouse attend, which had over 6,000 signatures as of Monday evening.

Thorne would not comment on the planned rally or the online petition.

Rittenhouse may still enroll at ASU

Although it's not clear from the university why Rittenhouse is no longer enrolled, it seems he can still apply for courses or a degree in the future.

"Any qualified individual can apply for admission," Thorne wrote in an email.

The same would have been true with a guilty verdict. ASU does not ask questions about criminal history in the admissions process or for online enrollment, so even if Rittenhouse was imprisoned, he could continue as an ASU online student, Thorne previously said.

Rittenhouse said during two extensive interviews last week that he planned to continue studying at ASU.

He told Ashleigh Banfield in an interview on NewsNation that he took a "compassionate withdrawal" from two classes "because I got overwhelmed with trial coming on," but that he plans to go back to school.

"Next semester that opens up, I'm going to re-enroll in those classes just so I can finish them up and pursue my career in nursing," he said, adding that while he's been taking classes online, he hopes he can be on campus.

And Rittenhouse told Tucker Carlson on Fox News that there were still things to look into, "but I do intend on going on campus," with the intention of studying nursing, or maybe law, at ASU.

"I'm hoping I can live a quiet, stress-free life and be free of any intimidation or harassment and just go on with my life as a normal 18-year-old kid attending college," he said.

"I'm hoping that people go back and understand the facts and be like, watch the trial, watch the prosecutorial misconduct that I believe happened, and realize that I was an innocent 17-year-old who was violently attacked and defended myself," Rittenhouse told Carlson.

The planned student rally Wednesday has sparked debate online over whether the student groups were right or wrong to call for Rittenhouse's removal from ASU.

A Twitter post announcing the anti-Rittenhouse rally on the Students for Socialism ASU Twitter page said Rittenhouse got "a not-guilty verdict from a flawed 'justice' system,'" but said he's still guilty to the victims and their families.

Groups listed on the flier are Students for Socialism, Students for Justice in Palestine, the Multicultural Solidarity Coalition and MECHA de ASU.

Students for Socialism said on Twitter Monday after news that Rittenhouse was no longer enrolled that the Wednesday rally will still happen for the other demands.

"It is completely outrageous that left-wing student groups are allowed to engage in a dangerous, ongoing harassment campaign against Kyle Rittenhouse, a fellow online ASU student, while university bureaucrats sit on their hands," he said in a Monday statement.

"It is time for the far-left to respect our judicial system, and it is time for administrators at ASU to stand up for the rule of law and protect their students from these thugs."

Thorne, the ASU spokesperson, would not say whether administrators have plans to meet or engage with the student groups rallying for Rittenhouse's expulsion. 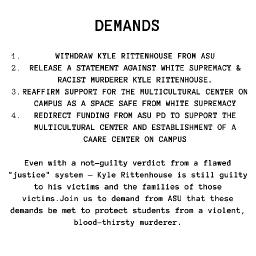 The old "defund the police and create a CAARE center bullshit. Let us know how that works out LOL. And white supremacy hadn't a fucking thing to do with Rittenhouse. Stretch it libs LMAO

If the University does # one and # two from the list they can join those getting sued. It would be a slam dunk case considering they are violating their own written statutes.

Actually, I think Kyle may have a libel? slander? case here. He was found not guilty.

And this, ASU, isn't the only place he has a case

Nah, those types of cases are notoriously difficult to win because you basically have to prove that someone is lying about you with malicious intent and those lies generated measurable harm. Hence the reason why they are rarely taken to court and even rarer still are people actually convicted. Which honestly is the way it should be because otherwise, when expressing an opinion becomes a legal liability, you essentially shutdown the freedom of speech aspect of the first amendment. Although maybe if there were actual consequences for uttering total bullshit our political discourse wouldn't be the cesspool that it is today.

That being said that is not in any way the same as someone being fired from their job for something stupid they say on social media or whatever.

He would have an extremely hard time winning any libel or slander suit he tried to bring.

No he wouldn't. Remember a guy called Nicholas Sandmann? He's got basically the same standing as Sandmann did. Especially with the media. Perhaps not the punks at ASU but we shall see.

Who feeds them this bullshit?

I suppose it's time for a hang'n in the west from the social justice warriors.

Kinda hard to do when he's going to school on-line

Meh, ASU isn't even that great a school. Wildcats all the way baby.

Professor Principal
6  Sparty On    2 months ago