Vic Eldred » Groups » We the People 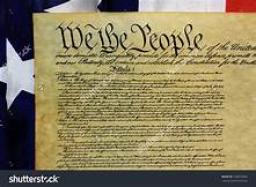 For those who still believe in the Constitution and American Sovereignty.

We here believe in the principles and protections provided in that great document. It is also our goal to allow all points of view - especially in these times when freedom of speech is under attack. “Though liberals do a great deal of talking about hearing other points of view, it sometimes shocks them to learn that there are other points of view"...William F Buckley. In memory of William F Buckley, this group will never align itself with the irrationally of the anticommunist John Birchers, QAnon or racists.

"We believe that liberty is indivisible, and that   political freedom cannot long exist without economic freedom; That the purpose of government is to protect those freedoms through the preservation of internal order, the provision of national defense, and the administration of justice."

For those interested in filing claims against federal and state governments the site below is available:


Via: XXJefferson51  •  104 Comments  •  an hour ago
Nowhere Man last wrote: "..." You find that shocking? How about there are people now voting, who have grown up, lived their entire lives under the political hate we see...

Trump Rips Into 'Corrupt' Establishment Media, 'They Are the Enemy of the People'


Via: Vic Eldred  •  83 Comments  •  7 hours ago
Nowhere Man last wrote: "..." Viewing it from our side, we see exactly the same thing on the democrat side.... The news media is hopelessly biased from any angle you...


Via: Just Jim NC TttH  •  52 Comments  •  14 hours ago
TᵢG last wrote: John, you know the level of research the electorate does;  it is largely limited to what they hear from easy sources and from their circles....

Still thankful for the best country on Earth


Via: XXJefferson51  •  28 Comments  •  yesterday
Gsquared last wrote: Comment 3.2.10 is typical of the babbling incoherency that passes for "discourse" among Trumpist reactionary extremists.

Leftists Panic, Redouble Effort to Keep Minorities 'In Their Place'

In Praise of Thanksgiving


Via: Vic Eldred  •  12 Comments  •  2 days ago
Sunshine last wrote: Enjoy your Thanksgiving everyone and have a wonderful day!


Via: Vic Eldred  •  1 Comments  •  3 days ago
Vic Eldred last wrote: And the word that most represented him was intellectual.

Are You Better Off Today Than You Were 10 Months Ago?


Via: XXJefferson51  •  133 Comments  •  3 days ago
Steve Ott last wrote: I'm probably the wrong person to be asking those type of questions. The company shut the offices 2 years ago and have not renewed the lease, thus,...