'The U.S. and the Holocaust' Review: Eyes That Would Not See

Buzz of the Orient » Groups » MOVIES & TV - CLASSIC to CURRENT » Discussions » 'The U.S. and the Holocaust' Review: Eyes That Would Not See

At the outset of "The U.S. and the Holocaust," the remarkable documentary miniseries directed by Ken Burns, Lynn Novick and Sarah Botstein, a German businessman by the name of Otto Frank enjoys a stroll on a sunny day in Frankfurt in 1933 and snaps pictures of his wife, Edith, and daughters Margot, age 7, and Annelies, age 3. His ancestors had lived in Germany since the 16th century, and he is, we learn, proud to have served as an officer in World War I. What he does not know is the terrors of the future ahead, the transformation of German society that will rob him of status and very nearly his life. Or that Anne would become the author of a world-renowned diary.

The Frank family was Jewish, and these photos were taken in the year Hitler came to power, when Nazi thugs roamed the streets beating up Jews. Most friends—non-Jews—

The family moved to Amsterdam, but Otto’s eyes were on the U.S. Yet America, they soon discovered, was not willing to open its doors to them—and that is the essential, haunting point of this three-part documentary awash in the forever-raw pain of certain facts. Among them, not least, that in the years when escape from the Nazis’ designs for mass murder of the Jews was still possible, the U.S. government, moved by its own prejudices, especially in the State Department—and what that government guessed was the will of the people—was unwilling to accept more than a modest number of the desperate refugees. This, despite the persistent efforts of Americans who felt deeply about the issue, as Eleanor Roosevelt did, though the first lady was in no position to wield power in Congress or to do anything to enlarge the immigration quota.

The unique aspect of this series is that it shines a light on the political aspects of this subject, on the attitudes in the U.S., never before addressed in a TV documentary. It takes due note of the fact that the U.S. took in more Jewish refugees from the Nazis than any other country: The figure the documentary provides is 225,000. Still, there had been nine million Jews in Europe at the beginning of the Nazis’ reign. At the end of the war, two out of three of them had been murdered.

For all the darkness of the history, there is much that’s irresistible about the six hours of this saga. There is, for one thing, the period film footage of tens of thousands crowding Madison Square Garden for anti-Nazi rallies.

There are the American journalists who sounded the alarm, among them Dorothy Thompson, who had read “Mein Kampf,” who raged against the Nazis and who made emotional pleas for the U.S. to open up the quota for the refugees. She also seems to have insulted der Führer, who had her thrown out of Germany. There’s also Edgar Ansel Mowrer of the Chicago Daily News, a journalist who had also displeased the Nazis and had to leave Germany because his safety could not be ensured. Asked by one of the Nazis when he might return, he replied: “When I can come back with about two million of my countrymen.”

The eloquence of the script by Geoffrey C. Ward is everywhere evident, though never more so than in the sections on the Statue of Liberty and the words of poet Emma Lazarus. Familiar as they may be by now, their powers, as used here, approach the sublime.

The same can be said for the heart that went into the writing of these six unforgettable hours.

Another time when the civilized world failed to rise to the occasion.

Similar happened in the late 1800s through early 1900s when the Ottoman Turks raped and massacred over 1.5 million Armenian Christians and other non-Muslims. 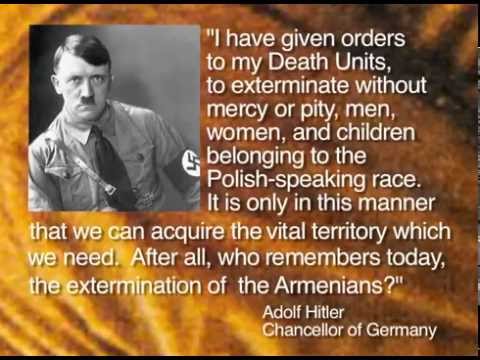 Check out the demographics. It tells a little story.

Part of my wife's ethnicity is Armenian. Her relatives legally emigrated to the US from Ottoman Turkey in the early 1900s to escape persecution and death. They started their new lives in both NYC and Watertown. Some then moved to the Los Angeles area and Fresno. Very strong, hardworking people and patriotic Americans!

I knew quite a few Armenian-Americans who grew up in Watertown. One of my drivers lived there, but he was a more recent arrival. He fought in the Red army during the Soviet–Afghan War. He was in one of the Armenian units. He said the Armenians were among the first sent into battle. Those who grew up in Watertown heard the stories from their parents and to this day have no love for the Turks.

Professor Principal
3  Buzz of the Orient    2 months ago

Eleanor Roosevelt was able to save some talented and intellectual Jews, such as Marc Chagall.  There is a movie about it, someone's War, or someone's Private War, but I can' t find the name.  She saved many more than that and IMO her death was a greater loss to the world than the death of her husband.

I'm sad to say that Canada was no better.  When asked how many Jewish refugees would be allowed to come to Canada, Prime Minister William Lyon Mackenzie King is reputed to have said "None is too many", a line that became the title of a book about those times.

Professor Principal
3.1  seeder  Vic Eldred  replied to  Buzz of the Orient @3    2 months ago

I guess we (both the US and Canada) can at least say we fought and helped defeat the Nazi's.

I couldn't find a movie about Eleanor Roosevelt saving Chagall's life, but I found one which describes how she saved Salvador Dali's and many other Jewish refugees' lives. It's a short film from 2019 called "Nobody Wants Us".

I'm going to have to keep searching.  The agent she sent was played by a fairly well known actor.

Professor Principal
4  Buzz of the Orient    2 months ago

Among the nearly 2,000 people, many of whom Jewish, that Fry helped save around 1940–41 in Vichy France were sculptor Victor Brauner, and artists  Marc Chagall and Marcel Duchamp . Political theorist Hannah Arendt was perhaps the most famous Fry rescuee of them all.

Varian   Fry : The  Man Who Saved the Artists of Europe

Thanks! I think I found it on You Tube. They called him "The American Schindler". I know you can't view YT, but I'm posting the documentary for others.

"Varian Fry: The American Schindler" provides insight on the remarkable mission journalist Varian Fry took on to rescue prominent intellectuals and artists who were targets of the Nazis in Occupied France.

Armenia is on the verge of a sea change in its alliances. Nancy Pelosi's recent visit was well received and the border fights with Azerbaijan have the Armenians looking away from Russia which is supposed to ensure peace but since they are bogged down in Ukraine they are ignoring Armenia. Azerbaijan is an ally of Turkey which is a mortal enemy of Armenia.

Interesting moves are taking place in that area of the world. Russian allies have been sending messages that they are not happy with Russia and there have been direct verbal shots taken at Putin and Russia by the Eurasian countries.