Trailblazing Movie Star Anna May Wong Will Be the First Asian American to Appear on U.S. Currency

Buzz of the Orient » Groups » MOVIES & TV - CLASSIC to CURRENT » Discussions » Trailblazing Movie Star Anna May Wong Will Be the First Asian American to Appear on U.S. Currency

By:   By Ingrid Vasquez

Trailblazing Movie Star Anna May Wong Will Be the First Asian American to Appear on U.S. Currency

Anna May Wong will be on a new quarter, which begins shipping on October 24 Anna May Wong , considered to be the first Chinese American film star in Hollywood, is getting her own quarter.


The late star's quarter, which is set to begin shipping on Oct. 24, is the fifth coin in the United States Mint  American Women Quarters™ Program , which  honors trailblazing women .


Wong, who  died in 1961 , got the first leading role of her career in the 1922 silent film  The Toll of the Sea . The actress went on to make history in 1951 with her role in  The Gallery of Madame Liu-Tsong , becoming the first Asian American lead in a U.S. television show.


"The fifth coin in our American Women Quarters Program honors Anna May Wong, a courageous advocate who  championed for increased representation  and more multi-dimensional roles for Asian American actors," Mint Director Ventris C. Gibson said in a statement. "This quarter is designed to reflect the breadth and depth of accomplishments by Anna May Wong, who overcame challenges and obstacles she faced during her lifetime." Anna May Wong (1905-1961), US actress, wearing a sleeveless white top, posing with her arms folded in a dramatically-lit studio portrait , against a tiger skin background, circa 1930. (Photo by Silver Screen Collection/Getty Images).   SILVER SCREEN COLLECTION/GETTY

On the coin, Wong is featured resting her head on her hand with flapper-era bangs while framed by dots, which represent marquee lights.


"Many prominent actors from the 1920s and 1930s saw their name framed by lightbulbs on movie theater marquees, so I thought it made sense to feature Anna May Wong in this way," Emily Damstra, who designed the coin for the  United States Mint , said in a press release.

The Real Story of Anna May Wong, the Chinese-American Movie Star in Netflix's Hollywood

According to  The New York Times , the U.S. Mint is expected to create more than 300 million quarters, and in doing so, Wong will become the first Asian American to appear on U.S. currency. 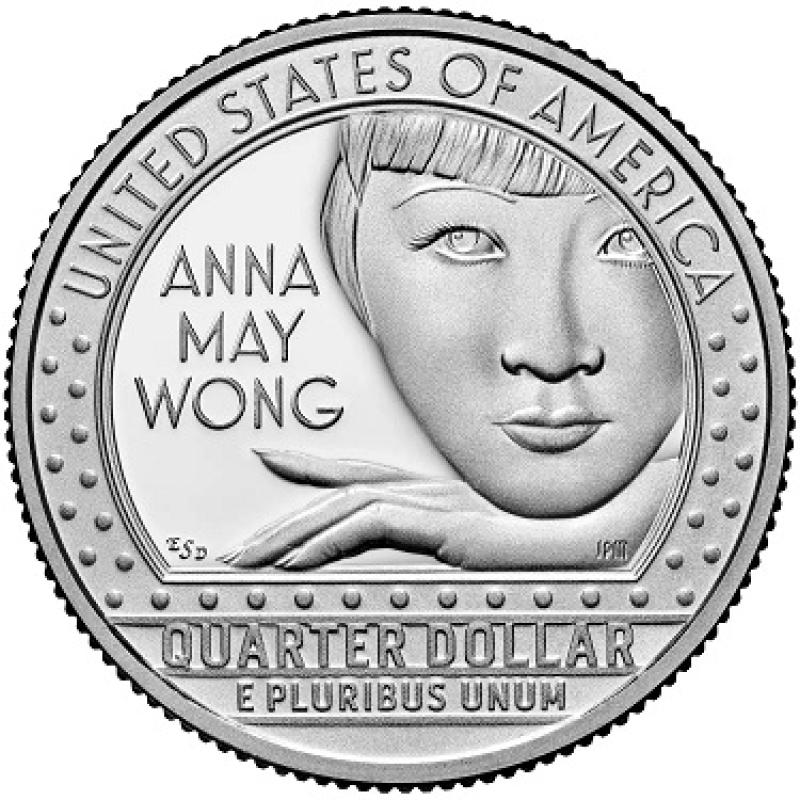 
After dropping out of Los Angeles High School to pursue acting full-time in 1921, she earned her first screen credit in  Bits of Life .

Wong  was continually offered small roles in films  and was turned away from starring as a leading lady, causing her to move to Europe in 1928 in search of better roles.

In 1960, the year before her death, Wong was awarded a star on the Hollywood Walk of Fame. When Lucy Liu became the  second Asian American to receive a star  in 2019, she thanked the late actress for helping pave the way.

"She is remembered as an international film star, fashion icon, television trailblazer, and a champion for greater representation of Asian Americans in film," the U.S. Mint wrote in their news release. "She continues to inspire actors and filmmakers today."

Professor Expert
1  seeder  Buzz of the Orient    4 months ago

RED BOX RULE:  Comments about current political matters are off topic and will be deleted.

Professor Expert
2  seeder  Buzz of the Orient    4 months ago

It is actually unusual that an Asian would have had any decent role in the early days of Hollywood, wherein Caucasian actors would be made up to look Chinese, such as in the Charlie Chan detective movies.  Of course that practice also extended to other races as well.

The story that is linked in the above article, that link being repeated here ->    The Real Story of Anna May Wong, the Chinese-American Movie Star in Netflix's Hollywood does delve more into the racism of Hollywood back in those days, zeroing in on the 1937 movie "The Good Earth" wherein Anna May Wong would have been the perfect female lead but the part was given to a made-up Luise Rainer to make her look Chinese, and who won an Oscar for her performance.  Actually, I thought The Good Earth was a great movie, also starring my favourite actor of all time, Paul Muni, but now that I read the linked story, I'm no longer so happy about that movie.

Although she would have been around 50-years-old in 1955, I think that Anna May Wong would have been wonderful in "Love Is a Many-Splendored Thing", too. She was beautiful!

I've discovered that Chinese women retain their beauty for a long time.

I'm going to ask my son, who lives in Wisconsin, to send me some of those quarters to give to my friends and wife's family here.