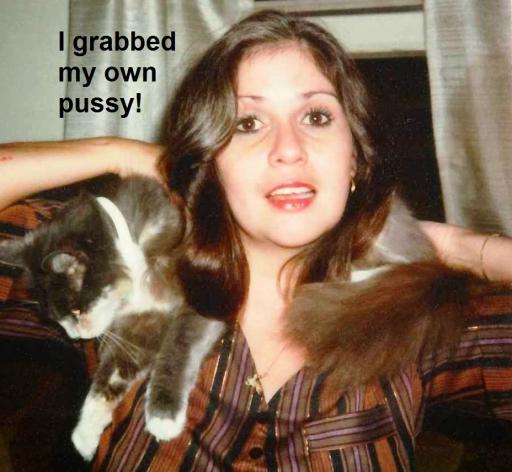 cobaltblue » Guestbook
The guestbook entry was successfully created!
You must be logged in to post to this guestbook!

@cobaltblue, 03/21/18 04:37:11PM
Donald Trump and Barack Obama ended up at the same barber shop. As they sat there, each being worked on by a different barber, not a word was spoken. The barbers were both afraid to start a conversation, for fear that it would turn nasty. As the barbers finished their shaves in silence, the one who had Trump in his chair reached for the aftershave. But Donald was quick to stop him, jokingly saying, "No thanks. My wife, Melania, will smell that and think I've been in a brothel." The second barber turned to Barack and said, "How about you, Mr. Obama?" Barack replied, "Go right ahead, my wife, Michelle, doesn't know what the inside of a brothel smells like."
*******
God asks Bush: "What do you believe in?"
Bush answers: "I believe in the free market, and the strong American nation!"
"Very well," says God. "Come sit to my right."

Next, God asks Obama: "What do you believe in?"
Obama answers: "I believe in the power of democracy, and equal rights for all."
"Good,” says God. "You shall sit to my left."

Finally, God asks Trump: "What do you believe in?"

Trump answers: "I believe you're sitting in my chair
******
A bunch KKK members are out having beers and talking about how much they love the president. They decide to break onto the White House lawn on Christmas Eve to surprise their hero with a nativity scene that represents Trump’s presidency. They make a sign that says “The Donald Trump Presidency Commemorative Creche”. They argue for days over what it should look like, but eventually all agree that it should have no blacks, no Jews and no immigrants. Everything eventually comes together and they set up their ultimate “Make America Great Again” scene on Christmas Eve on the White House Lawn.

The White House wakes up on Christmas morning to a sign on the lawn that says “The Trump Presidency Commemorative Creche” and a nativity scene made up of nothing but a jackass surrounded by sheep.
********
President Trump has just finished another round of golf at Trump National Golf Club in Virginia. As president’s golf cart rolls down the fairway, his caddie turns to him.
”Mr. President, may I share a riddle with you?”
”Sure, go ahead,” Trump nods.
”Who is my father’s son but is not my brother?”
Trump throws his small hands in the air.
”I have no idea.”
”Mr. President, the answer is me!”, caddie exclaims.

Trump gasps with excitement.
”What a tremendous riddle! I will use it tonight to open my cabinet meeting and impress them bigly.”
Later that night, Trump enters the Cabinet Room in the West Wing with bravado. He sits down at the long table surrounded by his cabinet secretaries and advisors and tilts his chin up.
”Ladies and gentlemen, I have a yuge riddle for you tonight, believe me. Here it goes: Who is my father’s son but is not my brother?”
The room goes dead silent. Everybody is frantically staring at each other looking baffled.
Trump hits his little fist on the table and leans back.
”Well, I hate to be braggadocious about it but I knew you guys wouldn’t get it. He is my goddamned caddie!”