What I Learned When I Enrolled In A Race, Gender, And Oppression Studies Class

community » Discussions » Category » Op/Ed » Discussion » What I Learned When I Enrolled In A Race, Gender, And Oppression Studies Class

Many works of academic literature throughout political science, gender studies, sociology, and the like draw on a famous paper entitled the “Five Faces of Oppression,” which lays out a definition of oppression that has now become the gold-standard in grievance studies.

Anyone who has spent time on a college campus has likely run into victimhood ideology. Yet while many campus conservatives are put off by the identity politics and liberalism-run-amok that have transformed many academic departments into adult daycares, they often don’t try to understand the ideology corrupting the modern academy.

So I did exactly that. During my final semester in college, I intentionally took a course focused on race, gender, and the history of oppression in the United States. Of course, this featured ample study of buzzwords like racism, privilege, and identity. The most jarring realization: liberal academics define “oppression” so loosely that their victimhood narrative can never end.

Many works of academic literature throughout political science, gender studies, sociology, and the like draw on a famous paper entitled the   “Five Faces of Oppression,” which lays out a definition of oppression that has now become the gold-standard in grievance studies. The author, the late feminist professor Iris Marion Young, has been cited thousands of times by other academics and her work is taught in courses across the country.

This wouldn’t be so significant, if it weren’t for the fact that the definition of oppression Marion Young establishes is intellectually bankrupt. It provides a framework that could fool young people with ample opportunity in life into thinking that they are victims.

Marion Young lays out five criteria that can supposedly make a person or social group oppressed: exploitation, marginalization, powerlessness, cultural dominance, and violence. Each criterion is defined loosely enough to lend themselves to a kind of subjective self-victimization. This is convincing a generation of young people that their life trajectories are beyond their control.

Take Young’s “exploitation,” for example. She considers a person or group exploited if others use their labor without paying them fairly. Of course, it’s true that everyone deserves fair pay. But the definition of fair pay is entirely subjective, and we all often think that we deserve to be paid more.

Yet that can’t always happen: Lifting the minimum wage to $20 an hour might seem like the right way to help a struggling McDonald’s worker, but she’ll only be left feeling more oppressed when her hours get cut or her job gets automated because McDonald’s can’t make enough money to pay those wages. So it’s simply not sensible to call anyone whose pay is less than ideal “oppressed”—sometimes, that’s just a reality of life. We can’t call every unfortunate situation where people don’t get what they want oppression, or the term loses all meaning.

Marion Young also cites marginalization as another chief indicator of oppression, writing that when groups are viewed as second class or otherwise pushed to society’s margins, they ought to be viewed as oppressed. In theory, this makes sense. But how are we supposed to measure something like that? It seems to me there’s no real way to measure subjective or perceived social standing outside of the most blatant situations. So this feel-good philosophizing really just provides another pathway to victim status for anyone who claims to feel marginalized in one way or another.

The feminist scholar meanders on to the concept of powerlessness, where her academic musings on victimhood begin to sound eerily Marxist. She identifies one form of oppression as political powerlessness, where a supposedly all-powerful ruling class holds most of the sway in a society, leaving an oppressed mass made up of certain groups with little influence.

Unfortunately, this powerlessness is so loosely defined and subjectively situated that even the fact that we live in a democratic society does not assuage this narrative. In fact, others   expanding   on Marion Young’s ideas have used the fact that people   choose not to vote   as evidence of oppression.

Too Many People Agreeing Makes for Oppression

The histrionics continue into a conversation about cultural domination, the notion that when a culture reflects a majority consensus or commonality, anyone in the out-group is inherently “otherized” and oppressed. For example, Young and her acolytes would consider gay people inherently oppressed merely because most people are heterosexual and that reality is reflected in our mass media.

As a gay person, I can tell you that’s it’s not always fun to be in the minority, and in some cases, it can be incredibly difficult. Yet it’s simply not true that   anyone   who is a minority in a given culture is automatically oppressed.

After all, is an American studying abroad in Japan for a semester “oppressed” in any meaningful way? Of course not, even though he’ll certainly be surrounded by an unfamiliar culture. This kind of thinking would theoretically allow any group that constitutes a numerical minority to claim oppression no matter how much progress is objectively made toward equality in society. After all, the sheer fact that a person’s demographic characteristics are a rarity in a given culture tells you nothing about the actual treatment he faces or her actual life situation.
For example, a gay person may not be oppressed—even if he’s surrounded by straight people and gay experiences aren’t reflected in mainstream culture—if he’s treated fairly and faces little discrimination in his actual life. So the idea that “cultural domination” is inherently a form of oppression just doesn’t make sense.

Finally, Young comes to what is likely her most sensible characteristic of oppression when she uses violence as a metric. And it’s indisputable that any person who is a victim of a violent hate crime has certainly experienced discrimination that shouldn’t be ignored. But her definition of “violence” extends to the subjective  fear  of violence, so that any member of a group that faces violence—even if they never have themselves—is considered oppressed.

Fear of Violence vs. Actual Violence

Violence is surely a form of oppression, but this definition is far too loose. After all, this framework would theoretically view as a gay person like me as “oppressed” so long as there are still anti-gay hate crimes occurring out there somewhere, even if I’d never experienced any and led a relatively easy life.

It’s understandable that some groups, statistically more prone to face violence, might have concerns. But we should respond to those concerns with empowerment—like encouraging them to defend themselves through the Second Amendment—not by offering the cheap intellectual cop-out of victimhood ideology. After all, it’s unlikely that we’ll ever reach the point where there are   zero   bias crimes, so claiming oppression until we reach such an imaginary utopia is, frankly, foolish.

Young’s noxious narrative of oppression extends far beyond one academic paper. Her work has inspired a generation of academics who go on to peddle victimhood ideology at colleges across the country, and has no doubt reached hundreds of thousands if not millions of students.

The prevalence of such a loose narrative of victimhood is setting the stage for my generation’s failure. Of course injustices exist that need rectifying, but it’s an amazing time to be an American, with fantastic economic growth, record-low unemployment across many demographics, and an abundance of opportunity for those willing to chase it.

Unfortunately, the Oppression Olympics ideology rife within the modern academy corrodes young people’s outlook, convincing many of my peers that our life outcomes are largely out of our hands, beholden to the vague notion of oppressors in society at large. These theories tell them that nothing is their fault. This annihilation of agency is what’s really oppressing my generation. We are seeing the results of such an education today in congress, they gave us .....  AOC

"I Enrolled In A Race, Gender, And Oppression Studies Class"

"they often don’t try to understand the ideology corrupting the modern academy."

I miss the good ol' days, when folks had "Common Sense" without having to do something like this.

(tick, tick, tick ..… just waiting for some lune to come by and bring up something like "Slavery" as a rebut 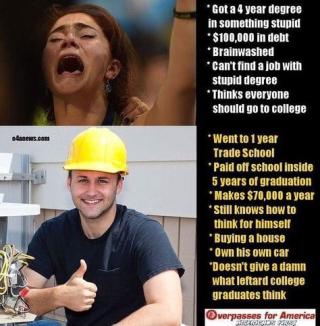 Isn't that how Jim Acosta started?

Isn't that how Jim Acosta started?

His reporting is just …… Grrrrreat ! 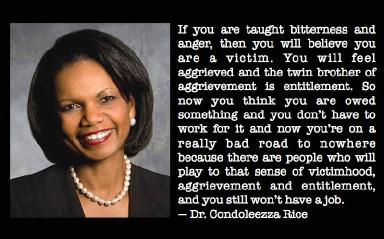 Words of wisdom from a very wise woman

I think I strained my eyeballs from rolling them so much.

These are things I learned in grade-school...and throughout life. I didn't get just one side, my circle of friends was filled with many races. As kids...we asked each other questions...we saw how each friend lived. Some had really nice houses, others had rundown apartments, and the rest lived in military housing like me. I was a military brat. My school bus passed by Resurrection City on the Mall in DC every day. I asked tough questions...my parents would answer as best they could. We learned from each other, and through history lessons in school.

It's rather comical to see this course...and what it teaches. One side...now there's a worldly and open view. Of course, this caters to the 'entitled generation'. No wonder they want Medicare for All...etc. they don't have a clue about REAL LIFE. pfffft

It's too bad we fought and won WWII only to have the Nazi's racist obsessions become the foundation of our education system.