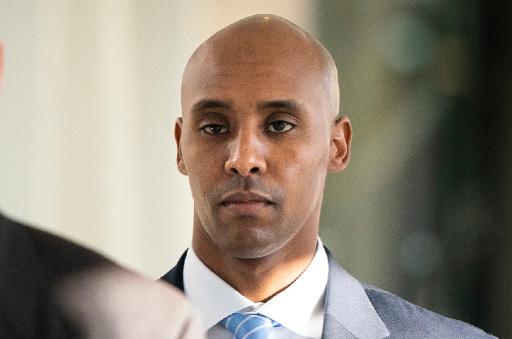 A Minnesota cop was found guilty Tuesday of fatally   shooting Australian bride-to-be Justine Damond   after she called 911 to report a possible rape behind her home.

It took a jury five hours on Monday and six on Tuesday to convict Mohamed Noor of third-degree murder and manslaughter in the July 2017 shooting.

The 33-year-old ex cop and his partner had been responding to Damond’s 911 call and driving down the alley behind her home.

That’s when the unarmed, 40-year-old yoga teacher approached their car in her pink pajamas, and was shot in the stomach.

Noor claimed he fired at the woman because he heard a loud bang on the driver’s door and thought his partner Matthew Harrity’s life was in danger.

Prosecutors questioned whether the noise was real and blasted Noor for shooting without seeing a weapon or Damond’s hands.

Noor could face anywhere from 12 and a half years for the murder charge and four year for the manslaughter charge.

Remember this story?  The cop sitting in a police car who shot an unarmed woman dressed in pajamas who had reported a possible rape, walked up to the car to give information and got shot in the stomach.

Minnesota?  Maybe Ilhan Omar will be able to go to bat for her constituent, as I had read she did for other criminals.

A tragedy within a tragedy.