AMIDROR: IRAN BEHIND THE GAZA ESCALATION

AMIDROR: IRAN BEHIND THE GAZA ESCALATION 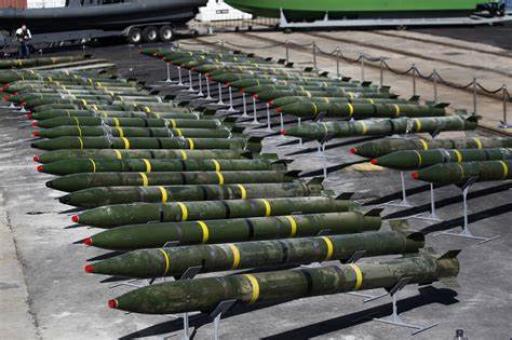 M302 rockets found aboard the Klos C ship are displayed at an Israeli navy base in the Red Sea resort city of Eilat March 10, 2014. The ship seized by the Israeli navy on suspicion of smuggling arms from Iran to the Gaza Strip docked on Saturday in Israel, which planned to put the cargo on display i. (photo credit: AMIR COHEN/REUTERS)

Iran, through Palestinian Islamic Jihad – its proxy in Gaza – is behind the current escalation in the South, former national security adviser Yaakov Amidror said on Sunday.

Amidror, in a conversation with The Israel Project, traced the current round of massive rocket fire on Israel to Friday, when an Islamic Jihad sniper fired on IDF soldiers patrolling the Gaza border, wounding two officers.   Israel responded and killed two Hamas men, and then the rocket barrage began from Gaza.

What made Friday’s shooting on the IDF patrol interesting, Amidror said, was that it took place precisely when Hamas and Islamic Jihad leaders were in Cairo putting the finishing touches on an agreement drawn up by Egypt that was designed to ease the tension in the South.

But while its leaders were in Cairo, Islamic Jihad fired on the soldiers. At first, the organization tried to deny responsibility for the attack.

Islamic Jihad, unlike Hamas, is a completely owned and operated Iranian subsidiary , Amidror said. “It was established by Iran, financed by Iran, and does what Iran wants it to do.”

Iran’s interest, Amidror said, is for Israel to embark on another major operation in Gaza, freeing up Tehran to do what it wants unhindered in Syria.

The Iranian idea, he said, is that “Israel will be busy focusing on Gaza and not have enough energy to deal with the building up of an independent war machine in Syria.”

Iranian pressure, Amidror hinted, is the only explanation for why Islamic Jihad would fire on an IDF patrol while its leaders were in Cairo talking about an arrangement with Israel.

Hamas, Amidror said, was “dragged” into the current escalation by Islamic Jihad. He added that whatever is agreed upon in Cairo – whatever arrangements are reached regarding fishing rights, the economy and the transfer of Qatari funds – “at the end of the day, it will be destroyed by Islamic Jihad if Hamas does not take control and do what it should as an organization that is in control of the Gaza Strip.”

Amidror, a former head of Military intelligence’s Research Department and currently a senior fellow at the Jerusalem Institute for Strategy and Security, said that Islamic Jihad miscalculated in thinking that Israel would not retaliate during the week of Remembrance Day and Independence Day – and with the Eurovision song contest to be held in Tel Aviv a week from Tuesday until the following Saturday night.

Iran, the biggest sponsor of terrorism around the world.  Its proxies include Islamic Jihad and Hezbollah and others.  Look what that planeload of American Dollars sent by Obama is able to finance.

Look what that planeload of American Dollars sent by Obama is able to finance.

Wake up, before the Buzz wears off.

8 countries , the major players, all decided it was best to retard a nuclear Iran, and it was

THEIR MONEY Frozen in the first place.

Yes, Iran sponsors terrorism, ask Trump, so do we , the Saudis', and numerous other M E inhabitants, as well as Trump;s fav, Russian to the point, of a bald face pen.

Am NO fan of Iran, but lets keep things on the level.

In fact he was laughing so hard he had to leave his meeting and go outside.

In January 2016, the Obama administration successfully negotiated the release of four Americans who had been imprisoned in Iran in exchange for the release of seven Iranians who had been imprisoned in the United States.(A fifth American prisoner was released separately.) At around the same time, the U.S. airlifted the equivalent of USD $400 million in various currencies to Tehran, sparking conspiracy theories about the timing:

I agree that the money had nothing to do with the release of prisoners or the nuclear deal, but what is true is what I bolded in the above paragraph, and that has NOT been debunked. The only error I made is to say it was in American dollars, but it was in other cash currencies, totaling the EQUIVALENT of US$400,000,000.

On another seed there was a discussion about people who are unable to admit that they were wrong, and I realized it had to be because they must have a massive inferiority complex, because showing maturity and making such an admission would play right into that complex.

It's approaching 10 p.m. here and I'm going to turn off my computer, so, since I have the feeling that I'd better be around to moderate this seed I'm now locking it and will reopen it in around 9 hours or so.

This seed is now unlocked.