By Mike Blanchfield, The Canadian Press, Reported by the Toronto Star, May 7, 2019 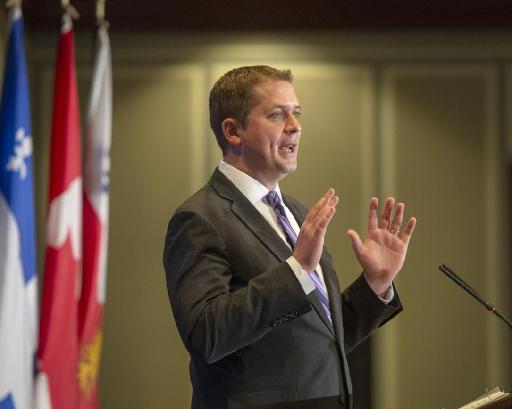 Scheer’s speech in Montreal was a table-setter for the upcoming federal election, the first of several major policy statements the Conservatives say he will make in advance of the fall campaign.

“I will re-open the Office of Religious Freedoms and stand up for religious minorities all around the world. And I will recognize the fact that Jerusalem is the capital of Israel,” Scheer said, in a portion of the speech not included in the prepared text his office distributed.

Afterward, as he exited the Marriott Chateau Champlain’s ballroom followed by a phalanx of journalists, the Conservative leader said what such recognition would mean for the Canadian Embassy: “That obviously would include making sure that Canada’s representation there is in Jerusalem and we’d work with the government of Israel to accomplish those types of things.”

The promise to recognize Jerusalem as Israel’s capital reaffirmed a pledge Scheer first made more than a year ago — but he didn’t include a promise to move the embassy then.

Jerusalem is disputed territory between Israel and the Palestinians and its status is a pivotal question in any peace talks. Israel says Jerusalem is its capital and maintains nearly all its own national government institutions there, but nearly all the embassies in Israel are in Tel Aviv, 70 kilometres away.

Moving Canada’s embassy to Jerusalem would echo U.S. President Donald Trump, who has already angered Palestinians by moving his own country’s mission, and would align Canada more closely with Israel than the last Conservative government of Stephen Harper did.

Article is continued. To read, click the link for "SEEDED CONTENT" at the top of the page.

I'm getting in touch with the local Canadian Consulate to make sure I get an absentee ballot for the October election.  I want to do what I can to help Scheer achieve a majority government.

I hope Scheer puts an end to the reign of Little Lord Fauntleroy!

Now Vic, Little Lord Fauntleroy was the best friend the tenants of the Earl of Dorincourt had. He was a really good kid.

The Conservative Party of Canada is in the lead right now, in accordance with the Angus-Reed poll.

If they win, they'll have plenty to do, starting with getting hospital patients out of the hall

???? You have a source that says that?  I know I've not been back to Canada for more than a decade, but I never saw anything like that in the hospitals.

A step-son who lives in Montreal. His girlfriend had a brief stay at a local hospital up there. He said she was assigned in her hospital bed to the hall. It's not uncommon when there aren't enough hospital rooms I'm told. He went to work for the government in Montreal and had to not only learn French, but had to speak perfect French. Any of that sound right?

As I said, I never saw that overcrowding in hospitals, but I've never been to a Quebec hospital.  As for working for the Quebec provincial or city governments, I have no doubt they require an employee to speak French, it's their chosen language of the two official ones.  Most Quebec citizens speak French and if they speak English as well it's probably no better than I speak French.  Canada has two official languages, not an official and secondary language.  All Canadian government documents in Canada are printed in both languages.  Citizens are entitled to speak either one of them to the exclusion of the other.

You wouldn't think a country naming it's own capitol would be controversial.

You wouldn't think a country naming it's own capitol would be controversial.

If it was any other country on the planet, it wouldn't be an issue.

Anti-Semitism is still a thing.