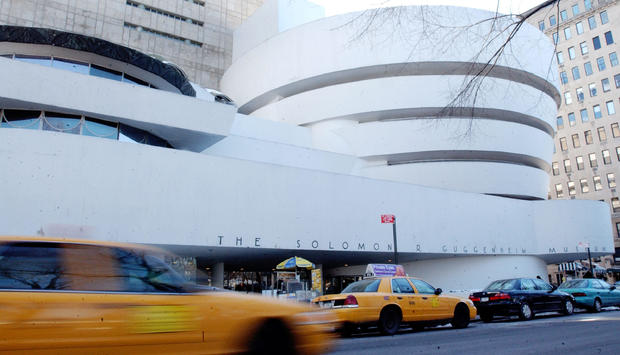 The work of famed American architect Frank Lloyd Wright was recognized Sunday as eight of his buildings, including the Solomon R. Guggenheim Museum in New York City, Los Angeles' Hollyhock House and the Unity Temple in suburban Chicago, were added to the UNESCO World Heritage list.

'Each of these buildings offers innovative solutions to the needs for housing, worship, work or leisure," read a statement from the World Heritage Committee. "Wright's work from this period had a strong impact on the development of modern architecture in Europe.

"The committee met Sunday in Baku, Azerbaijan, and also added to the list Italy's hills of Conegliano and Valdobbiadene, which is home to the world-famous sparkling wine Prosecco.

The group noted Wright's use of "organic architecture," including an open plan, with blurred boundaries between exterior and interior, and the "unprecedented use" of steel and concrete. The Wright buildings are the 24th U.S. site on the list. 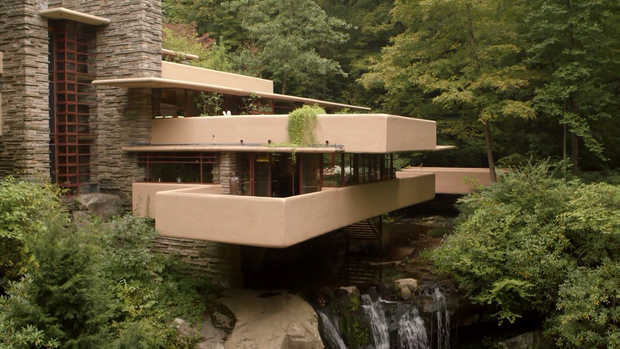 Undated photo shows Fallingwater, a Frank Lloyd Wright design in Bear Run, Pa. Eight buildings, including the Fallingwater, designed by the architect during the first half of the 20th century, were honored as World Heritage sites by United Nations Educational, Scientific and Cultural Organization, or UNESCO, on Sun., July 7, 2019. UNESCO

The other Wright buildings included are the Frederick C. Robie House in Chicago; Taliesin in Spring Green Wisconsin; the Herbert and Katherine Jacobs House in Madison, Wisconsin; Fallingwater in Mill Run, Pennsylvania; and Taliesin West in Scottsdale, Arizona.

Among his most iconic buildings was the Guggenheim with its spiral ramp for viewing galleries. It was completed in 1959, the same year Wright died. 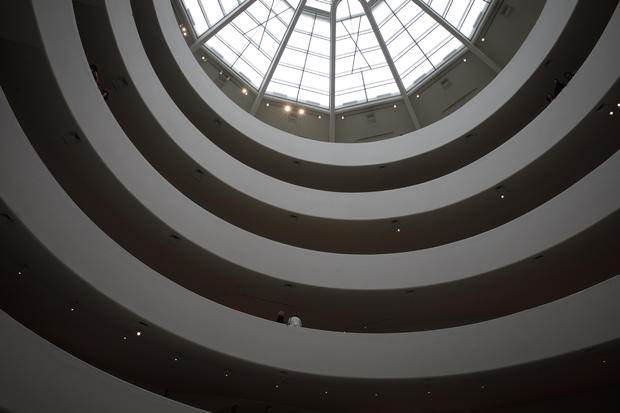 The Unity Temple is in Oak Park, Illinois, which is home to the largest concentration of Wright-designed buildings, including his home and studio. The church, completed in 1908, was one of the first U.S. public buildings to feature exposed concrete, according to the Frank Lloyd Wright Trust, which is based in the Chicago area. The temple and the Robie House, which recently underwent restoration, are standards of Wright's "Prairie style," relying on strong horizontal features like a prairie landscape.

"This really is a significant moment for Frank Lloyd Wright," said trust President & CEO Celeste Adams. "It places him on an international stage."

The Hollyhock House, Wright's first California commission, is now owned by the city of Los Angeles and serves as an arts center. Councilmember Mitch O'Farrell said the building, finished in 1921, "is a beloved masterpiece locally, and now a treasure worldwide."

More than 1,000 sites in 167 countries are recognized by the United Nations' cultural organization. They can be examples of outstanding natural beauty or man-made buildings.

The only Frank Lloyd Wright building I've personally been to is the Guggenheim Museum in NYC, in which I walked the spiral walkway admiring the artworks.  I would have loved to have experienced Falling Water House in person.

Falling Water looks dramatic, but because of the water it is, and has been having structural issues for a long time.

Regular tours are available march through December, no holidays.  Visited in the 80's - the living room is outstanding.

Beth Shalom Synagogue in Elkins Park I have visited many, many times over the decades. 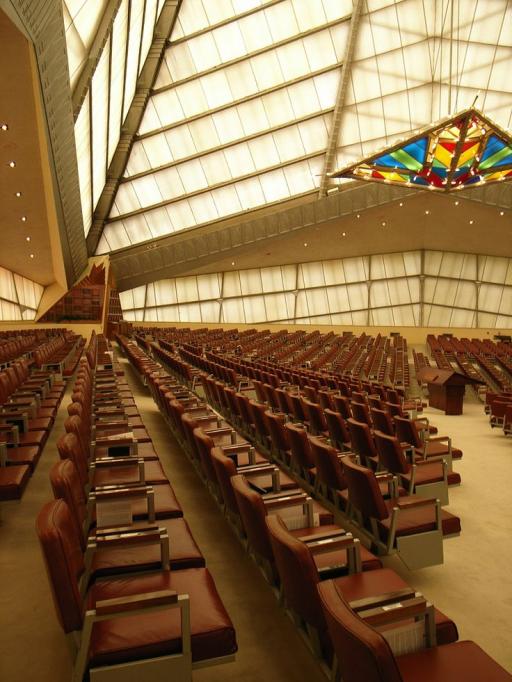 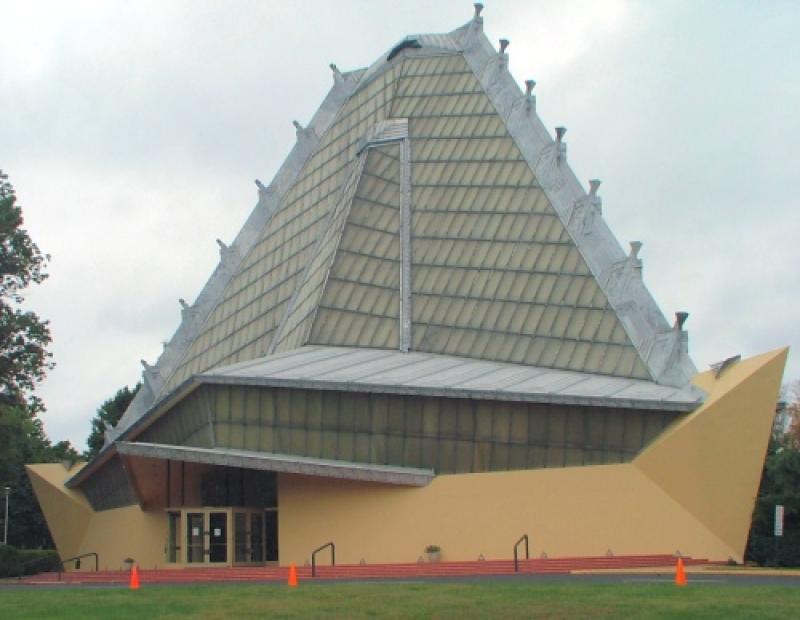 During the day, the interior is lit by natural light entering through the translucent walls overhead. At night, the entire building glows from interior artificial lighting.  The walls and ceilings have never needed repair since construction was finished in 1959.

Very cool building. I had never seen it from the inside.

Yeah, I knew Falling Water House had its imperfections and required expensive restoration.

Only one I have been to is the Grady Gammage Memorial Auditorium at Arizona State University in Tempe, Arizona. This another one of Wright's last designs.

There are 2 Frank Lloyd Wright buildings here in the Buffalo area.

OMG.  Three examples of his work within a 90 minute drive and I didn't know.

One of his houses was featured in the movie A Summer Place.  It was awesome.

I hope they show the movie here - I've been watching a lot of old Hollywood movies here lately.

You would like it.  Sandra Dee was a good girl who did a bad thing with the help of Tab Hunter.

LOL.  I remember back when I was young watching her in movies, but I can't remember one iota about them.

Two of my favorite Frank Lloyd Wrights buildings, one home, one hotel, are Taliesin West in Scottsdale AZ.

And the Biltmore Hotel in Phoenix AZ...

We would stay at the Biltmore whenever possible. We just love the place. It is one of a kind...

I would love to see them one day. I got to see a life size model of Taliesin West at the Museum of Art in Manhattan.

Never mind the hotel, I want that car!

Have you been to Grady Gammage Auditorium on the campus of ASU in Tempe,?

No, I haven't been there....Looked it up and here is a photo of the building...Stunning to say the least.

It was one of his last designs.

Pilgrim Congregational Church in Redding, California was designed in 1958 by the American architect Frank Lloyd Wright , and built between 1960 and 1963.

One of the parishioners contacted Wright, the architect, to inquire about designing a building. Mr. Wright responded to the proposal in January 1958 with these words: "Tell the people of the little church that I will help them out. If I like the ‘feel’ of a job, I take it."

This church is one of Wright's last designs and the last church designed by Wright before he died in 1959. Referring to the church's design, Wright once said, "this little church" was designed as a "Pole and Boulder Gothic". The design was to represent the form of a tent, the ancient dwelling of Israel, as a symbol of temporary, migratory and transient lives. Wright died before he could finish all the drawings for the church.

Unable to secure a bid within their budget, the congregation's building committee voted to build the church themselves. With oversight from Taliesin West , excavation began in June, 1960. With its massive desert rubblestone walls and the 23 giant steel and concrete roof supports that envelop the building, the church seems almost to grow out of the rocky hillside setting. The pulpit area was designed to resemble a cave. The building was dedicated in 1963.

The full plans of the multi-building design are yet to be realized. There is a fireplace in the fellowship hall, which is used as the sanctuary. This wing was to extend into the middle of today’s parking lot where it would intersect the real, 300 seat sanctuary, 100 seat chapel wing, and 17 classroom church school wing - all in a triangular fashion. This central core would have been topped off by a massive, boulder belfry tower at the south end housing the minister's study on its upper floor.

The sanctuary is fascinating.

I think it’s a great design.  I’m glad that you like it. It’s too bad that they couldn’t complete it.