TO STOP THE NEXT ATTACK, EL PASO NEEDS TO BE DESCRIBED AS TERRORISM - ANALYSIS

community » Discussions » Category » Op/Ed » Discussion » TO STOP THE NEXT ATTACK, EL PASO NEEDS TO BE DESCRIBED AS TERRORISM - ANALYSIS

TO STOP THE NEXT ATTACK, EL PASO NEEDS TO BE DESCRIBED AS TERRORISM - ANALYSIS

Due to the gun lobby and the Right’s position on the Second Amendment, it is extremely difficult to enact real change. 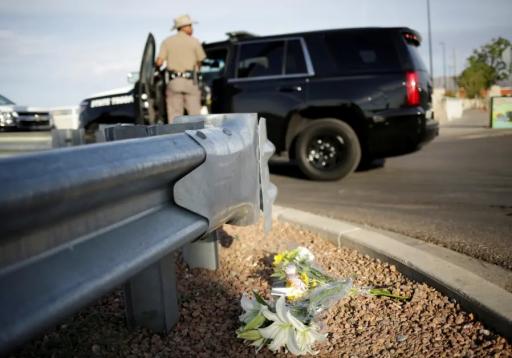 Flowers are seen at the site of a mass shooting where 20 people lost their lives at a Walmart in El Paso, Texas, U.S. August 4, 2019. (photo credit: REUTERS/JOSE LUIS GONZALEZ)

Hours after the shooting on Saturday in El Paso, Texas, US President Donald Trump took to Twitter to send his condolences for a “shooting” he branded as an “act of cowardice.” Senate majority leader Mitch McConnell described the incident as “senseless violence” and “terrible violence.”

Now, imagine that the shooting in El Paso had been perpetrated by a Muslim, originally from Syria or Iraq, and not by Patrick Crusius, a 21-year-old white man. Would Trump have called the murder of 20 people a “shooting” and an “act of cowardice” or would he have referred to the incident as a “terrorist attack” and an “act of terror”?

We can all guess the answer.

Today, gun violence and mass shootings in the US are viewed through political prisms. Due to the gun lobby and the Right’s position on the Second Amendment, it is extremely difficult to enact real change.

Instead, as has been the case after previous such attacks, politicians and commentators conjure reasons for why the shooter carried out the attack. They will tell us that he has a history of mental illness, that he was a white supremacist, that the gun laws shouldn’t be changed because of isolated incidents or – as one senior journalist wrote Sunday – he was just a “lone loser” who made himself deadly with an assault rifle.

The choice of language is all the more important in this era of political polarization. Each side will use the shootings in El Paso and Dayton to advance their political agendas. The Democrats will say that the shooter’s alleged manifesto against Hispanics was inspired by Trump’s anti-immigration policy. The political Right will repeat the usual rhetoric of how it is important to defend the constitution and a person’s right to bear arms.

This is a mistake. The attacks that took place in El Paso and Dayton need to rise above the regular political rhetoric to be able to prevent future attacks.

An example that often comes to mind after attacks of this kind is the 2012 Sandy Hook school shooting in Connecticut, where 26 people were killed, most of whom were children. Half a year later was the Boston Marathon bombing, which killed three people. It was described as terrorism and paralyzed a city. Sandy Hook was written off as just another mass shooting by someone who was mentally ill.

This distinction distorts reality. If attacks like the one in El Paso were defined as terrorism, they would receive the same resources and attention that Islamic terrorism gets from the administration, Congress and the American people.

Using the term would get the country to fight white supremacy, domestic extremists and antisemitism the same way that it fights an ISIS cell, operating in the US or somewhere abroad.

The use of language is key, and is the first step needed to effectively combat this wave of gun violence. It’s time to call these attacks what they are – terrorism.

As I said elsewhere, euphemisms like mental illness, workplace violence, etc. are just watering down what the perpetrators are or are trying to be.  Mass shootings are nothing less than TERRORISM.  What is even SICKER in my mind, is using those tragedies for POLITICAL POINTS, which is rampant in the USA, and on NT pages.

Mass shootings are nothing less than TERRORISM

You have to look at each one individually. Sometimes a guy is just nuts. Other times, politics has got his pants in a twist. Sometimes, it can be both.

Maybe so, but the point the author is making is that it is necessary to treat each such incident as an act of terror, in order to accomplish anything.

I understand, but it's a little too vague to be useful.

If attacks like the one in El Paso were defined as terrorism, they would receive the same resources and attention that Islamic terrorism gets from the administration, Congress and the American people.

Using the term would get the country to fight white supremacy, domestic extremists and antisemitism the same way that it fights an ISIS cell, operating in the US or somewhere abroad.

It might be more illuminating if he defined what this would look like. What resources is he talking about? I'm pretty sure the FBI actually puts a lot of effort into surveilling and interdicting white supremacists in this country.

We can't deploy U.S. military domestically the way we do overseas, so that's not a reasonable expectation. It's also not necessary. We have local and federal cops everywhere and full cooperation from all authorities. I think comparing domestic citizen terror/crime/whatever with global terror might be looking at apples and oranges.

The fact remains that some mass shootings are politically motivated, but most are rooted more in the emotional and mental health issues of the shooter. Undoubtedly, some are going to be a combination, and sometimes we never find out (like Las Vegas).

Here is an article about what most commonly drives these things, and it isn't generally politics (technically, terrorism involves politics). The four most common elements are:

1) The shooter experienced some early childhood trauma and exposure to violence at a young age.

2) The shooter reached some identifiable crisis in recent weeks or months before the shooting.

3) The shooter studied the actions of other shooters, seeking validation for their motives.

4) The shooter had the means and opportunity to carry out his plan, i.e. weapons and an easy target.

The US Attorney office is treating the El Paso shooting as domestic terrorism.

We do need to label an attack as terrorism instead of using terminology as "work place violence" as Obama did for the Ft. Hood shooting because the shooter was Muslim.

I don't think the Las Vegas shooting had any terrorist elements involved.

Guns are not the only weapons used...we also have a history of bombs, airplanes, trucks, used for mass murder.  People who are crazy will find a way.