Lewinsky had an affair with Clinton when she was a 21-year-old White House intern and he was president, conducted mainly in the Oval Office. 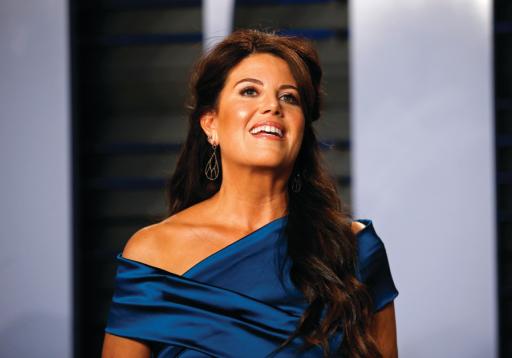 The Bill Clinton-Monica Lewinsky scandal will be the focus of the next season of FX’s American Crime Story, the network announced Tuesday at the Television Critics Association’s summer press tour in Los Angeles, and Lewinsky herself will be one of the series’ producers.

Impeachment: American Crime Story, created by Ryan Murphy, who also made such shows as Glee and American Horror Story, will be the third season of the hit show. The first two focused on the OJ Simpson murder trial and the killing of designer Gianni Versace.

Beanie Feldstein (Booksmart, Lady Bird) will play   Lewinsky who is Jewish , while Sarah Paulson who starred in the first season of American Crime Story as prosecutor Marcia Clark, will portray Linda Tripp, the confidant who betrayed Lewinsky’s trust. No word yet on who will play Clinton.

Murphy had previously that he would adapt Jeffrey Toobin’s 2000 best-seller, A Vast Conspiracy: The Real Sex Scandal that Nearly Brought Down a President, in 2017, but then had second thoughts and scrapped the idea.

In a 2018 interview with The Hollywood Reporter, Murphy said he ran into Lewinsky at a party and, “I told her, ‘Nobody should tell your story but you, and it’s kind of gross if they do. If you want to produce it with me, I would love that. But you should be the producer and you should make all the goddamn money.” Now that she has agreed to produce the series, he decided to revive the project.

Lewinsky had an affair with Clinton conducted mainly in the Oval Office when she was a 21-year-old White House intern and he was president. When their dalliance became public, it created a huge scandal that contributed to impeachment proceedings being initiated against him in 1998. While Clinton’s Democratic supporters fiercely defended him, the lurid coverage of the affair, which provided endless fodder for late-night talk shows, included discussions of what acts constituted sex and whether the president’s DNA would be found on a dress that Lewinsky had not cleaned.

While the Clintons and many commentators insisted the charges against the president were, as Hillary Clinton put it, the work of a “vast right-wing conspiracy,” in the #MeToo climate of today, the former president’s actions and his attempts to cover them up look extremely inappropriate at best, and like a clear case of sexual harassment at worst.

Lewinsky has written extensively about the experience of being at the center of the scandal and has called herself the first victim of cyberbullying. She describes herself on her Twitter account as an “anti-bullying activist.” A Vanity Fair contributor, she told the magazine Tuesday that she was hesitant to allow her story to be dramatized but that Murphy won her trust.

She also wrote: “People have been co-opting and telling my part in this story for decades. In fact, it wasn’t until the past few years that I’ve been able to fully reclaim my narrative; almost 20 years later. But I’m so grateful for the growth we’ve made as a society that allows people like me who have been historically silenced to finally reintroduce my voice to the conversation.”

When she was interviewed for Israeli television by Yonit Levi in 2018,   Lewinsky walked off   after Levi posed her first question, about whether Lewinsky expected to receive a personal apology from Bill Clinton. Lewinsky tweeted that this and any questions about the Clintons were “off-limits” according to an agreement she had with the Israel Television News Company, while the company contended there had been no such agreement.

I was thinking of creating a poll with the questions being who thinks she has saved the semen-soaked dress without cleaning it, or did she clean it.  What do you all think?

Go for it and let me be first to answer....If possible she would have! There are certain women who wear the title of "whore" as a badge of honor. I'm not sure if Ms Lewinsky is one of them, but she, more than anyone else has kept this story going. She seemed all too eager to do this.

Well, you know Vic, we all have to make a living somehow.

What do you all think?

To quote the favorite scapegoat..."What difference at this point does it make."

Well, I needed SOMETHING to prevent SOMEONE from entirely dominating the recently posted articles list.

Interesting isn't it that I'm not the only person to recently put the words "someone" and "something" into a short phrase.

I didn't realize there was a contest but

you are currently one ahead of BF, XX, Vic and JR

It appears that the Democrat members are not particularly pleased about my posting this article. LOL

Oh Noes...  someone is upset about the tenor of a posted article?  Someone may be upset?

I think what gets me is a women is labeled as a whore and the guy gets away without being labeled. A guy can have sex with as many women as he wants and that is considered okay... if a women has sex with many men, she is called a whore. I do realize that some women go after men of power, so I don’t care for that.  I just think it is not fair to women in this regard.

For all we know, Bill Clinton may have been the only person Monica has had a sexual relationship with, so it may not be right to call her a whore anyway.  Besides a whore does it for money, so that nomenclature is not applicable.

She was his employee he was paying for the sex with our tax dollars.

I will stick to the topic this time.

Do I think she washed the dress? No... I would hope she threw that thing out!

This should set Hillary on tilt.

I wouldn't doubt she saved the "Dress", and put a "Shadow Box" around it and hung it in her living room as a "Reminder" of "being with" the most important person on the planet.

I think they call that a "Participation Trophy" !

That DID go through my mind when I posted this article.

That DID go through my mind when I posted this article.