'How does it even happen?': Bear locks itself in car, sets off alarm outside B.C. home

community » Discussions » Category » World News » Discussion » 'How does it even happen?': Bear locks itself in car, sets off alarm outside B.C. home

'How does it even happen?': Bear locks itself in car, sets off alarm outside B.C. [British Columbia] home 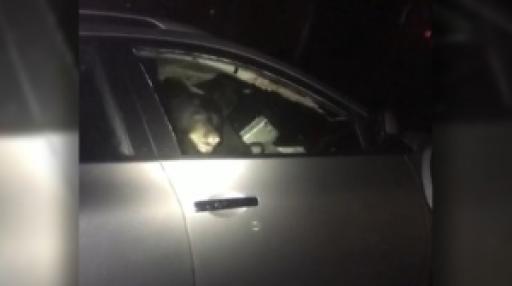 A very hairy break-in that was caught on camera early Friday morning in Metro Vancouver has prompted a reminder from police about the importance of being bear aware.

The Port Moody Police Department said officers were called to a home on Ioco Road after a "suspect" managed to break into the homeowners' car "with his bear hands."

Unfortunately, the culprit – a curious black bear – also somehow managed to lock itself inside the vehicle.

Video captured at the scene shows the bear sitting in the front passenger seat, surrounded by what is clearly a very damaged interior. At one point, the animal suddenly grabs what appears to be a seatbelt in its jaws and yanks on it.

"How does it even happen?" an officer can be heard saying in video of the incident. "How does a bear get into somebody's car and lock the door? Only in Port Moody."

Degoey said the damage inflicted on the inside of the vehicle was so extensive, the entire interior will likely need to be replaced.

"The car was just annihilated from the inside, like ruined," he said.

Conservation officers attended the scene and freed the animal by opening the door. The bear did not appear to have been harmed while it was thrashing inside the vehicle, and was allowed to go on its way.

The homeowners were adamant that they hadn't left any food in the car, so it's unclear what drew the animal inside. Degoey said the key takeaway is that being bear aware doesn't just mean securing your garbage – it also helps to keep your car locked overnight.

"Keep your doors locked because you don't know who is going to get inside it," he said.

BUZZ NOTE:  There is a video as part of this article, which you can access by either clicking the "SEEDED CONTENT" link a the top of this page, or this link:

It's a good thing they didn't leave the keys in the car.  Canadian bears are really smart.

He was looking for a picanik basket.