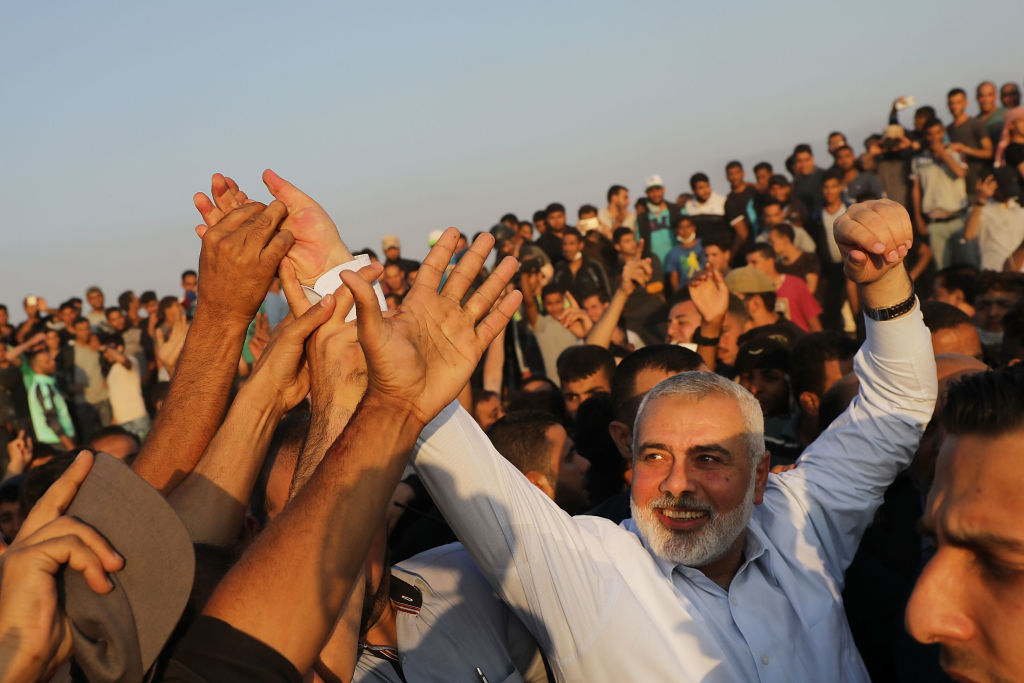 In recent years, reports have surfaced regarding the wealth and luxurious lives of Hamas leaders, such as Ismail Haniyeh (pictured), whose capital is estimated at $4 million. It is time for the international community to wake up to the fact that it is wealthy Hamas leaders, and not Israel, who are responsible for the humanitarian and economic disaster that is known as the Gaza Strip. (Image source: Spencer Platt/Getty Images)

The leaders of Hamas, the Palestinian terror group ruling the Gaza Strip since 2007, seem to have hearts of stone regarding the suffering of the people living under their regime.

These leaders have no problem sending Palestinians to risk their lives near the border with Israel, while they and their families enjoy a comfortable life. More than 250 Palestinians have been killed and thousands injured in   clashes   with the Israel Defense Forces since the beginning of the Hamas-sponsored weekly protests near the Gaza-Israel border in March 2018.

While the protests are continuing and more Palestinians continue to put their lives at risk at the behest of the Hamas leadership, the terror group's senior officials are busy throwing lavish parties for their family members and upgrading their personal treasuries. It is as if the Hamas leaders were telling their people: Sacrifice yourself for the cause of destroying Israel and killing Jews so that we and our families can continue to live it up.

The latest example of this exploitation of Palestinians in the Gaza Strip surfaced in the form of a   video   of the birthday celebration of 20-year-old Mohammed, son of senior Hamas official Ghazi Hamad.

Hamad, a former deputy foreign minister in the Hamas government of 2012, currently   serves   as deputy minister in the Hamas-controlled Ministry for Social Welfare and is personally entrusted with overseeing aid to the most impoverished families in the Gaza Strip. Ironically, the man in charge of caring for the poorest families was caught on camera throwing a lavish birthday   party   for his son.

The   video   of the birthday party in the Gaza Strip has gone viral on social media. Many Palestinians expressed   outrage   over the celebration which, they said, took place at a time when the residents of the Hamas-ruled coastal enclave are facing dire economic conditions and are being killed in clashes with the Israeli security forces as they try to infiltrate the border with Israel and throw rocks, petrol bombs and explosive devices at Israeli soldiers.

"The sons of our leaders are always different from the ordinary people,"   commented   Facebook user Ahmad Hassan.

Another Palestinian, Bashar Bashar,   wrote : "This party is at the expense of the victims of the weekly demonstrations [near the border with Israel]."

Hussein Qatoush, yet another Facebook user,   wrote : "Frustrated Palestinian youths are committing suicide because of poverty, while the sons of the leaders are holding birthday parties!"

Many other social media users   said   they were not surprised to see a Hamas leader throwing a big   party   for his son at a time when young Palestinians are fleeing the Gaza Strip because of soaring unemployment and economic hardship there.

The good news is that a growing number of Palestinians seem to be aware of the corruption of their Hamas leaders and the wide gap between the leadership and the people. The bad news is that Palestinians are still afraid to revolt against the Hamas rulers who have been holding them hostage in the Gaza Strip since the terror group's violent takeover of the area 12 years ago.

Alarmed by the widespread criticism, the Hamas leader rushed to   issue   an "apology," claiming that his son's friends were the ones who held the birthday party and not him.

"I'm not satisfied with this party and I don't accept it," Hamad   said .

"I apologize to everyone for this grave mistake. I live a simple life, like the rest of our people. I fully understand the suffering and harsh conditions of our people, and repeat my apology. I promise that this will never happen again."

The Hamas leader, who also   promised   to "punish" his son, would never have apologized had the video of his son's birthday bash not been leaked on social media. His apology hardly passes as sincere.

In truth, Hamad and the rest of the Hamas leaders owe an apology to the families of the Palestinians they send to attack Israeli soldiers near the border with Israel.

They owe an apology to the thousands of Palestinians killed in wars with Israel because of the rockets Hamas and other terror groups have been firing at Israeli civilians for the past 12 years.

They owe an apology to the tens of thousands of unemployed Palestinians, some of whom are being forced to flee the Gaza Strip in search of a decent life abroad.

They owe an apology to the hundreds of thousands of Palestinian families living in squalor and misery as a result of Hamas's disastrous policies and actions.

Hamad is very, very far from alone in his appropriation of money intended for indigent Palestinians.

In an attempt to calm down Palestinians concerning this issue, Hamas   announced   on September 23 that it decided to impose a fine of 5,000 Jordan Dinars (about $7,000) on the son of another Hamas leader.

Anas, the son of senior Hamas official Ismail Radwan, was accused of taking advantage of a Saudi grant to families of Palestinians killed in clashes with Israel to travel to Mecca for the Islamic pilgrimage ( hajj ). Although the Saudi grant was dedicated only for those families, the son of the Hamas leader was able to add his name to the list of beneficiaries.

Many Palestinians took to social media to express their outrage over the trip to Mecca, seriously embarrassing the Hamas leadership for nepotism and corruption.

After the uproar, Hamas   formed   a commission of inquiry; it concluded that the son of the Hamas leader had acted in "violation of the norms and procedures" concerning the Saudi grant.

Let us return to Hamad, who claims that he lives a "simple life": this is a laughable lie.

In recent years, various   reports   have surfaced regarding the wealth and luxurious lives of Hamas leaders.

One   report   suggested that Musa Abu Marzouk, the No. 2 in Hamas, "is considered one of Hamas's wealthiest billionaires, with a wealth estimated at $2-3 billion."

Another report said that the former leader of Hamas, Khaled Masha'al, is worth $2.6 billion. The next Hamas tycoon is Ismail Haniyeh, whose capital is estimated at $4 million,   according   to Dr. Moshe Elad, a lecturer in the Middle East Department of the Western Galilee Academic College.

Hamas's rivals in the ruling Fatah faction, headed by Palestinian Authority President Mahmoud Abbas,   say   that while Gaza is one of the poorest places in the world, there are 1,700 millionaires among Hamas members. Professor Ahmed Karima of Al-Azhar University, pointed out that Hamas has long   become   a movement of millionaires. According to Karima, Hamas can count no fewer than 1,200 millionaires among its members.

Generally speaking, it is heartwarming to see parents celebrating their children's birthdays. Palestinians, of course, are entitled to hold birthday parties and other celebrations. It is better to see Palestinians dancing and singing than stabbing Jews or firing rockets at Israeli cities.

The problem, however, is when your father is a senior terrorist leader who devotes himself to inciting against Israel and Jews and encouraging   other   young Palestinians to sacrifice   their   lives in the war against Israel. Hamad, like the rest of the Hamas leaders, would never send his own son to attack soldiers at the border with Israel. As far as these leaders are concerned, the blood of their children is apparently redder than the blood of other Palestinians.

It is time for the Palestinians in the Gaza Strip to revolt against the leaders who are keeping them chained in poverty and sending them to their deaths. The birthday party scandal could serve as a trigger for such a revolt. It is also time for the international community to wake up to the fact that it is wealthy Hamas leaders, and not Israel, who are responsible for the humanitarian and economic disaster that is known as the Gaza Strip.

Bassam Tawil is a Muslim Arab based on the Middle East.

I guess it's not unusual to see the Palestinian/Hamas leaders becoming millionaires, even billionaires, while the ordinary Palestinians are destitute. I wonder how that happens. s/