PA leaders repeatedly define Jesus as a Palestinian who preached Islam, thus denying not only Jewish history, but also the history and legitimacy of Christianity. 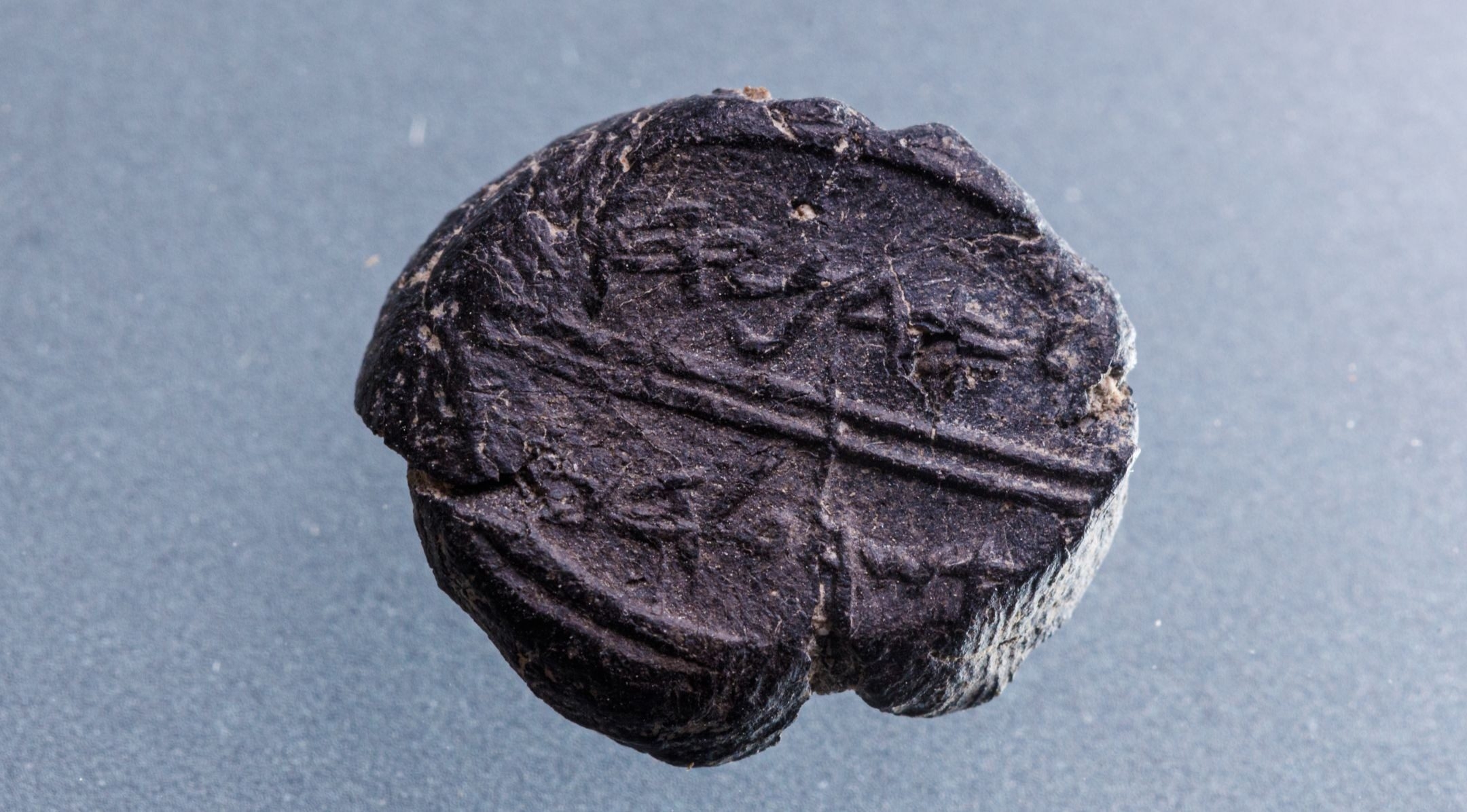 The City of David Foundation recently delivered a major blow to the effort to erase Judaism's 3,000-year ties to Jerusalem. On September 9, the foundation's leading archaeologist announced the discovery of a 2,600-year-old royal seal, found near the Western Wall in the Old City of Jerusalem, which bears the name (in Hebrew) of Adenyahu, a son of King David mentioned in the biblical Book of Kings. (Image source: Eliyahu Yanai/City of David Foundation)

The   City of David Foundation   recently delivered a major blow to the   Arab effort to erase Judaism's 3,000-year ties to Jerusalem. On September 9, the foundation's leading archaeologist,   Eli Shukron , announced the discovery of a   2,600-year-old royal seal , found near the Western Wall in the Old City of Jerusalem, which bears the name (in Hebrew) of Adenyahu, a son of King David mentioned in the biblical Book of Kings.

As has been true with previous   archaeological discoveries   in Israel, however, this one is unlikely to put a dent in the   long-term international campaign   to delegitimize the Jewish state by   rewriting and distorting its history , even by   renaming   the Jewish sites Rachel's Tomb near Bethlehem to " Bilal ibn Rabah mosque " (it was never a mosque) and Hebron's Tomb of the Patriarchs the   Ibrahimi Mosque .

This international campaign of delegitimization, moreover, far predates the establishment of the modern Jewish state.

The ancient Romans tried to strip the area of it Jewish identity to make it more Roman by   renaming Judea   "Syria Palaestina."

Later, Abd al-Malik ibn Marwan, the fifth caliph of the Umayyad dynasty of Syria -- who ruled during the late 7th century -- employed the tactic of   delegitimizing both Judaism and Christianity   by constructing the Dome of the Rock on the Temple Mount in Jerusalem, atop the biblical spot where Abraham was prepared to sacrifice his son, Isaac -- also the site of the twice-destroyed Jewish Temples. The famous Western Wall, a   retaining structure   of the Temple Mount, is all that remains of their existence.

In contemporary times, a version of this tactic of revisionist history was attempted by the late PLO Chairman Yasser Arafat, who -- during the US-brokered Palestinian-Israeli peace talks at Camp David in 2000 -- tried to   assert that the first and second Jewish temples were   not erected in Jerusalem , but rather miles away in Nablus.

That episode followed a staggering report, three years earlier, by the Palestinian Ministry of Information, according to which   no archaeological excavations   in Jerusalem had supposedly ever unearthed Jewish artifacts.

According to   extensive research by Palestinian Media Watch , however:


Rewriting the history of the Land of Israel in order to deny Israel's right to exist is central to Palestinian Authority (PA) policy. Long before it started the PA terror campaign (the "Intifada," 2000-2005), the PA was fighting a history war – erasing Jewish history and replacing it with a fabricated Palestinian history. This rewriting has two central goals:


1- Erase the Jewish nation's 3,000 year history in the Land of Israel;
2- Invent ancient Palestinian, Muslim and Arab histories in the land.

The goal of this historical revision as a political strategy was first expressed publicly at a conference of Palestinian historians in 1998, when rewriting history was linked to the political goal of denying Israel's right to exist:


"Dr. Yussuf Alzamili [Chairman History Department, Khan Yunis Educational College] called on all universities and colleges to write the history of Palestine and to guard it, and not to enable the [foreign] implants and enemies to distort it or to legitimize the existence of Jews on this land... [History lecturer Abu Amar] clarified that there is no connection between the ancient generation of Jews and the new generation." [Al-Ayyam, Dec. 4, 1998]

Erasing Jewish history in the land of Israel is followed by the PA's invention of ancient and modern histories that support its political ideology and claim to the land of Israel. The Holocaust and other aspects of Jewish history are alternately denied, downplayed or distorted. Another distortion is to hide from Palestinians that Jesus was a Jew who lived in the Land of Judea/Israel. PA leaders repeatedly define Jesus as a Palestinian who preached Islam, thus denying not only Jewish history, but also the history and legitimacy of Christianity.


The cumulative effect of this concerted effort has been both counter-factual and unfortunate. Already in 2006, the World Heritage Site Committee of the United Nations Economic, Social, and Cultural Organization (UNESCO) passed a resolution referring to the   Temple Mount   -- the holiest site in Judaism -- solely by its Arabic, Islamic name,   al-Haram al-Sharif .

Nonetheless, extensive   documentation   from antiquity and countless archaeological finds continue to   confirm   both Judaism's ties to Jerusalem and the Jewish people's   millennia-old presence   in the land of Israel.

Foremost among the findings that provide proof of ancient writings about the Jews and Jerusalem -- apart from the Bible, much of which is magnificently displayed by the new excavation of the City of David – are the written histories by   Josephus Flavius   (37-100 AD),   The History of the Peloponnesian War   by Thucydides, and the famous Dead Sea Scrolls. There are also extraordinary excavations by the Israeli archaeologist Dr. Eilat Mazor, who in 2012 unearthed a   Solomon-era wall and other related sites . This   followed   and preceded many other discoveries, such as a wide street filled   remnants of shops and tunnels , as noted in the New Testament, that runs near the Western Wall.

Where Palestinian propaganda is concerned, however, none of the above appears to matter. During the very week in early September that the   City of David Foundation   revealed the ancient Hebrew seal found near the Western Wall,   Dr. Ghassan Weshah , the head of the History and Archaeology Department at the Islamic University of Gaza,   told the Gaza news service Felesteen :


"One of the biggest lies of the Zionists with regard to the Al-Aqsa Mosque is that it was built on the ruins of the Temple, which was destroyed on August 21, 586 BCE. This is a false statement. There is no other building under the Al-Aqsa Mosque."

If statements such as Weshah's were not taken seriously by members of the international community, they would be dismissed as the propaganda tools they are by the reams of irrefutable scientific   evidence   to the contrary. It is thus incumbent on all honest academics to be vigilant and determined about setting the record straight.


Dr. Lawrence A. Franklin was the Iran Desk Officer for Secretary of Defense Rumsfeld. He also served on active duty with the U.S. Army and as a Colonel in the Air Force Reserve.

I understand that due to the demand by CAIR, UNESCO intends to rename Plymouth Rock to be The Rock of Arabia, since the Arabs were there before the Pilgrims.

Voted up. Truth to power!