Former acting attorney general defends Trump: 'Abuse of power is not a crime'

Federalist Papers No. 65 notes that impeachment can involve "abuse or violation of some public trust.” Articles of impeachment against former President Nixon were premised on abuse of power.

Former acting Attorney General  Matthew Whitaker  on Tuesday night defended  President Trump  amid a House impeachment inquiry into his administration's dealings with Ukraine, arguing that Democrats needed evidence of a crime and that "abuse of power" didn't qualify as one.

"What evidence of a crime do you have? Abuse of power is not a crime," Whitaker, who served as acting head of the Justice Department between November 2018 and March, said on Fox News's "The Ingraham Angle."

Whitaker went on to say that "the Constitution is very clear" when it comes to impeachment, asserting the step could only be taken due to "some pretty egregious behavior."

"[House Democrats] cannot tell the American people what this case is about because they have to do it in secret," he added, referring to the private hearings a group of House committees are conducting as part of the inquiry.

A president can be impeached and removed from office on conviction of treason, bribery or other high crimes and misdemeanors,  according to the Constitution . Federalist Papers No. 65 notes that impeachment can involve "abuse or violation of some public trust.”

Articles of impeachment against former President Nixon were  premised  on abuse of power.

" Nancy Pelosi  and the Democrats are convinced they're going to impeach the president. They think this is the next best thing after the Mueller investigation," Whitaker said, before labeling Trump a "warrior" who would "fight this."

A wave of revelations regarding Trump's interactions with Ukrainian President Volodymyr Zelensky led Speaker Nancy Pelosi (D-Calif.) to launch a formal impeachment inquiry into the president last month. A whistleblower complaint accusing Trump of pressuring Ukraine to open an investigation into former Vice President  Joe Biden , a leading Democratic presidential candidate, and his son Hunter is at the heart of the inquiry.

A White House memorandum of the president's July 25 phone call with Zelensky confirmed several aspects of the complaint, including Trump's request to open an investigation into the Bidens.

Whitaker's comments Tuesday came the same day a top U.S. diplomat gave revealing testimony to Congress regarding the Trump administration's efforts to open investigations into the Biden family and the 2016 election. 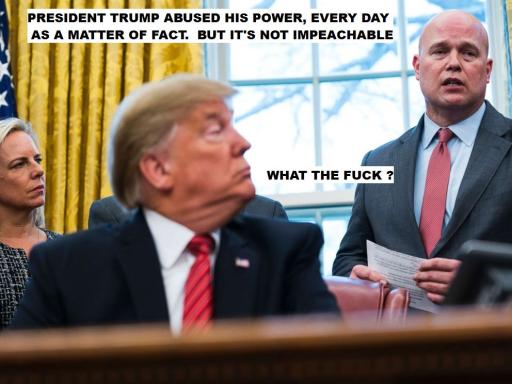 Amazing the lengths some people go to just to defend the asshole, when he would turn on them in a second.

They actually give up their own credibility and dignity. For what exactly...

That idiot was the 'Acting' AG. 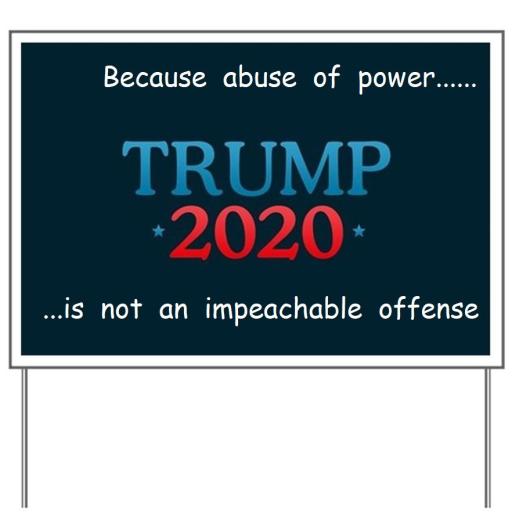 Last time I saw Fester Whitaker on TV I could have sworn he was messed up on dope. He could not even open his damn eyes...

Doesn't have to be a crime to be an impeachable offense.

The guy is a complete dufus. He once applied to be a judge with the statement that he played football. WTH does that have to do with being a judge?