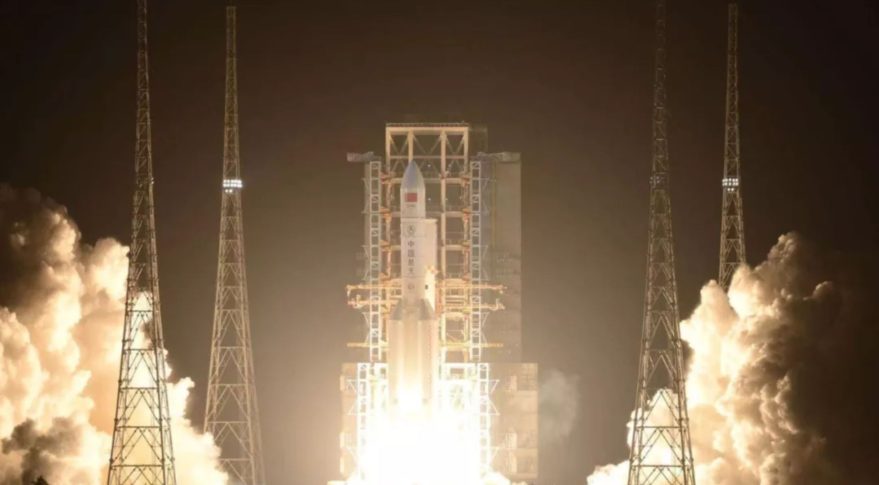 China is clear to proceed with plans for a Mars rover mission, lunar sample return and space station module test flight in 2020 following a successful return-to-flight of the Long March 5 rocket.

HELSINKI — China is clear to embark on ambitious exploration and space station missions following a successful return-to-flight Friday of the Long March 5.

The China Aerospace Science and Technology Corporation (CASC), the state-owned main contractor for the country’s space programs, declared mission success within an hour of launch.

The near 8-metric-ton Shijian-20 is based on the new large DFH-5 communications satellite bus. It will test Q/V band and laser communications.

The nominal launch means China can proceed testing a derivative launcher needed to construct its planned space station and attempt to launch its first independent interplanetary mission — to Mars — in summer 2020. The Chang’e-5 lunar sample return mission is expected to follow late 2020.

Chinese state media have been regularly promoting the country’s major missions planned for 2020, many of which depend on the Long March 5. Another failure would have been a cause of embarrassment for the leadership and likely brought heavy scrutiny upon CASC.

The launch comes over 900 days after the failure of the second Long March 5 mission, in July 2017. The cause of that failure was a faulty oxidizer turbopump which has since been redesigned at least twice.

The Long March 5 is a new generation launch vehicle with close to twice the payload capacity of the most powerful older Chinese rocket, making it crucial to China’s major plans over the next decade. These include missions to Mars, the lunar polar regions, and a solar polar orbit telescope project.

The Long March 5 is capable of delivering 14 metric tons to geostationary transfer orbit and 8.2 tons to trans lunar injection. The derivative Long March 5B will be able to deliver 25 tons to low Earth orbit and is designed to launch modules for the Chinese Space Station.

The Long March 5B could now launch as soon as the first half of 2020 and will be carrying a boilerplate test version of a  new generation crewed spacecraft  for deep space. If this test flight goes well, China will begin preparations for launching its first space station module. The 20-metric-ton ‘Tianhe’ core module was previously slated for launch in 2018 before the 2017 Long March 5 failure.

Preparations for the launch  began in October  with delivery of the rocket components to Wenchang. While most Chinese launchers are delivered by rail, the five-meter-diameter Long March 5 needs to be transported via specially designed cargo ships.

CASC  stated  Jan. 29 that it planned a return-to-flight of the Long March 5 for July. SpaceNews  reported June 21  that the launch was not going to meet this schedule.

A Chinese language article by China Youth Daily published July 26 article stated that a  ‘substantial’ redesign  of the YF-77 turbopump had recently taken place. This included the addition of guide vanes and use of nickel superalloys instead of stainless steel.

Apparent swift progress was made, resulting in the third Long March 5 being delivered to Wenchang late October.

"The Long March 5 is a new generation launch vehicle with close to twice the payload capacity of the most powerful older Chinese rocket, making it crucial to China’s major plans over the next decade. These include missions to Mars, the lunar polar regions, and a solar polar orbit telescope project."

Catching up, maybe one day to surpass.