community » Discussions » Category » The Lighter Side/ Humor » Discussion » Shaggy Dog Stories - Do You Have One To Tell?

By:   Buzz of the Orient 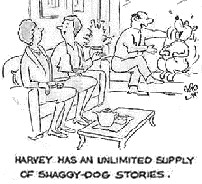 My late best friend used to tell this story: 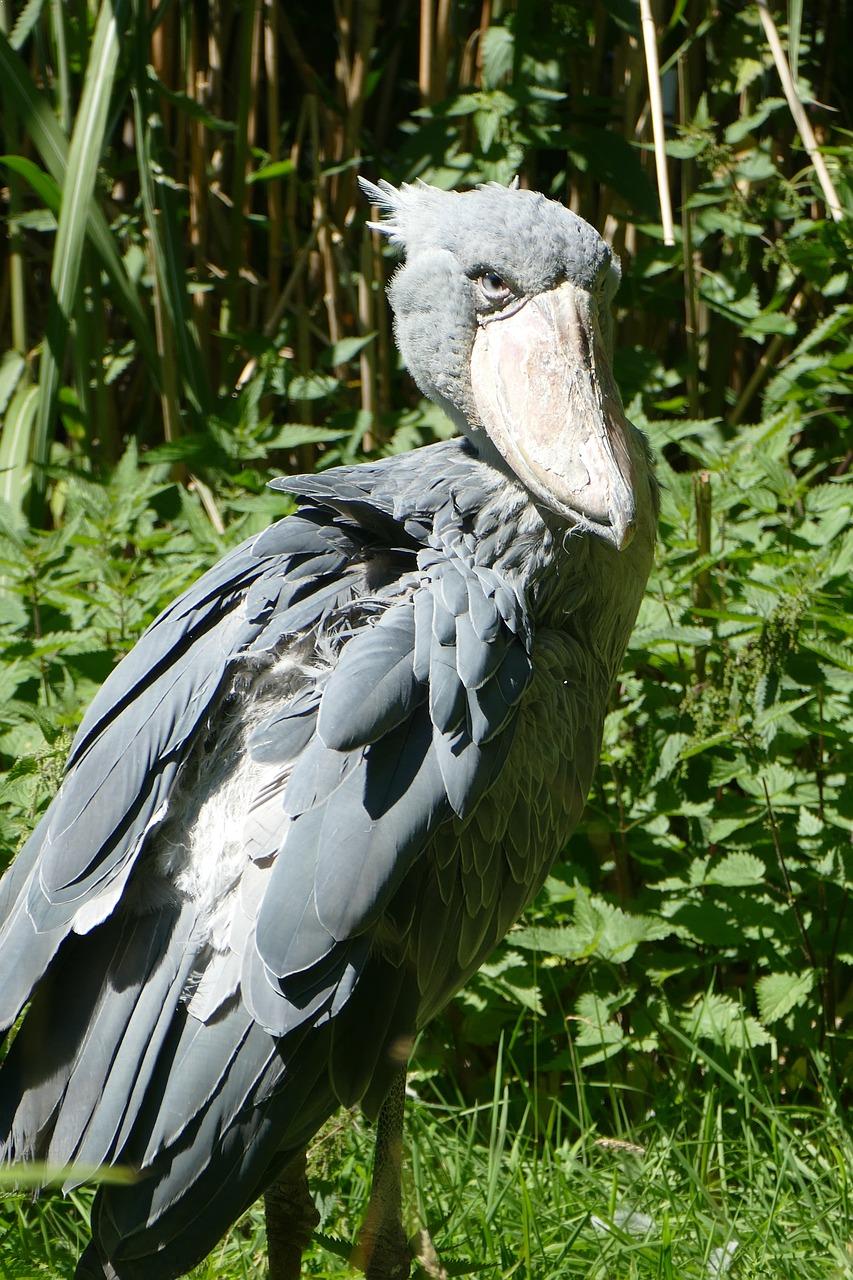 Into the depths of the South American jungles the trio of photographers trekked on their search for the extremely rare endangered Foo Bird. They looked for many hours until finally they heard in the distance the unique call of the Foo Bird: "Foooo! Foooo!", so they hurried along and finally, sitting high up in a tree they saw it, and took photos of it - the Foo Bird, but while taking their photos the bird unloaded a huge gob of shit that landed on their heads and soaked the hair of the three of them.

So they returned to where they had just crossed a river, and two of them scrubbed and washed out their hair, but the third decided it could be healthy for his hair to leave it as is.  They then walked back towards their camp, and while doing so a huge python wrapped itself around one of the ones who washed his hair and gobbled him whole.  Then the python saw the one who did not wash his hair, and slithered as fast as it could into the deep jungle.

The two remaining then continued walking as quickly back towards the camp as they could.  Then a tiger pounced on the other one who washed his hair and tore him to shreds and devoured his flesh.  When the tiger saw the one who didn't wash his hair, it ran as far away from that guy as fast as it could, and so the third photographer, the one who did not wash the Foo shit from his hair arrived back at the camp safe and sound.

What is the moral of the story?

If the Foo shits, wear it.

This was one of my father's favourite stories, that he used to tell well before mobile phones were known. 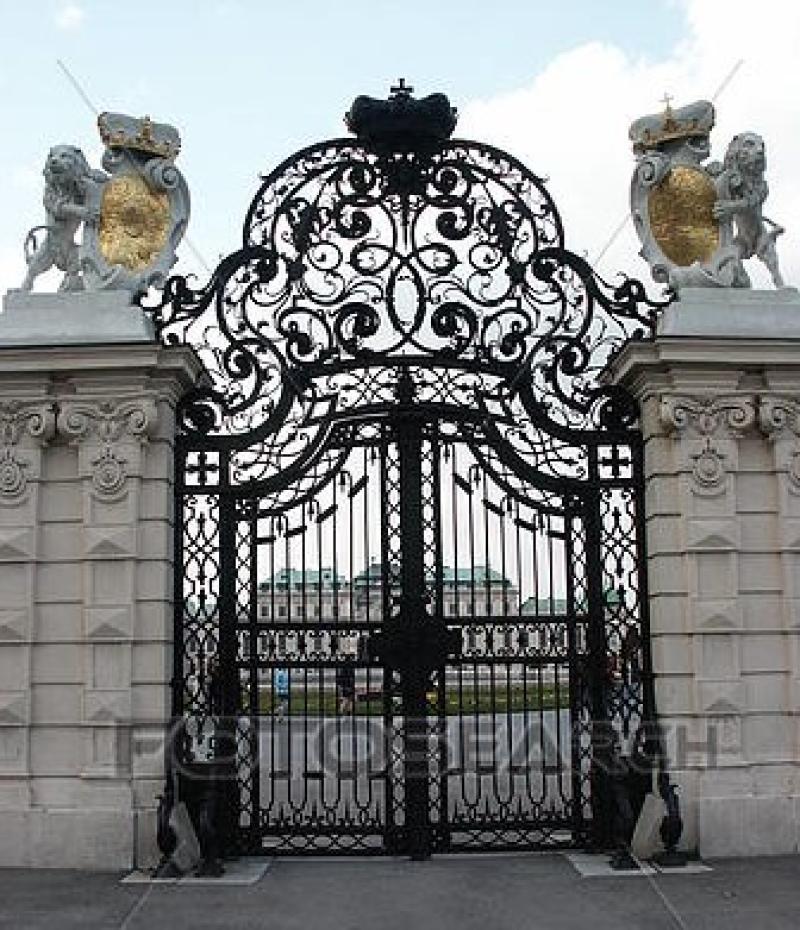 A lawyer was driving through the suburban countryside on his way to a courthouse where he had a trial he had to attend and it was getting close to the time he had to be there.  Just while he was passing by a large older building that was behind high stone walls he got a flat tire and came to a stop at a secure looking iron gate, beside which he saw the sign "Metropolitan Insane Asylum".  He opened the trunk, took out his spare tire and tools, pulled the hub cap off and laid it on the road beside him, unscrewed the nuts and placed them in the hub cap, jacked up the car, pulled the flat tire off and accidentally kicked the hub cap and the nuts all rolled into the sewer.

Then he heard a voice from behind the fence.  "Got a problem, eh buddy?"

"I'll tell you what to do,  Take one nut from each of your other three wheels and use them to mount your tire.  You'll still be able to drive okay."

"Oh, thank you. I never would have thought of that.  Are you staff there?

This one that my brother used to tell might be more accurately described as a shaggy dog story because it's about dogs. Big dog took little dog out for a walk to teach it the facts of dog life.

They came to an outdoor cafe and saw a bone on the ground under a table.  The big dog said "Chew it:"

The little dog chewed it.

Walking back on the street, there was a pretty female Poodle, and the big dog said "Screw it".

And the little dog screwed the poodle.

Still farther was a fire hydrant, and the big dog said "Piss on it."

Then the little dog lifted its leg and pissed on the fire hydrant.

They came to a park and there was this sweet little female Cocker Spaniel, and the big dog said "Screw it."

The little dog did as it was told.

Then next to a picnic table in the park there was some left-over garbage on the ground and in it was a juicy bone.  "Chew it" said the big dog.

And that's what the little dog did.

On the way home they walked past a telephone pole, and the big dog told the little dog "Piss on it."

The little dog did.

What is the moral of the story?

If you can't chew it or you can't screw it, piss on it.

This one's from the internet: 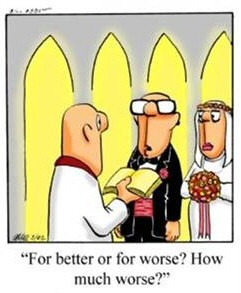 Once upon a time, Clara and Jenny were talking when Clara asks Jenny how many times she's been married, and the reply was 4.

'Four times!' exclaims Clara, 'why so many?'

So Jenny replies, 'Well, I first got married when I was very young, and I married this wonderful man who was a banker.  However, one day just a few weeks after we were married, his bank was robbed and he was shot and killed.'

'Well, it wasn't that tragic. Soon after that, I started seeing another man who performed in the circus.  He was really a great guy, but he lived pretty dangerously because he performed his high-wire act without a net. Well, a few weeks after we got married, he was performing a show and suddenly a gust of wind came by and knocked him off his wire and he was killed.'

'Your second husband was killed too? That's horrible.'

'Yes, it was terrible, but at the funeral I fell in love with the minister and we got married soon after that.  Unfortunately, one Sunday while he was walking to church, he was hit by a car and killed.'

'Three? Three husbands of yours were killed?  How could you live through all that?'

'It was pretty tough, but then I met my present husband. And he's a wonderful man. I think we'll live a long happy life together.'

'And what does your present husband do for a living?' Clara enquires.

'A mortician? I don't understand something here.  First you marry a banker, then a circus performer, then a minister, and now a mortician?  Can you explain such a diverse grouping of husbands?'

Thanks for my morning laugh Buzz.

Apparently you're the only one who enjoyed it.  I didn't have a Shaggy Trump story.