For all of its failures, though, Cats might have the potential for a rare sort of long-term success: It could very well be the next Rocky Horror Picture Show in terms of cult-classic longevity. 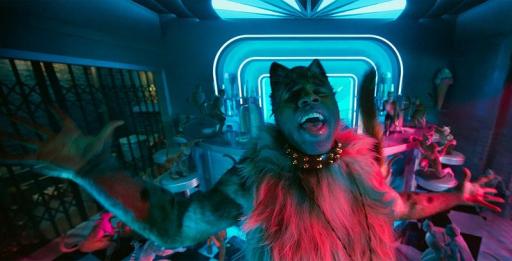 Cats might have been a hit on Broadway in the 1980s and '90s, but the new film adaptation has been, by almost all standards, a catastrophic failure. Its $6.5 million domestic opening weekend wasn't even half of studio projections, disastrous for a major release with a production budget estimated at $100 million.

Cats  is proving just as big a failure with the critics as it is at the box office, with an 18 percent score on Rotten Tomatoes, and some of the harshest review of any movie this year. Its awards season prospects are all but dead, unless producers are targeting the Razzies.

The Academy Awards shortlist for Best Original Song didn't even include "Beautiful Ghosts," although inexplicably the movie's not-even-finished-on-time special effects made the Best Visual Effects shortlist over the likes of  Ad Astra ,  Godzilla: King of the Monsters  and  Pokemon: Detective Pikachu.

For all of its failures, though,  Cats  might have the potential for a rare sort of long-term success: It could very well be the next  Rocky Horror Picture Show  in terms of cult-classic longevity.

Although it's far too early for  Cats  to have developed the formal audience-participation traditions that define showings of  Rocky Horror  or  The Room , screenings of  Cats  are becoming  interesting  experiences for the few who attend. Stories and even videos of some of the best and funniest audience-reaction moments have been going viral on Twitter ever since the movie opened.

In most situations, talking loudly during a movie, let alone getting up to dance or to pull out a phone to film something, is viewed as rude and inappropriate. Cats, however, is not most movies. If anyone going to see it was expecting something they could take seriously, they'd probably leave the theater in disgust by the time Rebel Wilson takes off her skin and eats a humanoid cockroach.

Everyone seeing Cats is at some point going to laugh at it, and these sorts of audience participation moments make the film's unintentional humor into a truly wild experience.

The Alamo Drafthouse has already gotten ahead of the curve by scheduling "rowdy" screenings of Cats in which the theater chain, usually very strict about screening etiquette, allows audience members to let loose (within reason, of course).

For a film that's doing so poorly at the box office otherwise, these screenings seem to be successful, and could be a model for keeping Cats playing in theaters long-term after it's finished its wide release . . .

There was always a pretentiousness about the success of the play CATS.  The thin story is dull, and the music is considered to be among Andrew Lloyd Webber's worst. But it came from a famous literary source (  T.S. Elliot poems) and had that highbrow elitist thing going for it.

When I first saw the movie trailer I thought it looked visually interesting, but the critics have called the movie an atrocity.

Cult movies are cult movies for a reason - they usually suck.

urce (  T.S. Elliot poems) and had that highbrow elitist thing going for it.

When I first saw the movie trailer I thought it looked visually interesting, but the critics have called the movie an atrocity.

Cult movies are cult movies for a reason - they usually suck.

I didn't know too much about it, but obviously it was panned by the critics. However, apparently the one area in which it was considered noteworthy was special effects. That, along with the fact that its so corny, might explain why its attracting the sort of following that The Rocky Horror Picture Show did...

Oh gawd, all we need now is a bunch of people dressing up like cats and going to the midnight show ...... lets do the time warp ....

I dunno-- it might be a positive thing...??? aybe we need something to distract from the horrors of the current political scene...????

Having been to many RHPS midnight shows in my days, i fully accept the potential "therapeutic" benefits.

Thank you for the clarification. Was in a hurry and typed too fast.

Haven't seen it, but will.

Funny all the big names that are in the show, yet that wasn't enough to keep it from flopping.

The same thing happened with Ishtar and Heaven's gate.  They even use HG in director's workshops under...Don't let this happen to you.

I'll never forget the first time I saw the RHPS. Right before the movie started the usher announced to the audience. "You can drink your drink and smoke your smoke just don't make too big of a mess." It was a party.

just don't make too big of a mess

The toilet paper and rice do that well enough! I worked at a movie theater as a teenager, and my manager always said he would quit if we ever screened Rocky Horror because of that.