"The Shining" writer's suggestion that diversity and quality are mutually exclusive was met with scathing disapproval by Ava DuVernay and other artists.

Stephen King appeared to backtrack on his recent comments about "never" considering "diversity in matters of art" after criticism from a number of prominent artists, including Ava DuVernay.

"The Shining" writer on Tuesday weighed in on the controversy that ensued after the Academy of Motion Picture Arts and Sciences nominated a nearly   all-white slate for acting Oscars.

"For me, the diversity issue did not come up," King, who is a voting member of the Academy, wrote on Twitter of his nominations for the best picture, best adapted screenplay and best original screenplay categories. "That said, I would never consider diversity in matters of art. Only quality. It seems to me that to do otherwise would be wrong." 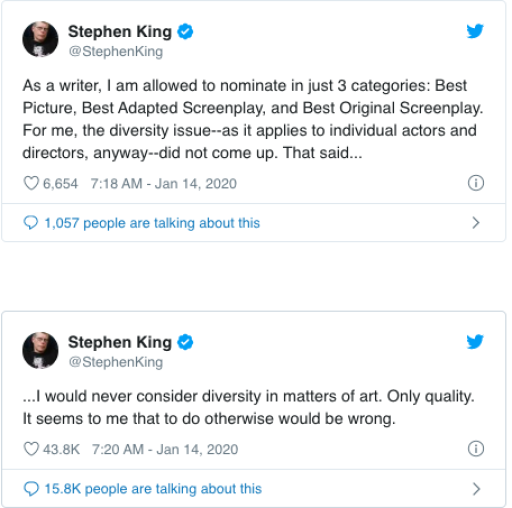 King's remarks were quickly rebuffed, with many criticizing the novelist as being out of touch and "ignorant."

"When you wake up, meditate, stretch, reach for your phone to check on the world and see a tweet from someone you admire that is so backward and ignorant you want to go back to bed," DuVernay, whose docuseries "When They See Us," recently won best limited series at the 2020 Critics Choice Awards.

Roxanne Gay, the award-winning author of "Bad Feminist" and "Hunger," also stated she was disappointed with King's comments.

"As a fan, this is painful to read from you. It implies that diversity and quality cannot be synonymous," Gay tweeted. "They are not separate things. Quality is everywhere but most industries only believe in quality from one demographic."

Sarah Weinman, author of "The Real Lolita: The Kidnapping of Sally Horner and the Novel That Scandalized the World," added that her work and the work of other women crime writers might not exist had the publishing industry not endeavored to highlight writers of different backgrounds.

"'Never considering diversity' is, in fact, making a choice to privilege certain works of art over others," Weinman   tweeted . "WOMEN CRIME WRITERS, a collection I know you have read, would not exist without the specific goal of diversity, in the form of reviving neglected/overlooked writers."


Approximately three hours after King posted his initial comments, he expounded upon his views of the role of diversity in evaluating art. This time he acknowledged that not everyone begins on an even playing field and stated that people cannot win awards if they're "shut of the game."

"The most important thing we can do as artists and creative people is make sure everyone has the same fair shot, regardless of sex, color, or orientation," King   wrote . "Right now such people are badly under-represented, and not only in the arts."

Yet, some were not fully convinced of the sincerity of his second round of comments.

"This is a very strange tweet to make after the previous," one person wrote. "I'm curious how you envision we 'ensure everyone has a fair shot' without ever considering diversity."

Others questioned what King planned to do himself to address the lack of opportunities for artists from diverse backgrounds.

"You could do a lot about this in the publishing world if you wanted to," Rebecca Renner, a novelist and journalist,   added . "Put your money where your mouth is."

It's amusing watching the revolution eat itself. Yesterday's torch carrier gets beaten down by the mob today. What's funny is there doesn't appear to be anyone self aware enough in the liberal twitter mob to realize that its only a matter of time before they mistakenly express a "wrong" opinion and have to be cancelled.

It bums me out he followed up with an apology though. He is one of the top film writers to this day. If I were him I would tell them to stop watching my products if you have a problem with what I say. That's what we conservatives are told anytime we voice concern with the content of movies or shows.

What s amazing is to watch when they make a correct statement like "That said, I would never consider diversity in matters of art. Only quality. It seems to me that to do otherwise would be wrong."

Why would anyone have to back off from that?

Keep it up King. Good on you for keeping quality over conformity. If diversity improves the quality of something, then include it. I'm sick of gratuitous diversity just for sparing people's feelings. Especially in period films where they are completely out of place or the new fad of replacing a traditional character with someone who is a polar opposite. Again it's good to see higher level figures speak out instead of destroy their product.

Funny, in about one day i both gained then lost more respect for him.

Not an easy thing to accomplish so good job Stevie!

I'm sure he'll lose lots of sleep over that.

People on a site like Newstalkers are far too psychologically invested in complaining about "social justice warriors" and political correctness".  Sometimes it seems like the only thing some people talk about. It's nowhere near the all encompassing big deal right wingers make it out to be.

Stevie spoke the truth, got his tit in a ringer with the party faithful for it and then pussed out.   That's all there is to see here.

I saw a couple interesting things in the past few days.  One was a discussion about lack of diversity in the Oscars. The commenters also talked about the British version of the Oscars, the BAFTA awards, which are announced at roughly the same time as the Academy Awards.  The commenters I was listening to mentioned that Denzel Washington has received nine Oscar nominations over his long career. Guess how many BAFTA nominations Denzel has gotten?  Zero. And it's not that his films are not eligible. All the big Hollywood films are also eligible for BAFTA awards.

The second thing I saw in the past few days is a list of the best movies of the 2010's, according to the film critic of the National Review, the conservative magazine. This critic had many of his top 20 movies that were from China, or South America or some foreign country other than the US. Most of 20 best movies of the decade were not in English.

My point?   There are two parts to this - yes art needs to be produced and presented and given awards without regard to ethnic or racial criteria. But there also needs to be a realization that , up until now, people of color have not yet received fair treatment in some cases.

Just keep going and we will get to the goal line.

But there also needs to be a realization that , up until now, people have color have not yet received fair treatment in some cases.

Very much agreed, but it is getting better. Call it out when it's wrong (such as casting John Wayne as Genghis Khan) but don't get so up in arms just because a person of color was not recognized. Hollywood turns out a lot of bad movies so work to recognize quality while also working to insure that all members get equal opportunities.

Alfred Hitchcock never won best director Oscar. Think about cause and remedy. Was it because of the quality of directors he was up against in the years he was nominated or was it discrimination against the obese?

I really didn't read his comment as saying that quality and diversity are mutually exclusive, just that he'd choose quality over diversity.  Given that his movie "Shawshank Redemption" is considered to be a great film, I doubt that he thinks Morgan Freeman did a poor job portraying Red, regardless of skin color.

I have to agree with you Sandy. But here is the issue with social media.

If someone jumps on you, you get flustered. You feel the need to go on the defensive. I think it is just human nature. Frankly, I would have stood my ground and just explained myself a bit more.

Yeah, I guess it's easy for us to defend him, as it's not in the heat of the moment.  Not so easy for him to defend himself, and point out that his words were being misinterpreted.

I can't say I've read everything King has written, but I've read quite a few of his books, and I've never come across anything in them that makes me think he considers minorities and women to be inferior in anything, including their contributions to art and literature.  But some folks are determined to be offended, and if they can't find a reason for it, they'll make one up.

I'm a huge King fan, and I have to say that his minority characters were actually heroes. Like you said, Red, in Shawshank, or Mike Hanlon and his father in "It' or Dick Hallorann in "The Shinning". He also had great regard for Indians and their traditions and many of his tales seek to use Indian stories of what happens when people don't respect their traditions.

This all coming from a guy who grew up in a state where minorities are nearly nonexsistant.

I would hate to live in the public eye. It's like they are looking for things to rip you apart for. 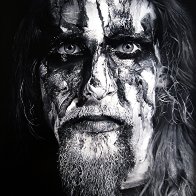 7  Jeremy Retired in NC    one month ago

I've been a Stephen King fan for quite a while.  In his original statement he is 100% correct.  When it comes to art, it's not about diversity.  It's about the art itself.  Backtracking that statement just enables the simple minded in society.