By:   Justin McCurry in Tokyo

The North Korean leader, Kim Jong-un, shed tears as he issued a rare apology for his failure to guide the country through tumultuous times exacerbated by the coronavirus outbreak.

Speaking at a huge military parade held at the weekend to mark the 75th anniversary of the ruling Workers’ party, Kim removed his glasses and wiped away tears – an indication, analysts say, of mounting pressure on his regime.

“Our people have placed trust, as high as the sky and as deep as the sea, in me, but I have failed to always live up to it satisfactorily,” he said, according to a translation of his comments in the Korea Times. “I am really sorry for that.”

Citing his grandfather and father – North Korea’s previous two leaders – Kim continued: “Although I am entrusted with the important responsibility to lead this country upholding the cause of the great comrades Kim Il-sung and Kim Jong-il thanks to the trust of all the people, my efforts and sincerity have not been sufficient enough to rid our people of the difficulties in their lives.”

While the parade in the capital, Pyongyang, featured the expected unveiling of a new intercontinental ballistic missile and other military hardware, analysts said Kim had used a sizeable portion of his speech to sympathize with the North Korean people.

The address was peppered with ominous words such as “grave challenges”, “countless ordeals” and “unprecedented disasters,” according to media accounts.

North Korea has seen trade with China – by far its biggest economic partner – fall dramatically due to the closure of borders in response to the pandemic, although Pyongyang insists it has not recorded a single case of the virus.

Years of international sanctions in response to Kim’s nuclear and missile programmes, plus damage inflicted by natural disasters, have only added to his difficulties.

“It is important to look at why he has come to shed tears at such an occasion,” Hong Min, director of the North Korea division at the Korean Institute for National Unification, told the Korea Times. “Underneath his message, one can sense that Kim is feeling a lot of pressure on his leadership.”

Despite the presence of troops, missiles, tanks and other evidence of North Korea’s growing military might, Kim offered support to people around the world suffering as a result of Covid-19 and voiced hope for an improvement in ties with South Korea.

The South said it was concerned that the parade appeared to have included a new long-range ballistic missile, with the foreign ministry calling on Pyongyang to resume denuclearization talks.

Kim warned in his speech that he would “fully mobilize” his nuclear force if threatened, but avoided direct criticism of Washington.

A US official said it was “disappointing” that North Korea was continuing to prioritize nuclear and ballistic missile development while talks with the US remained deadlocked, and urged Pyongyang to “engage in sustained and substantive negotiations to achieve complete denuclearization”. 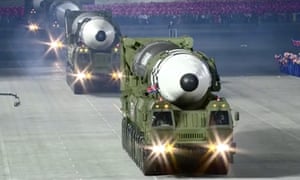 Boo-hoo but look at my pretty shiney new toys?

There probably is a psychological burden imposed on someone who rules as a dictator over an impoverished country subject to deprivation and famine.  He is likely inner conflicted, which only makes him more erratic and dangerous.

He is likely inner conflicted, which only makes him more erratic and dangerous.

He's had no problem murdering family members, and starving his country's citizens.  I'm not sure he has the ability to experience inner turmoil.  However, it is possible that during his lengthy absence, he experienced a medical crisis which lead to changes in his personality.  But that really doesn't mesh with him showing off his shiny new toys that would be capable of unspeakable destruction of life and property.

Well, if you look at the story of The Godfather, Michael Corleone has many people killed too but in the end (of part 2) he is conflicted and a psychological wreck even though he continues on with his criminal empire.

"We'll be completely legitimate in 5 years."

He is lying and trying to tell the people that he feels their pain and is one of them.

It would be like Trump exhibiting any kind of remorse for what he has done to this country, which of course will never, ever happen.