Will We Step Back From The Precipice Or Go Over The Cliff ?

community » Discussions » Category » Op/Ed » Discussion » Will We Step Back From The Precipice Or Go Over The Cliff ?

If Trump wins he is planning a "shock and awe" campaign as regards immigration. This will be his payback to Stephen Miller for all that one's loyalty to Trump over the past 5 years.

We can also expect that one way or another Barack Obama, Hillary Clinton , James Comey, John Brennan , and others will be indicted for something in the ballpark of treason , related to the imaginary plot against Trump supposedly at the hands of the Obama administration plus Clinton. It Trump can't get Bill Barr to do the dirty deed he will fire Barr and install someone into the DOJ who will.  Expect a show trial about mid 2022.

Also fired will be FBI chief Christopher Wray along with all the administration department heads that have hesitated to co-operate with Trump's dictates to transform the government into an arm of Trump's vindictive personality.

Expect Ivanka to become a cabinet secretary, most likely Secretary of State. Trump will want to give her that post, even though she is not remotely qualified for it, because Ivanka was mocked by the world press when she tried to take part in diplomatic chit chat with western nation heavyweights at one of the NATO conferences early in Trump's term. Also , Hillary Clinton was SOS and the Trumps will want to show that Ivanka is better at it.

Don't be too surprised if Don Jr. is given a big governmental post in a second Trump term.  Wilbur Ross is basically a walking corpse so I think Don Jr will be a soon to be Secretary of Commerce.  Don Jr. wants to run for president when the old man moves on, so he needs a high profile position from which to operate.

Jared Kushner will be the bag man who travels around the world collecting the bribes that will be forthcoming to Trump from the weaker totalitarian governments who need protection from their own people. He will remain behind the scenes , as will Stephen Miller and Steve Bannon, who will lay the ideological groundwork for the Supreme Court decision, sometime late in 2023, ruling that President Trump will be given four additional years in office in lieu of the 2024 presidential election because something something Obama something Hillary something Schiff.

Vladimir Putin will give the keynote address at the 2024 Republican-Trump Party convention which will be held at the Trump Doral Golf Resort in Miami Florida.

This article is only very slightly satirical.

Being as I am not stupid, lack even a modicum of intelligence, and still have things left to do yet in my life, I know it is the smarter thing to do is step back from the edge of the pit of Hell.

Plus... I am afraid of heights.

Unfortunately, satire is too often the only harbinger of truth.

Bad things like these , if not these exact things will happen if trump is re-elected. He will openly use the government to make himself and his family richer, and he will put the nepotism into hyperdrive. I also think it is a sure thing that he will try to get his time as president extended past 2024 , assuming he keeps his health.

He must, he is owned by Erdogan---and others.

Oh, one more thing .  Mike Pence will resign and Tucker Carlson will become the new vice president of the United States.  Trump will openly pit Don Jr. and Tucker against one another at cabinet meetings because he likes to see his underlings go after one another.

Laura Ingraham will be named the first Minister of Information and Propaganda in American history.

Be careful what you wish for John. Just kidding.😁

The future is unclear, but Trump will feel emboldened and one thing you can be sure of, he will openly display more nepotism and try to use government to enrich himself, which will be all he will care about. I dont think he would even bother to try and disguise it.

and Tucker Carlson will become the new vice president of the United States.

I thought for sure it would Hannity. He and Trump are butt to butt buds. If Pence resigns, which he should do if he has any intelligence at all, and leaves the VP position open, then Trump will do his best to get Hannity in his place. Tucker Carlson makes too many mistakes in his speaking and would surely embarrass Trump.

And Tucker Carlson can't lie as well as Hannity.

If Trump wins we step back.  If Biden wins we go over the edge.

Step back from what? 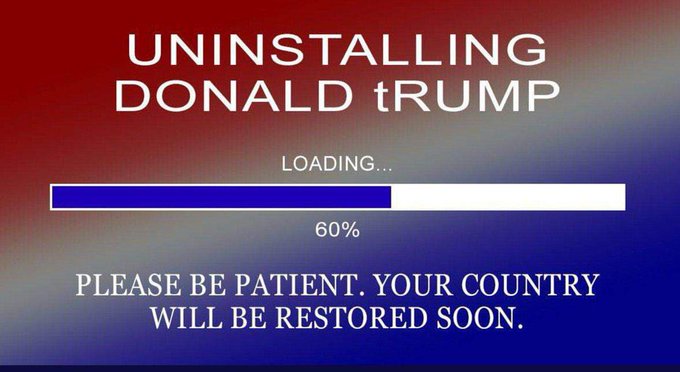 Yet another musical interlude .....