France Is Allowing the State-Sanctioned Murder of Jews | Opinion

To those who authorized Traoré's transfer to a mental institution, who waited three months to interrogate him, who dragged their feet to classify the crime as anti-Semitic, who twice upheld this verdict under an international spotlight, who contorted the law to find Traoré the victim of a psychotic fit, knowing that this determination would nullify the crime and who paved the way for other would-be anti-Semitic murderers to escape justice, I say, J'accuse! Like those complicit in the...

France Is Allowing the State-Sanctioned Murder of Jews | Opinion

There are moments in history when people of good conscience are called upon to speak out in the face of extreme injustice. And rarely are cases of injustice so stark, and their remedy so clear, as when they are perpetrated against a vulnerable minority by the very system meant to protect them. 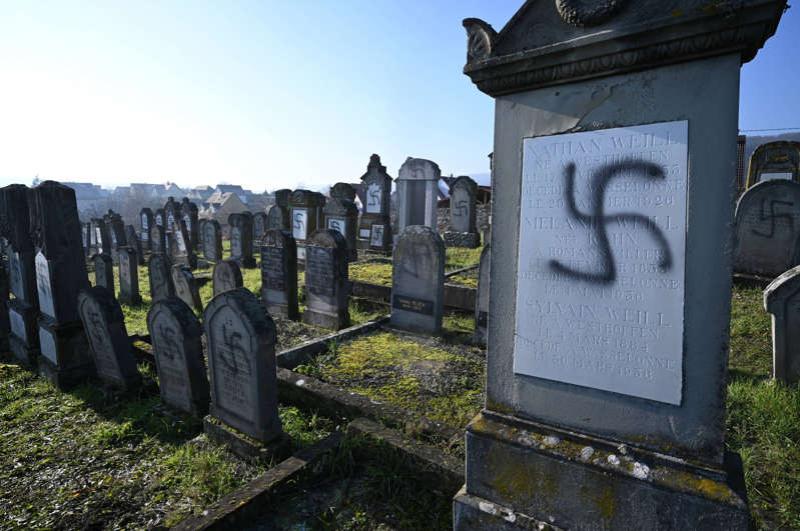 © PATRICK HERTZOG/AFP via Getty Images  This picture taken on December 4, 2019, shows the jewish Westhoffen cemetery near Strasbourg, eastern France, where 107 graves were found vandalised with swastikas and antisemitic inscriptions.

Last week, in passing a ruling which ended a nearly four-year legal saga, the French Republic carried out such a travesty.

In 2017, a 27 year-old man named Kobili Traoré broke into the Paris apartment of his neighbor, a 65 year-old retired physician and kindergarten teacher named Sarah Halimi. Traoré had in the past taunted Halimi, who was the only Jewish resident in her building. On this night, Traoré, who was high on marijuana, beat and stabbed Halimi for over an hour. Witnesses reported that he called her a dirty Jew, called her Satan, chanted Quranic verses, and repeatedly shouted Allahu akbar. The torture ended in murder when he shoved her mangled body off the balcony of her third-floor apartment. When he was questioned for the first time by investigators three months later, Traoré recalled his motive: "I felt persecuted. When I saw the Torah and a chandelier [menorah] in her home, I felt oppressed. I saw her face transforming."

These facts are not in dispute. But last week, the French supreme court upheld a decision that Traoré could not be held criminally responsible and therefore could not even be tried.

The ruling hinged on the determination by a court-appointed panel of psychiatrists that a marijuana-induced psychosis had "destroyed" rather than merely "impaired" Traoré's ability to control his own actions.

This distinction is significant because Article 122-1 of the French criminal code states: "A person is not criminally liable who, when the act was committed, was suffering from a psychological or neuropsychological disorder which destroyed his discernment or his ability to control his actions."

The exception this statute provides for the mentally ill makes sense. For instance, a schizophrenic individual who inadvertently causes harm ought to receive medical treatment and institutional support, not jail time.

On Monday, French President  Emmanuel Macron  suggested the minister of justice should "submit a change in the law as soon as possible." But the problem was not the law; it was its prejudicial application.

The consequences of voluntary intoxication are not a "disorder." And regardless, the court had the capacity to rule that such an episode only caused reduced discernment. Moreover, French law actually treats intoxication as an aggravating circumstance when prosecuting crimes. For example, all else equal, it is well-established that drivers with more than the legal limit of THC in their bloodstream who cause fatal accidents will face harsher penalties than those imposed on sober drivers. The degree of their high is not a consideration.

In this case, though, the court's decision was essentially to treat what is normally an aggravating circumstance as a disqualifying circumstance. The legal gymnastics necessary to reach such a conclusion are a disgrace to the rule of law.

One might interject here that it's alarmist to cry foul; the ruling merely hinged on a lax definition of temporary insanity, rather than on the victim's identity. But in a chillingly parallel case last year in Marseilles, a man who was both drunk and high on cocaine forced his way into his neighbor's apartment. In a fit of anger, he threw the neighbor's dog out of the fourth-floor window, killing the animal. The man, who afterward claimed he had no memory of the event, was not acquitted due to temporary insanity; he was sentenced to two years in prison.

Can you spot the difference?

Article 132-76 of the French criminal code states that penalties are increased when the victim's religious or ethnic identity are a factor in crimes. But reflective of the pervasive denialism of rising anti-Jewish sentiment in France, it took the prosecutor nearly a year to add anti-Semitism to the charges of the Halimi case. Once it was, the anti-Semitic nature of Halimi's murder should have been another aggravating circumstance. Yet in the end, this detail proved immaterial.

A man with no history of mental illness, who had been smoking and dealing marijuana since he was 15, who had previously been imprisoned for other violent crimes, whom the court determined had a history of animus toward Jews, and who even admitted that this animus motivated the murder, was not suffering from temporary insanity due to marijuana. He was suffering from a different ailment. It's called anti-Semitism.

To those who authorized Traoré's transfer to a mental institution, who waited three months to interrogate him, who dragged their feet to classify the crime as anti-Semitic, who twice upheld this verdict under an international spotlight, who contorted the law to find Traoré the victim of a psychotic fit, knowing that this determination would nullify the crime and who paved the way for other would-be anti-Semitic murderers to escape justice, I say,  J ' accuse!

Like those complicit in the infamous wrongful conviction of the French Jewish army captain Alfred Dreyfus more than a century ago, you are the new building blocks of systemic Jew-hatred in 21st-century France.

Shame on you for robbing Sarah Halimi's family of justice, for sacrificing the safety of France's Jewish community rather than face down the problem of Islamist anti-Semitism in your midst, and for forcing us Jews to relive the collective trauma and fear of state-sanctioned murder.

Zach Schapira is executive director of the J'accuse Coalition for Justice.

The views expressed in this article are the writer's own.

Attention French dope smokers, murdering Jews is in season without penalty as long as you smoke a joint first.

I read about this the other day and I couldn’t believe it ! It’s insane. France has taken a hard right turn, it’s bad. They are passing a new law that forbids citizens taking videos of police activity. They are also making protest much more restricted.

i don’t know what’s going on there but I doubt you can blame it on smoking weed.

Among the voters in France, Jews are only one percent of the population whereas Mislims are almost ten percent.  Remember that politicians are whores.

Attention French dope smokers, murdering Jews is in season without penalty as long as you smoke a joint first.

That's the primary conclusion you draw?

I guess I should have put a "/s" after my comment.  I thought it was so obvious it wouldn't have been necessary.

I saw her face transforming

Could someone clarify this from the article? It seems like an incomplete statement or sentence. Transforming into what exactly? Not denying this was a hate crime; but you would think anyone questioning would have followed up on it for clarification? Was it used to help show that he wasn't sane?

Second, how much marijuana does someone have to smoke to go into a drug addled rage for over an hour?

On this night, Traoré, who was high on marijuana, beat and stabbed Halimi for over an hour.

I don't smoke it myself; but have been around people that have been pretty bombed- some that turned violently paranoid. Never seen it last a full hour- they normally crash well before then.

When I read "transformed" I assumed one must use their imagination to consider what a stoned person might  consider hateful.

During my wild hippie weekend days I became quite familiar with persons while they were stoned, and never once did I see a person stoned on marijuana become violent - as it virtually always had the opposite effect.

never once did I see a person stoned on marijuana become violent - as it virtually always had the opposite effect.

For most it mellows them out but I can attest to the fact that violent people retain their violent nature while stoned, they're just lazy from the weed so when they say "don't make me get up" it's not a threat they just really don't want to get up. They may want to hit you but it requires to much effort. I used to smoke weed long ago and while people say pot can make you paranoid I think that's the wrong term, highly self-conscious is a better description of the uncomfortable feeling pot sometimes causes. Coke and Crack users get Paranoid they hide in the house and peek out the windows thinking someone is out to get them (sometimes they're right), Potheads can get Self-Conscious and will be uncomfortable around anyone but their closest friends.

I knew bikers who were normally violent, and when they smoked dope they cooled out.  From my understanding of the murder, the perpetrator was not normally a monster, only "plain old-fashioned antisemitic" (borrowing a line from Schindler's List) and not normally violent - after all how could he be violent?  Surely it wasn't his religion, right?

Crazy or not he's far to dangerous to ever be allowed to walk free. Even in the most cut and dry cases when we know that a person has severe mental problems if they go off their meds and murder someone once they need to be locked up forever if not as punishment then as a precaution. At least with a sane murderer we can assess the likelihood of reoffending but with a guy like this all you can say is "He's fine as long as he doesn't smoke Pot, go off he's Meds, and isn't made to feel Persecuted. The way things are going soon you'll be able to get away with murder by saying " He started giving me shit and I hadn't had my morning Coffee yet".

to the topic - blaming these heinous acts of antisemitism on weed is ridiculous, as is allowing it as a defense.