A Florida man and his three sons were accused in federal court of selling tens of thousands of bottles of bleach that were marketed as a "miracle cure"" for the coronavirus and other illnesses, authorities said.

A Florida man and his three sons were accused in federal court of selling tens of thousands of bottles of bleach that were marketed as a "miracle cure" for the coronavirus and other illnesses, authorities said.

The man, Mark Grenon, and his sons, Jonathan, Jordan and Joseph Grenon, were accused of fraud and violating civil court orders instructing them to stop selling the fake cure, which they promoted as "Miracle Mineral Solution," or MMS, according to documents filed Friday in Florida's southern district.

Investigators carry evidence away from a home that authoritiies said was involved in illegally selling a bleach-like chemical mixture as a miracle cure for the coronavirus and other diseases in Bradenton, Fla., on July 9.WFLA

The Food and Drug Administration has warned people not to ingest the potentially deadly chlorine dioxide solution, which is typically used for industrial water treatment.

Court documents filed in the civil case allege that on a podcast released last year, co-host Mark Grenon referred to the 2nd Amendment and threatened a federal judge over a court order halting the sale of MMS, saying she was committing "treason."

"Do they want a Waco?" he is alleged to have said, referring to the 1993 siege in Texas that left 76 people dead.

According to court documents, the family manufactured the solution in a backyard shed in Bradenton, about 45 miles south of Tampa. Through what the documents describe as an "avowedly" nonreligious church called Genesis II Church of Health and Healing, the solution was marketed and sold as a cure-all for cancer, autism, diabetes and other disorders and diseases, according to the documents.

The family has sold more than 28,000 bottles, earning more than $1 million, the documents say.

During a raid on the Bradenton property, authorities discovered dozens of chemical drums, 10,000 pounds of sodium nitrate and thousands of bottles of the solution, the U.S. attorney's office for southern Florida said in a news release.

Two of the sons — Jonathan and Jordan Grenon — were arrested and are scheduled to be arraigned Monday, the release says.

Mark and Joseph Grenon are in Colombia, the release says. It doesn't provide additional details about their location, and a spokeswoman didn't immediately respond to a request for comment.

It isn't clear whether the family has attorneys. Court records don't list one, and a message sent to Genesis seeking comment wasn't immediately returned.

Unfortunately, this isn't new. The same stuff has been sold as a cure for autism.  Recommended use is as an enema.  Some desperate parents are literally willing to push bleach into their kids' rectums on the say-so of these con artists.  It's awful.

As a parent of a child on the spectrum, knowing he is exceptional, and having to deal with the self-serving examples of those hoping to profit from a complicated diagnosis, makes me rethink my stance as a pacifist.

The absolute worst of the worst.

My first thought was of Erik and Don Jr. setting up something like a lemonade stand trying to sell internal (bleach) disinfectants for COVID. 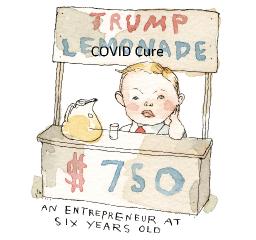 Man are some people dumb, no wonder the majority of stupid people are also broke.

Their sentence should be limiting their liquid intake to the magic elixir they were peddling...they sold it as a cure for cancer, autism, diabetes, and COVID, but it is fatal to opportunists preying upon the uniformed and remarkably incurious.

"The indictment charges each of the Grenons with one count of conspiracy to commit fraud and two counts of criminal contempt.  If convicted, the Grenons face up to life imprisonment. A federal district judge will determine any sentence after considering the U.S. Sentencing Guidelines and other statutory factors."

I actually feel sorry for the people who bought this stuff. I hope no one got seriously ill

Court documents filed in the civil case allege that on a podcast released last year, co-host Mark Grenon referred to the 2nd Amendment and threatened a federal judge over a court order halting the sale of MMS, saying she was committing "treason."

People these days love tossing around the word "treason" for any number of things.  But the sale of product.......?  That's a first.  What the hell... It's Florida.

Too many despicable assholes in this world taking advantage of the far-too-many gullible people in existence.

Morning. No matter what it is, there is always some maggot wanting to make a dollar out of someone else's misery. Hope they cop a decent jail sentence.

Professor Principal
9  Buzz of the Orient    3 weeks ago

I wonder if they paid a commission or royalty to the person who in a TV broadcast promoted the ingredient of their product for them as being a way to cure the virus - surely his endorsement caused thousands of sales.