A faction of conservatives pushes to build its own climate movement

The American Conservation Coalition is trying to build a conservative grassroots climate movement starting with a June 5 rally in Miami.

WASHINGTON — Before he became a climate activist during his freshman year of college, Benji Backer had spoken at the Conservative Political Action Conference, written for right-leaning sites such as TownHall and RedState, and made a name for himself as a conservative commentator on television.

But like many other young people, he worried about climate change and didn't see a place for himself in either the conservative movement, which mostly ignores or denies climate change, or the environmental movement, in which major institutes like the Sierra Club tend to align with Democrats.

So in 2017, Backer founded the American Conservation Coalition, which next month is hosting what it bills as the first conservative climate rally.

"We want to plant a flagpole in the sand to say, this is an issue conservatives can and should lead on," he said. "There is absolutely zero path to a zero emissions, climate change-free future without bipartisanship — and anybody who doesn't accept that isn't taking this seriously."

The group has grown to more than 220 branches, many of which are on college campuses, with thousands of grassroots members and relationships on Capitol Hill.

The June 5 rally in Miami, a city that could wind up underwater if sea levels continue to rise, will feature like-minded Republicans such as Florida's former Rep. Carlos Curbelo and Miami Mayor Francis Suarez, who has integrated climate adaptation into all of the city's long-term planning.

Backer and others say the partisan divide on climate is starting to narrow as people feel the effects of a warming climate and thanks to a rising generation of millennial and Gen Z voters who are far more likely than older Republicans to say human-caused climate change is real and that the government needs to do more about it.

Outside the left, many who care about the environment are turned off by what they view as the hectoring rhetoric of climate activists, Backer said.

"You have all these groups on the left, and then no groups on the right. That's the market gap that we fit," he said. "We are really the first and only grassroots movement in this space."

Focusing on more optimistic messages of innovation and local solutions can bring new people into the fold, he said, pointing to billionaire Elon Musk as an example of someone being rewarded in the market while reducing carbon emissions by popularizing electric vehicles.

In rural America, there's a long history of conservation among hunters and fishermen, going back to former President Theodore Roosevelt, a Republican sportsman who founded the national park system, who now feel alienated by the culture of environmentalism and its often abstract goals.

"There are so many parts of this country that could be brought in if you can just make it about their backyards, something they can have personal buy-in," said Backer, who spent much of last year on a cross-country road trip in a Tesla speaking with local groups. "And with climate change, that's really easy to do that because it's going to affect every community in this country."

On Capitol Hill, a cohort of mostly young Republican members of Congress are pushing the party from the inside and House Minority Leader Kevin McCarthy, despite some uneasiness on his right, just released his own climate plan.

"This shouldn't be a partisan issue and it should be something that we can find sensible common ground on," said Rep. Peter Meijer, R-Mich., a 33-year-old who thinks Republicans can champion a free market approach to climate solutions, told NBC News. "But that requires the Democratic Party to not greenwash economic redistribution efforts and it requires the Republican Party to stop denialism."

The American Conservation Coalition has faced predictable criticisms from the left and the right, but has overlapping membership with both youth conservative groups like Turning Point USA and relationships with less politicized environmental groups, like the Nature Conservancy.

The group chose Miami for its first rally because it views Florida as an example of conservative leadership on climate.

Florida Gov. Ron DeSantis, a loyalist of former President Donald Trump who is eyeing his own 2024 presidential run, just signed legislation to prepare the state for rising sea levels and more severe storms that won overwhelming support in the GOP-controlled Legislature.

DeSantis notably did not talk much about climate change around the bill, nor does it address carbon emissions, but that may have helped depolarize the issue.

"We can debate all day the whys and how this happens," Florida House Speaker Chris Sprowls, a Republican, said in response to Democratic criticism that it didn't go far enough, "but if we just do that and we just debated all day, we wouldn't do anything."

Professor Principal
1  Buzz of the Orient    3 weeks ago

Now, if the PRINCIPLED Republican Senators and Congress members would split from the Trumpster ones, THAT would be something, but unfortunately it's just wishful thinking on my part.

Get a grip Benji...... You're talking about conservatives that are so narrow minded, that their "memo to self" notepads are only an inch wide.

Conservation is key.  Trying to electrify everything, at best, will only change the problem and not make it go away.

In all fields of human endeavor the answer to a question poses a new question ... in the world of ideas this is having your cake and eating it too. Conservation is but one tool in a box of many, it is not a panacea.

They will not address overpopulation which is the root cause

Not enough decline, we are still way overpopulated

But overall population continues to grow. We're nearing 8 billion now. We could possibly reach almost 10 billion by 2050. According to Stanford University, the optimum human population for Earth is approximately 2 billion people. Other estimates place the high end of optimal population at 5 billion.

Nothing can really be done about climate change except talk about it.

It remains unclear what exact effects the very slightly increased amount of "greenhouse" gases is having to modify these natural cycles.

Then how do you explain this, Greg? 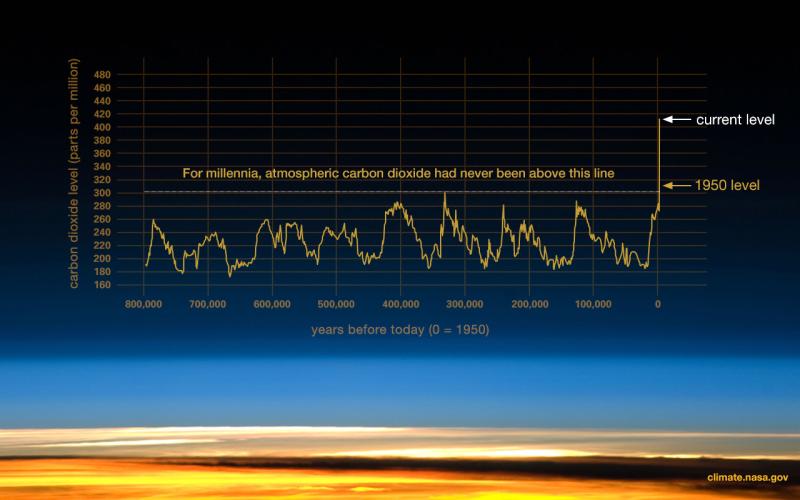 Nothing can really be done about climate change except talk about it.

Or...we can take steps to reduce our emissions, pollution, and consumption while researching, developing, and promoting cleaner alternatives. It may not reverse climate change entirely. But it can help mitigate it and its effect.

We're in the Halocene Period and during this period, the climate has been relatively stable. We're seeing a warming trend now, compared to previous decades, because of manmade activities and impact on the environment.

It remains unclear what exact effects the very slightly increased amount of "greenhouse" gases is having to modify these natural cycles.

I welcome this. Conservatives and liberals used to agree on a lot more things than they do now. The business of politics seems like it’s more about disagreeing with whatever the other side proposes - even if it used to be something you endorsed - rather than moving forward over common ground.

The environment and conservation seem like things everyone can and should care about, but extremism poisons the conversation. For extreme conservatives, all regulations are bad. And for extreme progressives, no regulation is bad. There is no sensible middle ground.

For example, I appreciate that regulations can be frustrating, but I would imagine that any conservative - political or social - would clean up after picnicking or camping. So why wouldn’t you expect a manufacturer to handle its waste in a way that doesn’t poison the environment? Being a good steward of the environment is a biblical teaching.

On the other hand, some regulations go too far. They completely cripple human endeavor whether it’s a large corporation, a farmer, or a homeowner. The regulations may not even do anything to actually solve the problem they purport to address. We need rules that protect the environment, but they need to be sensible and logical. I can’t remember the last time someone on the Left suggested we go through the existing regulations and try to get rid of bad ones or just make them more efficient, if less intrusive.