By:   Brett Bundale - The Canadian Press 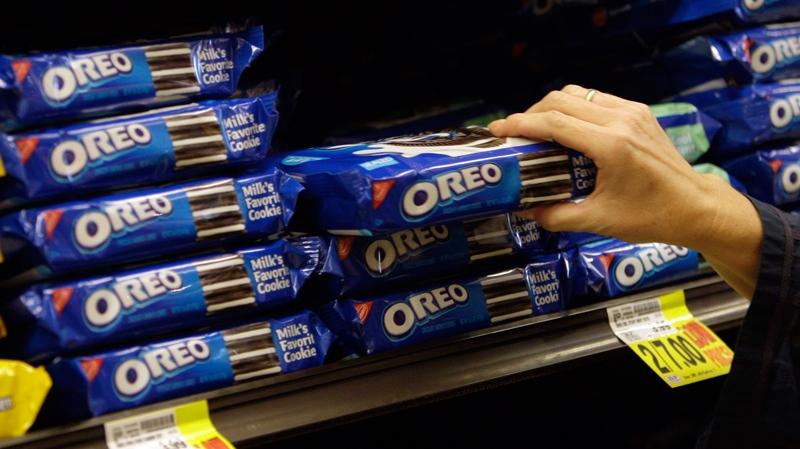 In this Feb. 9, 2011, file photo, a shopper selects Oreo cookies by Nabisco, which is part of the Kraft Foods Inc. family of brands and products, at a supermarket in Los Angeles. (AP Photo/File)

As increasing commodity prices, higher shipping fees and labour shortages drive up costs for food manufacturers, experts say reducing the amount of food in a package is a subtle way to adjust for inflation without raising prices.

"They want to remain competitive in an inflationary market, and in order to do that they play around with quantities instead of charging more for products."

The shrinking-package strategy ultimately leaves consumers with less for their money for everything from cookies and chips to cheese and orange juice.

An original package of Oreo cookies, for example, has shrunk by about three cookies to 270 grams from 303 grams, a roughly 10 per cent reduction by weight.

A spokesman for Mondelez Canada Inc., which makes the iconic cookie brand, said the company reduced the size of some Oreo packages earlier this year.

"It's important to note that this change was a result of several factors, most significantly higher commodity costs which have been a challenge across the industry for some time," Noah Farber said in an email.

"We work hard to ensure we offer value for money for our consumers, but we will never compromise on the taste or quality of Oreo which is loved by millions of consumers around the world."

Consumers may also notice fewer chips in a bag, crackers in a box or granola bars in a package. A bag of Lay's potato chips now weighs 165 grams, down from 180 grams, Quaker Chewy granola bars come with five bars rather than six or 120 grams instead of 156 grams, and Armstrong cheese is 600 grams rather than 700 grams, according to data compiled by Charlebois.

Food producers have also redesigned orange juice bottles to create a larger hollow bubble of space on the bottom, giving consumers the impression that the bottle is the same size while in fact reducing the amount of juice, he said.

"It is subtle because they do alter the packages," he said. "It gives you the illusion that you're actually buying the same amount for the same price but you're not."

But Charlebois said the price per 100 grams or 100 millilitres is disclosed to consumers in grocery stores, and that shrinking package sizes might have a positive impact on food waste.

"My biggest concern with shrinkflation is how we track food inflation rates in Canada," he said, noting that we might be underestimating food inflation if shrinking package sizes aren't accounted for.

Statistics Canada said its consumer price index compares the cost of a fixed basket of goods and services over time. The federal agency said its commodity specialists are able to do a quantity adjustment that accounts for changes in package size to ensure price increases are reflected in CPI.

A spokesperson with the Food, Health & Consumer Products of Canada, an industry group representing food manufacturers in Canada, was unavailable for an interview.

This report by The Canadian Press was first published Sept. 2, 2021

Professor Principal
1  seeder  Buzz of the Orient    8 months ago

Very sneaky.  I'm sure most shoppers remember and check the price, but not the contents volume/weight so they don't realize that they are actually paying the same for a lesser amount than previously   I recall something similar from years ago when the diameter of the core tube of toilet paper and paper towels was increased, so that the product appeared to be the same size as before, but it was less in total.

Remember when Ice Cream was sold in 1/2 gallon packages ? I still get pissed off every time I buy a four pound bag of sugar. What's next 7/8ths of a gallon of Milk ? My Mother used to complain about the Tuna can shrinkage because she had recipes that called for 1 or 2 cans but when the cans shrunk the rest of the ingredients had to be adjusted.

This has been going on for at least 20 years, although I assume the examples grow more widespread all the time.