community » Discussions » Category » Entertainment » Discussion » Shaq Blasts Celebrities, Renounces His Status as One: ‘These People Are Out of Their Freaking Minds’

“These celebrities are going freaking crazy and I don’t want to be one, I denounce my celebrity-ness today,” O’Neal told the New York Post. “I’m done with it.”

Shaquille O’Neal   is a massive celebrity, in size and status, but the 7-foot-1 giant is begging everyone to stop considering him one.

“These celebrities are going freaking crazy and I don’t want to be one, I denounce my celebrity-ness today,” O’Neal told the   New York Post . “I’m done with it.”

Shaq was a celebrity during his 19-year NBA career of playing basketball like a real-life superhero, and his fame has not diminished since retiring. The Hall-of-Famer remains relevant with movie appearances and   covering the NBA   alongside   Charles Barkley ,   Kenny Smith   and   Ernie Johnson   on TNT.

O’Neal bashed celebrities during his interview with The Post, in which he was promoting his new campaign with Kellogg’s. An endorsement deal fit for a celebrity, just don’t tell Shaq that.

“Celebrities are crazy,” O’Neal ranted. “I don’t want to be in that category. They are, they’re going freaking insane.. Don’t call me that anymore. These people are out of their freaking mind with how they treat people, what they do, what they say. That’s never been me. I never want to be looked at like that.”

Shaq told   The Post   that he tries to do at least two random acts of kindness per week. Some of those kind gestures have gone viral in the past, with O’Neal notably paying for a stranger’s   engagement ring   earlier this year.

“When they talk about Shaq, say ‘he’s a nice guy’…I want people to say ‘bro he’s nice, he didn’t have an entourage,'” O’Neal explained.

I have never understood "celebrity". I like certain actors, or actresses, certain athletes, , but I dont care what they do in their private time  or buy a brand of cereal or beer because a celebrity recommends it. Thats sounds completely crazy to me.

But what is it about most people that they are impressed by celebrities?  Has there been a study about it?  I'll admit I was kind of thrilled to have met Princess Diana, who shook my hand and carried on a short coversation with me.  Does that make me weak-minded?

I'll admit I was kind of thrilled to have met Princess Diana, who shook my hand and carried on a short coversation with me

What was the short coversation?

Buzz; "How nice to meet you" Princess Diana; "Get out of my way"

What a MEAN comment, in fact I'd say it was a JEALOUS one.  We were given a lesson in Royal Protocol before she came, and we were told that we do not open conversation with her, but reply when she speaks to us, and we wait for her to offer her hand before we shake it.

On a visit to Toronto, Princess Diana visited a school for disabled children.  At the time I was the Chief Barker (president) of the Variety Club of Ontario, a chapter of the international charity, Variety Clubs International.  We raised funds and supported disabled and disadvantaged children by running permanent bingo halls, annual telethons, sold "gold" heart pins, and we provided support for this particular school, and provided it with a wheelchair van, called a "Sunshine Coach", so I was invited to attend to meet her.

She was making the rounds of the senior staff and school board executive, noticed me and walked across the floor to me, and asked me what my duties were at the school.  I told her I was the Chief Barker of the local Variety Club and that we provided financial support and a "Sunshine Coach" to the school.  In London, England, there is a major chapter of our international organization, and it provides multiple "Sunshine Coaches" there, so she was familiar with them as they are very decorated and boldly marked "Variety Sunshine Coach".  So she was familiar with the charity, and also with its coaches.  She said "Oh yes, I noticed your coach outside."  We said a couple more things that I don't remember, and she walked on.  I could kill the photographer who DIDN'T take a picture of us together, but here is one taken at the occasion, in which I am on the right hand side, with a white card on my lapel.   Being so close to her, I have to say that she was more beautiful than any photos I've ever seen of her. 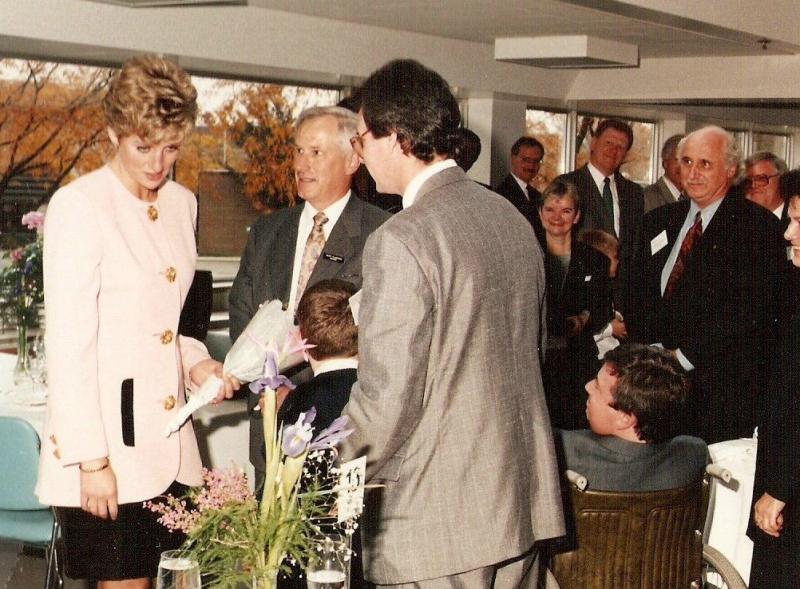 That was a mean comment. I'm glad you got to meet and speak with her. She always came across as a warm and compassionate person

Lighten up Buzzy, it was said in jest.

It was a "put-down" no matter what YOU say it was.  And nobody has called me by my "high school" name since I was in high school, in case you meant it as a FURTHER put down.

I don't know, I guess so.  What commercial, what brand, doesn't he shill for?

I have to admit I like Shaq more after reading this article. My usual stance is Celebrity's would be better off keeping their opinions to themselves but Shaq's opinion on this matter is dead on.

Yeah, I agree with you on that.

I always did like Shaq because I never thought he took himself too seriously. Now I like him even more

Too late Shaq.  You are a celebrity with a big heart and the rare ability to laugh at yourself.  You are the kind of celebrity we need, not the self entitled ones who make everything about themselves.

The girl whose mother went to jail for scheming to get her into college by lying about her athletic ability is now a contestant on Dancing With The Stars. She calls herself Olivia Jade and lists her occupation as an "influencer".  I pity the poor sheep who listen to her "influence."  This is what they call being famous for being famous. She 's a 21 year old , or so, who acts like she is "all that". Its just ego and self-regard.

You are referring to Lori Laughlin.  Her spoiled self entitled daughter even is on video stating that she is only at college to party.  Meanwhile another applicant is denied her spot that probably worked hard in the hopes of admittance.

Being a celebrity is just being famous. Celebrities are like politicians... there are good and there are bad. Okay, that was a very bad analogy as there might actually be some good celebrities.

I think Shaq was referring to "freaking crazy" celebrities.

I used to meet a lot of celebrities where I worked and most of them were the nicest people around.  My favorite was Matt LeBlanc from Friends.