"Dwight Eisenhower was a 'dedicated, conscious agent of the communist conspiracy' "

Politicians' lies are not new.

The capacity to distribute them is.

“Vaccination,” declared a featured speaker at last weekend’s Conservative Political Action Conference, “is the most monstrously conceived and dangerous communist plot we have ever had to face.” The crowd cheered.

Oh, wait. That wasn’t a speech at CPAC; it’s a line uttered by General Jack D. Ripper in the Stanley Kubrick movie “Dr. Strangelove,” and it was about water fluoridation, not Covid vaccines. (Anti-fluoridation conspiracy theories were a real thing in the 1950s and 1960s.) But Ripper’s line wasn’t much different from the content of many actual CPAC speeches. 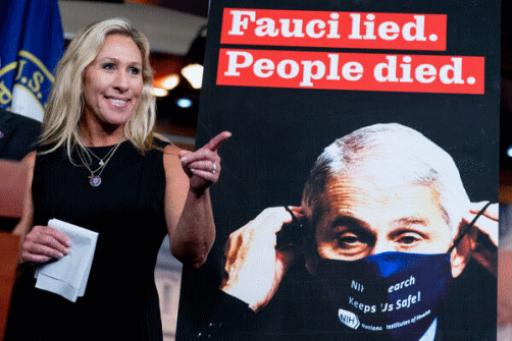 The point is that the madness we’re now seeing on the right is, in one sense, nothing new. Richard Hofstadter wrote a famous 1964 essay titled “The Paranoid Style in American Politics,” tracing McCarthyism all the way back to the 18th-century panic over the Bavarian Illuminati. As he documented, there has always been a streak in our political psychology that sees elite institutions, from government to education, as secret fronts for a vast global conspiracy.

Representative Marjorie Taylor Greene, Republican of Georgia, at a news conference in June about her bill to audit the correspondence and financial statements of Dr. Anthony Fauci.
Andrew Harnik/Associated Press

So if you marvel over Ronny Jackson, the former White House physician, declaring that the Democratic Party of Joe Biden — Joe Biden! — is “socialist Communist Marxist,” remember that Robert Welch, founder of the John Birch Society, insisted that Dwight Eisenhower was a “dedicated, conscious agent of the communist conspiracy.” And while the Birchers were a fringe faction, they weren’t as fringy as all that; if they had been, William F. Buckley wouldn’t have felt compelled to spend time trying to excommunicate them from the conservative movement.

What’s different now, of course, is that bizarre conspiracy theories have become totally mainstream on the right. These days you’re excommunicated from the Republican Party if you don’t embrace the Big Lie that the election was stolen, don’t denounce modestly center-left Democrats as the second coming of Stalin and, increasingly, don’t declare that mask mandates are the equivalent of the Holocaust and vaccines are a globalist plot to achieve mind control.

How did that happen?

Most of what I’ve read emphasizes real changes in American society that have put defenders of traditional order on edge. Our economic center of gravity has shifted away from rural America to big metropolitan areas. Racial diversity has increased, as has social tolerance; religiosity, especially the strength of the white evangelical movement, has declined; we had a Black president. What we’re seeing, the story goes, is a backlash against these changes.

And all of these points probably have some validity. But watching things play out, especially since the Jan. 6 putsch, makes me wonder whether we’re overthinking this. How much of what’s going on is simply group dynamics that have given pre-existing craziness license to express itself?

Put it this way: Surely there was always a significant faction of Americans willing to believe in dark conspiracy theories. But they were restrained by a conservative political establishment that considered conspiracy theorizing bad politics and, not incidentally, bad for business. So people who might have been inclined to spout Bircher-type rhetoric weren’t just excluded from power; they were inhibited in their willingness to state their views because it would have been bad for their careers.

Then came the elections first of Barack Obama, then of Donald Trump. Neither election changed the fundamentals of American society very much — but they changed things enough to produce a sort of tipping point, giving political paranoia the critical mass it had previously lacked. The crazies no longer felt the need to moderate their tone; on the contrary, they began a sort of arms race, in which they competed to out-crazy one another.

And as far as the incentive to hide one’s true views is concerned, the upper hand is now on the other foot. These days it’s the sane Republicans who have to adopt protective camouflage, pretending to share the dominant paranoia (and perhaps, people being what they are, starting to believe the crazy themselves).

The result has been a remarkable, and horrifying, transformation of American politics. One of our major political parties has, quite simply, gone mad. This madness will kill thousands of Americans in the next few months, because politics is by far the best predictor of who is still refusing to get vaccinated. But Covid deaths may be only the beginning of the deadly effects of the triumph of the paranoid style.

I dont understand why all this happened but I know how.

The advent of Rush Limbaugh on the national scene around 1990 , and his meteoric success, led to a gradual flood of right wing media that eventually became a relative tsunami with the coming of broadband internet around the turn of the century. Add in a black man with a foreign sounding name wanting to be president and conspiracy theories started coming out of the woodwork. Conservative media made billions spreading them.

Media moguls' greed played a big part in "how". I assume that by "why", you mean the psychological mechanisms of the TrumpTrueBelievers... I too am flummoxed. I've been collecting theories since 2016...