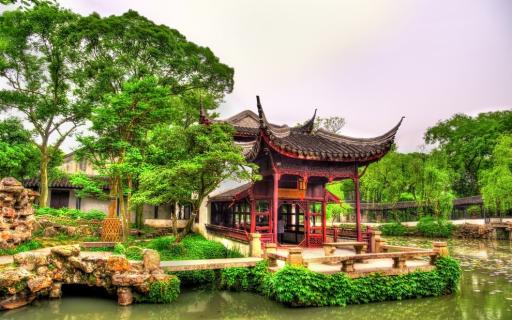 Humble Administrator's Garden is one of the most famous of the gardens of Suzhou. (Photo: Leonid Andronov/Shutterstock)

More than 2,600 years ago in an area west of current-day Shanghai, the city of Suzhou was the capital of the Wu Kingdom and home to several royal hunting gardens and classical gardens. During the fourth century B.C., private gardens became popular and remained so until the 18th century. More than 50 gardens still exist today. However, nine of them are protected as a UNESCO World Heritage site .

Filled with luscious plants, vibrant flowers, elaborate rock formations and tranquil ponds, these gardens reflect microcosms of the natural world. Similar to a traditional Chinese landscape painting, they represent how the Chinese diligently and artfully blended nature into an urban environment.

So, why did these nine gardens receive UNESCO World Heritage protections?

According to the organization's website, "classical Suzhou gardens are intended to be a microcosm of the natural world, incorporating basic elements such as water, stones, plants, and various types of buildings of literary and poetic significance. These exquisite gardens are a testament to the superior craftsmanship of the garden masters of the time. These unique designs that have been inspired but are not limited by concepts of nature have had profound influence on the evolution of both Eastern and Western garden art. These garden ensembles of buildings, rock formations, calligraphy, furniture, and decorative artistic pieces serve as showcases of the paramount artistic achievements of the East Yangtze Delta region; they are in essence the embodiment of the connotations of traditional Chinese culture."

The Humble Administrator's Garden (pictured above) is the largest garden in the group. The garden was constructed in the 1500s and occupies 13 acres with pavilions and bridges on islands separated by ponds. It's divided into three sections — Eastern, Central and Western Gardens — and many scholars consider this garden to be a prime example of Chinese classical garden design.

The Lingering Garden is the second largest one and was first built in the 16th century by Xu Shitai, an imperial official. It was abandoned for a period of time until it was purchased in 1873, refurbished and expanded. Four sections are connected by a covered corridor where tourists can see calligraphy carved into the stone. The most striking element throughout the garden are intricately designed rock formations — some are more than 20 feet tall.

Originally called Ten Thousand Volume Hall, the Master of the Nets Garden was built in 1140 by Shi Zhengzhi , a government official who was inspired by a fisherman's way of life filled with solitude and quiet reflection.

After Zhengzhi's death, the garden fell into disrepair until the 18th century when Song Zongyuan, a retired government official, purchased the land. He renamed it Master of the Nets Garden and constructed additional buildings. The garden would have several private owners through the next couple centuries until it was donated to the government in 1958.

Dating back to the Jin Dynasty (265-420 B.C.), the land that now houses the Mountain Villa with Embracing Beauty garden was originally the site of a house that the education minister and his brother donated to become a Jingde temple. The land became a garden during the 16th century and was expanded two centuries later when the site was excavated. While digging nearly a meter deep into the ground, a spring emerged and was constructed into a pond called Flying Snow.

During the 19th century, a man-made mountain and interconnected pavilions were added. The pavilions were designed in such a way that no matter where someone stands in the garden, they will see all the pavilions at different heights, giving the illusion that the quaint garden is much larger than it really is.

The Canglang Pavilion stands apart from the rest because the central focus isn't a lake or pond but instead a fake "mountain." It was built during the 12th century by a Song Dynasty poet and is the oldest garden of the nine UNESCO gardens.

Bamboo, weeping willows and a variety of ancient trees can be found throughout the pavilion along with more than 100 "windows" that look out from the garden's interior.

The Lion Grove Garden is most famous for its grotto and got its name because the rock formations look like lions. The garden was built in the 14th century by a Zen Buddhist monk in honor of his teacher and was part of a monastery. The garden's name also refers to Lion Peak on Mount Tianmu where the monk's teacher, Abbot Zhongfeng, achieved nirvana.

The massive grotto contains a labyrinth of nine paths that cut through 21 mazes on three levels. Waterfalls and ponds are partially concealed by flowers that grow in the shallow waters like the lotus flowers pictured here.

The Garden of Cultivation was first built in 1541 and was later purchased in 1621 by Wen Zhenheng, grandson of Wen Zhengming who designed the Humble Administrator's Garden. While the garden may be one of the smallest in Suzhou, it houses the largest waterside pavilion.

A lotus pond is the central focal point and is surrounded by pavilions and mountain scenery.

In 1874, a couple purchased a garden and renamed it Couple's Retreat Garden. A residential building sits in the middle of the garden and is surrounded by canals and artificial mountains — creating a romantic oasis.

The garden also contains several other buildings, a fruit orchard and a grotto.

Located in the waterside village of Tongli on the outskirts of Suzhou, the Retreat and Reflection Garden was designed in the late 19th century by Ren Lansheng, a dishonorably discharged imperial service official. Lansheng wanted a quiet place to meditate and reflect on his failings.

A residence, tea hall and gardens winding through corridors make up the one-acre garden. The pavilions give the illusion that they are floating on water.

All of these gardens are open to the public.

Professor Principal
1  seeder  Buzz of the Orient    4 years ago

My wife and I have been to Suzhou, but the only garden we ventured through was the Humble Administrator's Garden (the first one pictured).  We spent a day and a night there, on our way to Shanghai, which is only about 3/4 of an hour away on the super fast train.  Suzhou is called the Venice of China, because of its canals that go through the city, and I took most of my photos during the evening cruise through the canals.  The next photo-essay I post will be of Suzhou.

Humble Administrator's Garden, you have to love the name.

What a great essay Buzz. The Gardens are magnificent to say the least. I imagine one could spend days there admiring them and never grow tired of the beauty.

I can't take credit for it, this is a seed from Mother Nature Network.  However, I am just now posting a photo-essay of the trip we took to Suzhou.  To check out MY photo-essay of Suzhou, click this link:

Another very pleasant stroll, enriched by the text.