Wishing Everyone a Happy Memorial Day Weekend From California!

View of the sunset from a safe social distance

Enjoyed a great BBQ outdoors with friends and family, remembering those who have fought and sacrificed for our freedom!   Thank you to all of our military families and first responders for all that you and your loved ones do in the service of others!   Stay safe and healthy this Memorial Day Weekend!

Bigger version of this picture 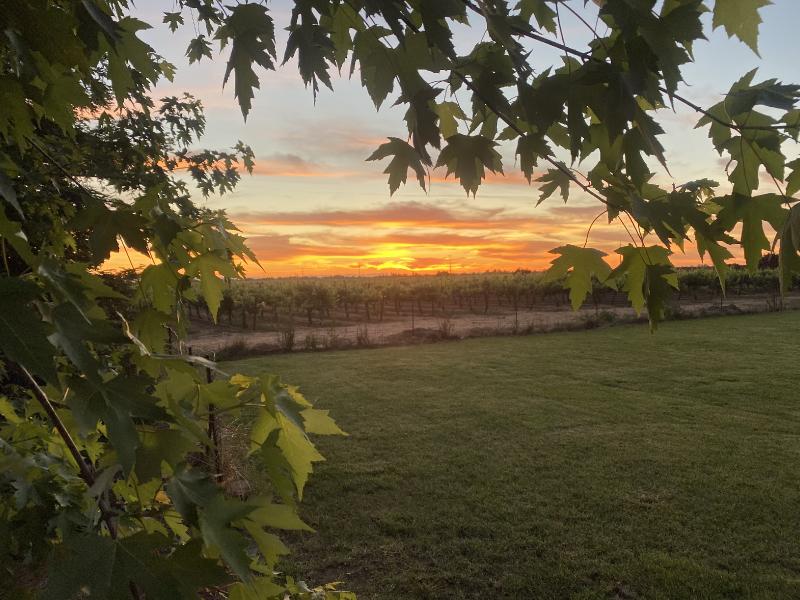 We had a lovely day. It was my father in law's 92nd birthday and we had a BBQ with my sister in law. It was really nice.

That is great Perrie!  Happy Memorial Day my friend!  This is a shot from the backyard of my sister-in-laws house.  One thing I love about California is the sunsets.

A vineyard yes.  Have a great weekend Kavika!

A vineyard in So. Cal, Central or the wine coutry around Napa?

Been in the Central Valley many times. Actually back in the day I chopped cotton around Firebaugh.

Know the area well.  Firebaugh and Dos Palos actually, Josh Allen country for any Buffalo Bills fans here.  We know his parents from college.  Our families went up skiing together many times.  Kid had a cannon for an arm even back when he was little.

At the north end of the Central Valley here’s a beautiful sunset I’ve enjoyed many times:

When they see the Sundial Bridge, visitors of Turtle Bay Exploration Park in Redding, California might find themselves wondering, “Is it a bird? Is it a plane?” No, but it is certainly a real eye catcher! It is also one of the world’s largest working sundials, which is also pretty cool.

The Sundial Bridge was designed by the Spanish architect Santiago Calatrava. He is famous for representing movement in his designs. The Sundial Bridge was meant to resemble a bird in flight. The bridge was constructed of glass, steel, and granite. The translucent deck allows for viewing of the Sacramento River below.

The Sundial Bridge is a type of suspension bridge. Suspension bridges are made using cables. These types of bridges hold the walkway, or deck, from above rather than from below. The choice to make the Sundial Bridge a suspension bridge was an environmental one. The bridge spans the Sacramento River, which is a habitat for salmon. It is an important place for them to spawn, or lay eggs. Architect Santiago Calatrava’s bridge may look like a bird, but he designed it so that no part of the bridge would be in the river. This design keeps the salmon habitat safe and free from human contamination.

When Santiago Calatrava designed the Sundial Bridge, he considered how it would look, how it would function, and how it would affect the environment. Imagine what would happen if all architects did the same!

A great place to eat with indoor window views and an outdoor deck where sunset is awesome: Enjoy the day and remember to observe a minute of silence to honor those that made the ultimate sacrifice.

I’m glad you liked the pics.

Glad you had a good day. Believe it or not, it is still hard to find a good steak around here. What ever slim pickings there are, are expensive. Will probably just have burgers.

Remember tomorrow at 3 pm is supposed to be a moment of reflection and remembrance.

Yep - We will try to do that all day.

This is a beautiful picture. So serene.

We have had a wonderful weekend so far.  My sister made it up from the Southern Tier.  I haven't seen her in 3 months.  It was so great.  We grilled on Friday, Saturday & today - will do so again tomorrow.

Happy Memorial Day to all