The reversal on Stars and Stripes came as President Trump was in full defensive mode over reports that he had disparaged military personnel.

Trumpism is now in full retreat under a white flag...

The reversal on Stars and Stripes came as President Trump was in full defensive mode over reports that he had disparaged military personnel. 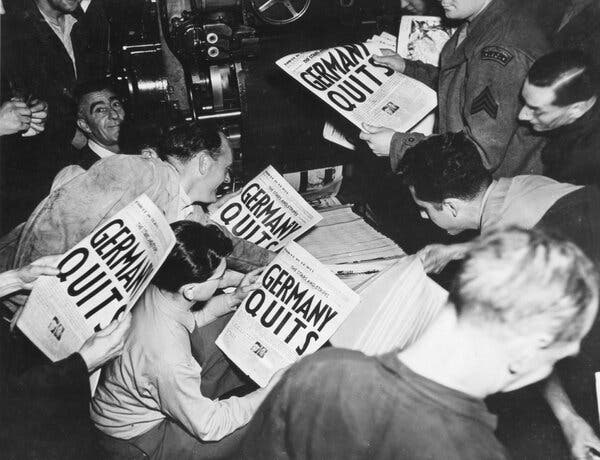 Allied soldiers in London reading copies of Stars and Stripes right off the presses after Germany surrendered in World War II in 1945.Credit...U.S. Signal Corps, via Getty Images

WASHINGTON — President Trump said late Friday that he planned to reverse Pentagon budget cuts that would have permanently closed Stars and Stripes, the military newspaper that has both informed and spoken for American troops over the decades.

Under Defense Department spending plans, the paper would cease print and online publication by Sept. 30, a move seen as expanding the Trump administration's war on news media to include those paid by the government to cover the military.

Yet, while the demise of Stars and Stripes had been in budget cuts first proposed by Mr. Trump's Pentagon in February, the president announced the paper would continue to publish.

"The United States of America will NOT be cutting funding to @starsandstripes magazine under my watch," Mr. Trump posted on Twitter several hours after major news organizations began publishing stories about the pending closure of the newspaper. "It will continue to be a wonderful source of information to our Great Military!"

The reversal came as the White House was in full defensive mode over published reports that the president had disparaged American military personnel killed in the nation's wars. A senior administration official confirmed that Mr. Trump tweeted after aides had showed him news coverage that blamed him for shuttering Stars and Stripes, and so he decided to reverse the Pentagon spending cuts.

Begun during the Civil War, Stripes has more recently frustrated presidents and defense secretaries during the "forever wars" that began after the Sept. 11, 2001, attacks by elevating the voices of those in uniform who contradicted commanders and political leaders.

But while the newspaper found enough backers in Congress and among retired military officers to keep it alive during previous administrations, that support has been unable to reverse Defense Department plans to zero-out the Stars and Stripes budget during a Trump presidency characterized by continuing battles with journalists.

A bipartisan group of 11 Democratic and four Republican senators called on the Defense Department to maintain funding for the publication, which has about 1.3 million readers online and in print. In a letter on Wednesday to Defense Secretary Mark T. Esper, the senators said the Pentagon, with its budget of more than $700 billion, could surely find the $15.5 million in federal funding needed to keep Stars and Stripes going.

"We urge you to take steps to preserve the funding prerogatives of Congress before allowing any such disruption to take place," said the letter, signed by, among others, Senators Dianne Feinstein, Democrat of California; Tammy Duckworth, Democrat of Illinois; and Susan Collins, Republican of Maine. "Stars and Stripes is an essential part of our nation's freedom of the press that serves the very population charged with defending that freedom."

Senator Lindsey Graham, Republican of South Carolina, sent a separate letter to Mr. Esper last month on behalf of the publication and cited "strong support" for Stars and Stripes in Congress. "As a veteran who has served overseas, I know the value that the Stars and Stripes brings to its readers," wrote Mr. Graham, a former Air Force Reserve lawyer who retired as a colonel.

The challenge facing Stars and Stripes — maintaining editorial independence from the government while depending on government funding — is playing out in other parts of the Trump administration.

In February, Mr. Esper, who was appointed by Mr. Trump last year, proposed ending the Defense Department's funding to Stars and Stripes.

The paper has struggled with the same economic challenges of all print publications in the internet age. Advocates also point out that government funding is required because no newspaper, even in the industry's most successful days, could reliably distribute in war zones without financial assistance.

But the Trump administration's decision to kill off Stars and Stripes was especially pointed given the president's public antipathy toward journalists — and his disdainful comments toward military sacrifice surfacing in recent days.

Mr. Trump on Thursday night denied a report in The Atlantic that he had canceled a trip to the Aisne-Marne American Cemetery near Paris in 2018 because he did not want his hair disheveled in the rain — and because he did not believe it important to honor American war dead. According to the article, the president referred to the 1,800 American Marines who lost their lives at Belleau Wood during World War I as "suckers."

But Mr. Trump's denials are hampered by the fact that he has often disdained veterans who had been captured in war, including John McCain, who served as a Republican senator from Arizona.

Signs of a growing discontent among troops for the commander in chief are starting to show.

A Military Times poll released this week showed a continued decline in active-duty service members' views of Mr. Trump, and a slight but significant preference for former Vice President Joseph R. Biden Jr. in the upcoming election among troops surveyed.

Stars and Stripes first started as a publication for Union troops during the Civil War, when soldiers commanded by Ulysses S. Grant overran Bloomfield, Mo., en route to Cape Girardeau. Former pressmen were among the troops, and they set up shop at a local newspaper office that had been abandoned by its Confederate-sympathizing publisher.

Since then, the paper has been on newsstands in military "PX" shopping areas and command tents in places like Langres, France, during World War II and Afghanistan and Iraq more recently. It has published cartoons that lampooned commanders, as well as news articles and commentary that are often at odds with the official view from the Pentagon or the White House.

Max Lederer, the publisher of Stars and Stripes since 2007, said the administration's rolling conflict with the news media had given cover to Pentagon officials to move against the publication.

As an example of articles that he said contradicted the administration's narrative, he cited reporting by Stars and Stripes this year on Fort Hood, Texas, which a recent article called "the Army's most crime-ridden post" after the killing in April of a soldier there, Specialist Vanessa Guillen.

Stars and Stripes staff members first learned of plans to shutter the publication when it appeared in the defense secretary's proposed budget in February.

Stars and Stripes has been a journalistic port of call for the grunt on the ground because it has always been available to them, even during the height of combat.

"The U.S. military as a whole is trying to reduce its electromagnetic signature, and that means service members will likely not have their phones or even access to the internet while in a war zone," said Jeff Schogol, a former Stars and Stripes reporter who now writes for the online publication Task & Purpose. "That's why Stars and Stripes is still vital to keeping troops downrange informed. The Russians and Chinese cannot jam or launch a denial of service attack against physical copies of a newspaper."

Stars and Stripes goes into a level of detail about things that matter to troops that other publications do not. For instance, headlines on Friday included "U.S. Army Japan Eases Travel Restrictions in Time for Labor Day Weekend" and "Face Masks With Valves Are Now Off Limits for Soldiers in South Korea."

Journalists who work for Stars and Stripes have known for months that their publication was on the chopping block, but they said their hope remained that pressure from Congress might save their jobs.

Employees of broadcast operations under the State Department's purview have been expressing similar concerns.

In April, Mr. Trump called Voice of America "disgusting" and urged the Senate to confirm Michael Pack — an ally of Stephen K. Bannon, a former Trump adviser — to head its parent agency. Mr. Pack's nomination languished for two years over concerns from Democratic and Republican lawmakers that he would make federally funded outlets a mouthpiece for the Trump administration.

Since taking over the agency in June, Mr. Pack has fired the heads of the four media outlets and an internet freedom nonprofit under his management. He has threatened to withhold visa approvals for at least 76 foreign journalists at V.O.A., who were recruited to translate news into languages like Swahili and Mandarin, putting many at risk of deportation. In August, he published an internal report alleging "systemic security failures" within the agency, and then suspended many of the remaining career officials in his front office who disagreed with his leadership.

Trumpism Is Now In Full Retreat!

And he's already trying to get praise from his supporters for reversing an action he didn't have to make in the first place.

"In February, Mr. Esper, who was appointed by Mr. Trump last year, proposed ending the Defense Department's funding to Stars and Stripes."

"the Trump administration's decision to kill off Stars and Stripes was especially pointed given the president's public antipathy toward journalists — and his disdainful comments toward military sacrifice surfacing in recent days."

"The United States of America will NOT be cutting funding to @starsandstripes magazine under my watch," - DJT taking credit for fixing a problem he created.

No doubt his gullible half wit fan club will be cheering this action and praising Trump for 'rescuing' Stars & Stripes from himself.

"The United States of America will NOT be cutting funding to @starsandstripes magazine under my watch," - DJT taking credit for fixing a problem he created.

Even Fox is dumping on Esper and crediting Trump for saving the paper, 8 months later in a dramatic last minute reprieve...

after Lindsey Graham joined every other veteran Senator and Congressperson to decry this foolishness in a bipartisan pledge to keep funding the paper.

personally i have no opinion on if stars and stripes should stay up or close down , my thinking is the army , navy( to include marines) and the air force all have their own  paper centric to the concerns of those specific branches , and i was never at a base that didnt have its own base newspaper.