The Treasury Department officially labelled Andriy Derkach, a partner of Rudy Giuliani to smear Joe Biden and help Donald Trump, "an active Russian agent for over a decade, maintaining close connections with the Russian Intelligence Services."

From now on Giuliani is officially a Russian agent... 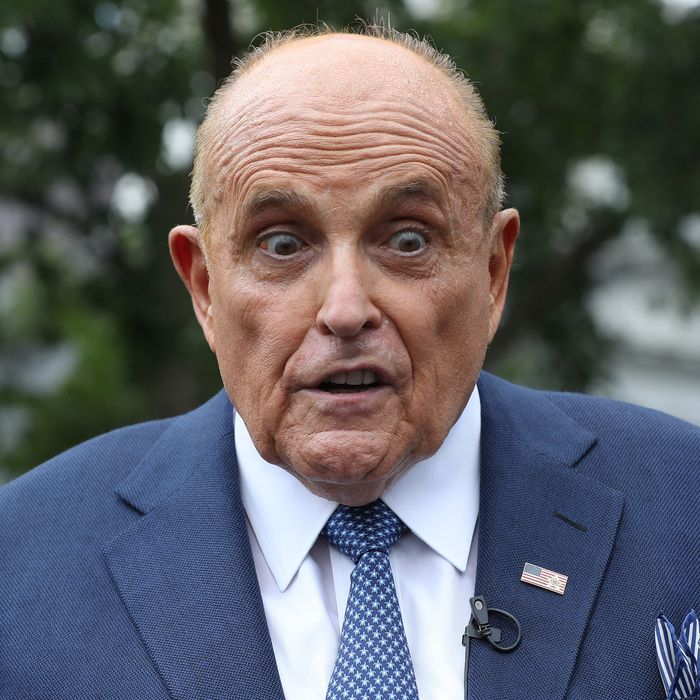 Yesterday, the Treasury Department officially labeled Andriy Derkach "an active Russian agent for over a decade, maintaining close connections with the Russian Intelligence Services." The only person who even claims to find this remotely surprising is Rudy Giuliani, who has been working hand in glove with Derkach for months.

There is an old Simpsons episode in which Homer Simpson, watching a spy movie, blurts out, "I think that guy's a spy!" His irritated wife whispers back, "Of course he's a spy. You just saw him go through spy school!" This exchange is worth bearing in mind as you read Giuliani's response to the "revelation."

Mr. Giuliani said in an interview Thursday night that he "felt comfortable" meeting with Mr. Derkach "because there were no sanctions against him" at the time. While he acknowledged that he "didn't do much investigation" of Mr. Derkach, Mr. Giuliani said: "I have no reason to believe he is a Russian agent. There is nothing I saw that said he was a Russian agent. There is nothing he gave me that seemed to come from Russia at all." But he added, "How the hell would I know?"

Giuliani's reason for not suspecting Derkach as a Russian agent is that he didn't tell him he was a Russian agent. I am not an espionage expert, but I have watched enough spy shows to know that one of the basic practices of foreign agents is not to announce that they are foreign agents. If you have ever watched The Americans , you will notice that Phillip and Elizabeth Jennings do not go around wearing furry Russian hats and handing out KGB business cards. It's basic tradecraft.

Now, the fact that Derkach was advancing Russian interests was hardly a secret. He had previously belonged to the Party of Regions. That's the pro-Russian Ukrainian party that had been financed by Russia, and whose campaign had been managed by Paul Manafort in 2010. If Giuliani had any suspicions in his mind, he could have done a Google search and turned up the fact that Derkach has been closely aligned with pro-Russian figures in Ukraine and attended the Dzerzhinsky Higher School of the KGB in Moscow.

You just saw him go through spy school!

What's astonishing about Giuliani's role is its sheer brazenness. A decade ago, Manafort was paid by Russia to manage the presidential campaign of its pro-Russian party in Ukraine. Manafort owed money to his Russian oligarch boss, and subsequently proceeded to take a job managing the campaign of a pro-Russian presidential candidate in the United States. Then he was convicted of various crimes.

Over the last year and a half, Giuliani has taken on a similar role that Manafort played. He has been strong-arming the reformist elements in Ukraine (which are a threat to Moscow) while using his network of Russian agents to gin up material to smear Joe Biden, in an effort to get Trump a second term. Two of his partners have already been arrested, Giuliani remains under federal investigation, and, oh yeah, Trump was already impeached by the House of Representatives.

But he's still going! Derkach has been giving Giuliani recordings of Joe Biden speaking to Ukrainian officials during his tenure as vice-president. The recordings in fact show Biden advancing the administration's pro-reform agenda in that country, but Giuliani and his Russian partners have presented it instead as evidence Biden was somehow seeking a payoff. The Russian dirt is being disseminated by One America News, a pro-Trump right-wing propaganda network. Trump has been promoting its material on its Twitter feed.

Why isn't Rudy Giuliani locked up as already?

US customs should invalidate his passport so he can't return.  Let Putin keep him.

Trump would just pardon him anyway.

Giuliani is so inept as a investigator and instigator and spy I am almost inclined to let him do his thing and just expose his nonsense later. He has hurt Trump's image far far more than he has helped it.

He is the most physically repulsive looking man out there.  I don't get how he got 3 women to marry him as he is so physically disgusting.

Looks like they took a page from the Clinton campaign I wonder if they will put a dossier.

They already did and they gave it to Pompeo. It was released via a FOIA request and it has hand written notes from Pompeo. It's like reading a c grade movie script.

A lot of Russians around the Trumps.  There just are.