Donald John TrumpCrowd aims 'lock him up' chant at Obama during Trump rallyNevada governor: Trump 'taking reckless and selfish actions' in holding rallyMichigan lieutenant governor blasts Trump coronavirus response: He 'is a liar who has killed people'MORE for holding an indoor rally in Nevada over the weekend, with the Fox News contributor calling the decision amid the coronavirus pandemic "irresponsible."

"Indoor rallies are irresponsible," Fleischer, who served in the George W. Bush administration, tweeted on Monday.

Indoor rallies are irresponsible. Covid-19 is real and this was a bad idea. https://t.co/JGto1F5suc — Ari Fleischer (@AriFleischer) September 14, 2020

The criticism comes after the Trump campaign promoted the event by mocking protests while urging supporters "to gather peacefully under the 1st Amendment" to hear the president speak.

"If you can join tens of thousands of people protesting in the streets, gamble in a casino, or burn down small businesses in riots, you can gather peacefully under the 1st Amendment to hear from the President of the United States," the campaign said in a Sunday statement leading up to the rally.

The decision by the Trump campaign to hold the event in a warehouse in Henderson, Nevada drew similar criticism from other journalists and political pundits from the left and right, with some reporting that masks were worn by "some" or "very few" attendees who also appeared to not practice social distancing. 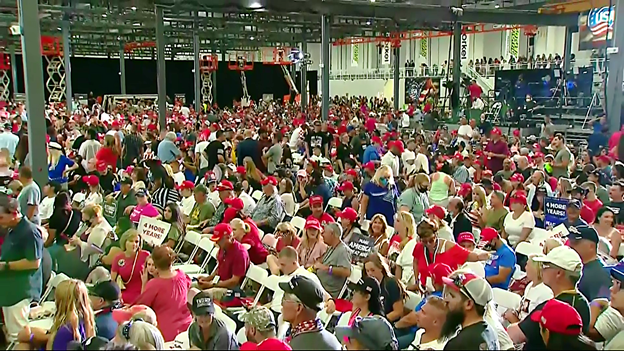 Some people were irked when, with a nod to Orwell, I said Trump was "objectively pro-Covid," but what would you call convening a massive indoor rally amidst a pandemic in violation of state law? — Chris Hayes (@chrislhayes) September 14, 2020

A death cult with all of us along for the tragic ride: 'Shameful, dangerous and irresponsible': Nevada governor blasts Trump for indoor rally against state rules https://t.co/AI7XQB3PR7 — Kara Swisher (@karaswisher) September 14, 2020

"Tonight, President Donald Trump is taking reckless and selfish actions that are putting countless lives in danger here in Nevada," Sisolak said. "The President appears to have forgotten that this country is still in the middle of a global pandemic."

Almost everyone behind Trump was wearing a mask,( for the tv cameras) , and almost everyone in front of him (most of the crowd) was not.

If I were standing behind him, I would wear a mask also just to protect myself from his Big Mac powered flatulence.

The science is out there.  His morons are putting their own lives in danger.  If I have a bottle of poison and someone takes it and dies, it is on them, not me.

It was an unlawful idea in this state and they literally broke the law by endangering the state population holding a rally indoors against all the state mandates.

This won't just affect those supporters who attended, many will get Covid and then pass it on elsewhere. Trump does not care about his supporters, his is just a vile contrarian and hoping to win based on them showing up at a rally to show support. If they die and he still wins he could care less. He will brag about killing his own supporters to get a show of support and they still adore him anyway.

"Ideas" don't supersede the US Constitution. According to Amendment 1, people have the right to peaceably assemble. There's no mention of how many people may peaceably assemble or if their  peaceable assembly can be indoors or outdoors in this amendment.

Congress shall make no law respecting an establishment of religion or prohibiting the free exercise thereof, or abridging the freedom of speech or of the press, or the right of the people peaceably to assemble and to petition the government for a redress of grievances.

Please remember that many governors and large city mayors have allowed peaceful protests as well as chaos, rioting, arson, looting, rape, assaults, etc., without social distancing and masks . They've also allowed hundreds of people to shop in big box stores at one time.

Attendees at President Trump's rallies have had their temps checked before entering outdoor and indoor venues. They are also offered masks and hand sanitizer and are encouraged to use them.